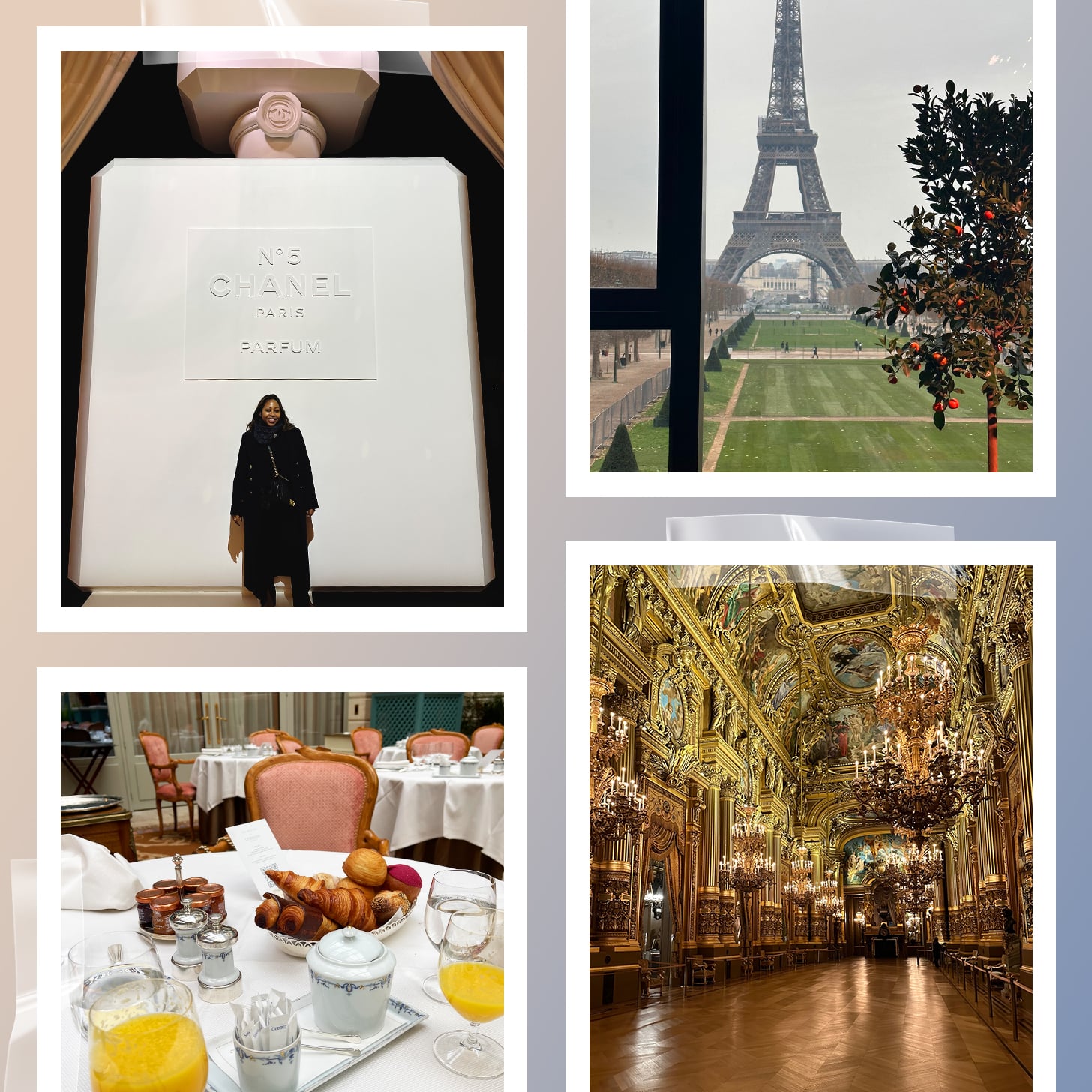 There are few things more dreamy than a week in the City of Light. Add in the luxury fashion and beauty brand Chanel and a stay at the Ritz Paris, and, well, things can get downright magical. Last week, I was invited, along with other editors and influencers, to a special press preview of Chanel’s latest exhibition, Le Grand Numero de Chanel, which is open to the public now through Jan. 9.

It features a visual and olfactory historic tour through the history of the brand’s fragrances, from its iconic Chanel No. 5, created in 1921 by the brand’s creator, Coco Chanel, to the more artistic Les Exclusifs, to smash commercial successes, such as Bleu, Coco Mademoiselle, and Chance. The larger-than-life presentation, where each scent has its own room with a towering rendition of each perfume bottle at its entrance, is currently at the Grand Palais Éphémère, an events space in the Champ de Mars by architect Jean-Michel Wilmotte set in a wooden frame. The top floor overlooks the Eiffel Tower, and Chanel’s set designers reimagined the venue in order to immerse visitors in the world of their fragrances, one of their top-selling categories.

But my time in Paris with the Chanel beauty team included more than just this spectacular — or “magnifique” — display; it also included tours, food, and, of course, a little shopping. Here’s what a whimsical 48 hours looks like in Paris.

At 10:30 a.m., a car picked up me, my mother, and my middle child — a vivacious 2-year-old named Scarlett — from a small boutique hotel in Paris’s 2nd arrondissement and drove us about six minutes to the Ritz Paris at 15 Place Vendome. We went a few days early to take my pandemic baby (she was born April 2020) on her first flight and to experience one of our favorite cities. 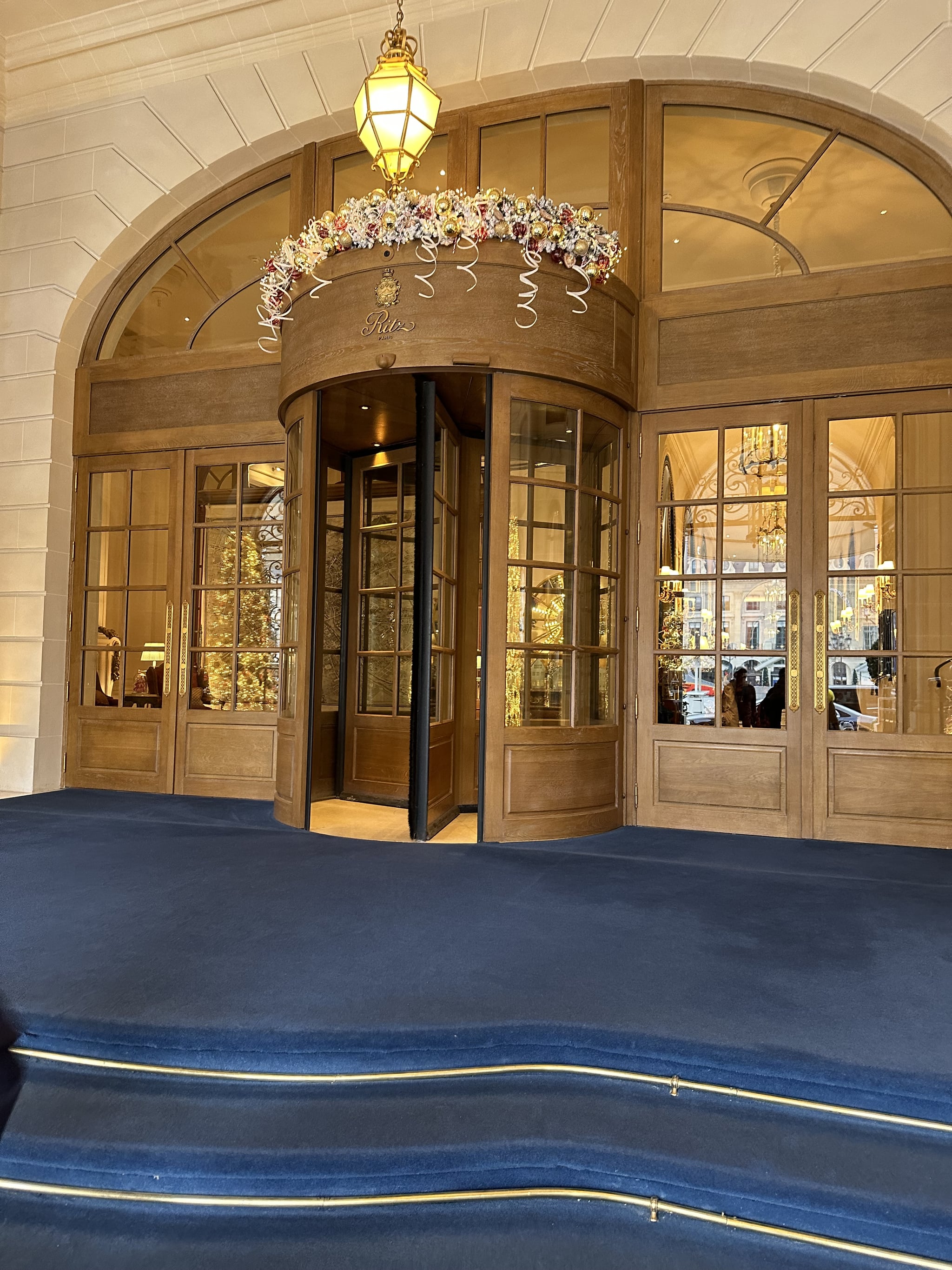 Situated in a former palace, the Ritz Paris was the first hotel to offer en suite bathrooms and is considered one of the top hotels in the world. Immediately upon entering, we were whisked away to a private desk for check-in and soon escorted to breakfast in an opulent dining room, where we indulged in eggs, fruit, and creamy European yogurts. I explained my typical coffee order to the waiter — ice, oat, latte — and after a few chuckles, it arrived perfectly in an elongated glass mug. 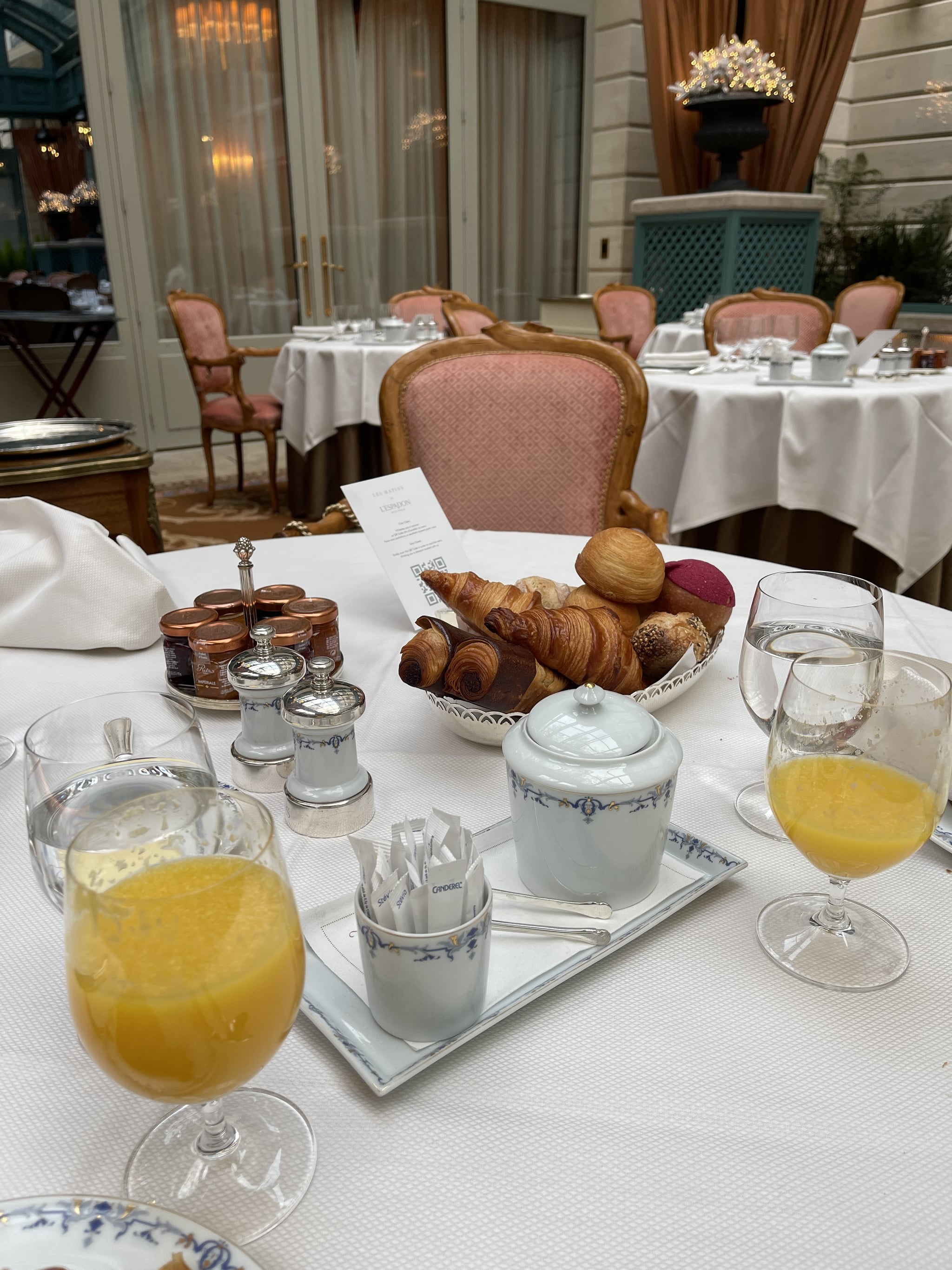 Afterward, we were escorted back to our room, a small suite with a long hallway, king bed, fireplace, sofa, powder room, and bathroom that featured a deep soaking tub and a separate shower room with a bench and golden swan faucets throughout. The windows ran the length of the room and overlooked the garden. As someone who travels a lot for work and traveled a lot as a child, I can honestly say it was one of the nicest hotels ever. It also happens to be the location where Coco Chanel lived for more than three decades. Her first and still the brand’s flagship boutique are a short walk away at 31 Rue Cambon. The hotel even has a suite, Suite Coco Chanel, available for booking.

Later that afternoon, there was a tour available for guests of the Louvre museum — hello, Mona Lisa — which I skipped as I had just visited the day before for Scarlett. In the evening, Mercedes vans picked us up and whisked us off to a new Parisian restaurant called Sugaar, where we dined on crisp white wine and rosé, perfectly rare steak, sizzling fishes, and the creamiest mashed potatoes ever. Parisian food is some of the best, in my opinion. 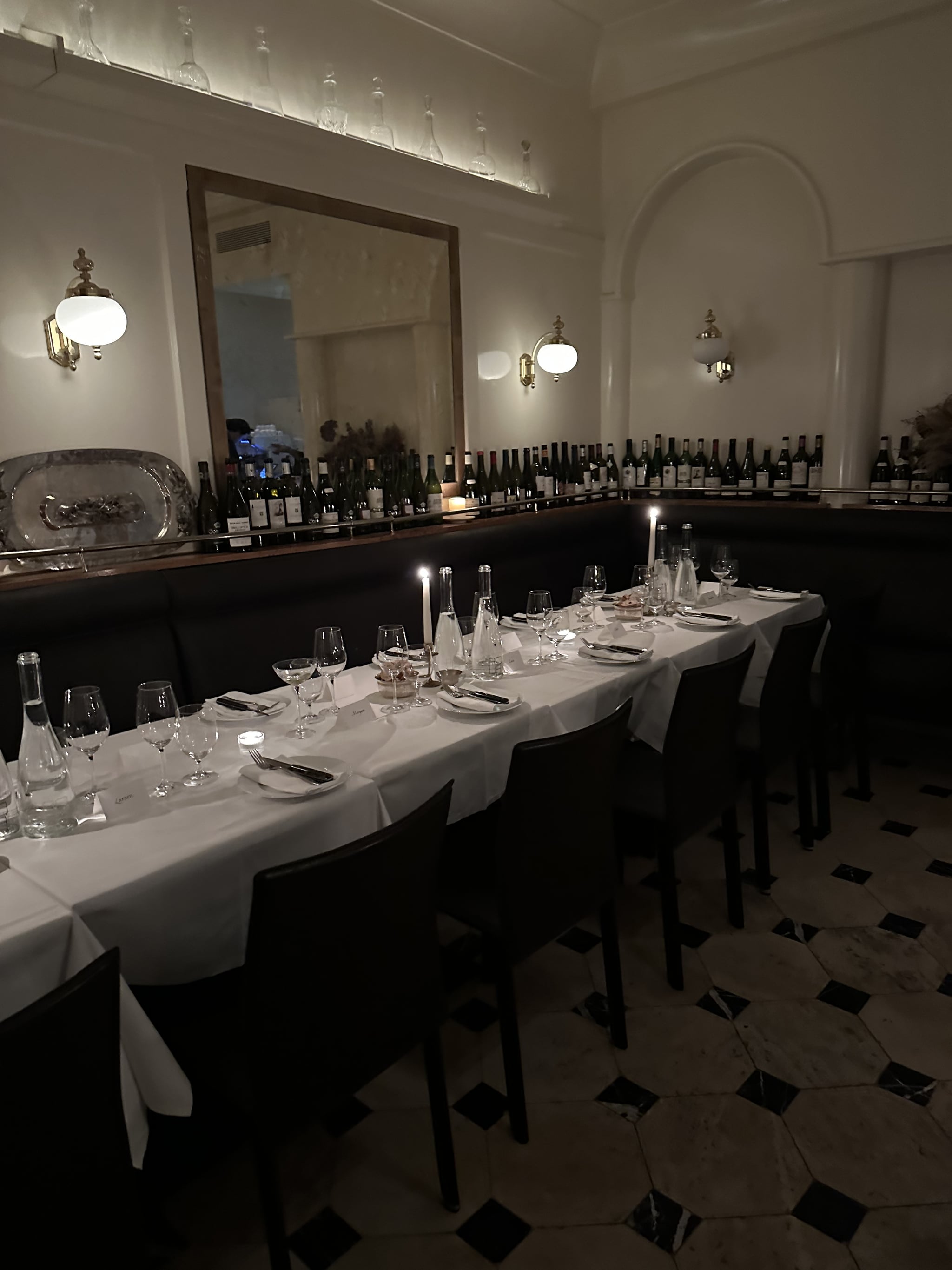 The next day, we all woke up and gathered in the lobby for a guided walking tour of the life of Coco Chanel. As I mentioned before, my mother and I traveled a lot up until my early 30s, when I started having children, and sometime in my late 20s, I really took an interest in walking tours, even in cities I’d been to many times before. They’re a great way to see a location through the eyes of a local and learn more about the history.

Soon, we were outside the Ritz and our guide was explaining Coco Chanel’s residency at the property and how it inspired her designs. For example, the shape of the top of the Place Vendôme — an octagon — in Paris where the Ritz sits and where Coco Chanel lived inspired the top of the Chanel No. 5 bottle. We then walked for about 30 to 40 minutes and learned more about the people and places that inspired the designer, from Misia Sert, an artistic woman who was instrumental in introducing Coco Chanel to society in Paris and remained a close friend until her death. Or the influence of Russians and Russian culture on Coco Chanel — each resulting in a fragrance, Misia ($400) and Cuir de Russie ($250), respectively, and both now part of the brand’s Les Exclusifs collection. At various points in the tour, the guide whipped out scent cards and sprayed them with the Chanel fragrances she was referencing. 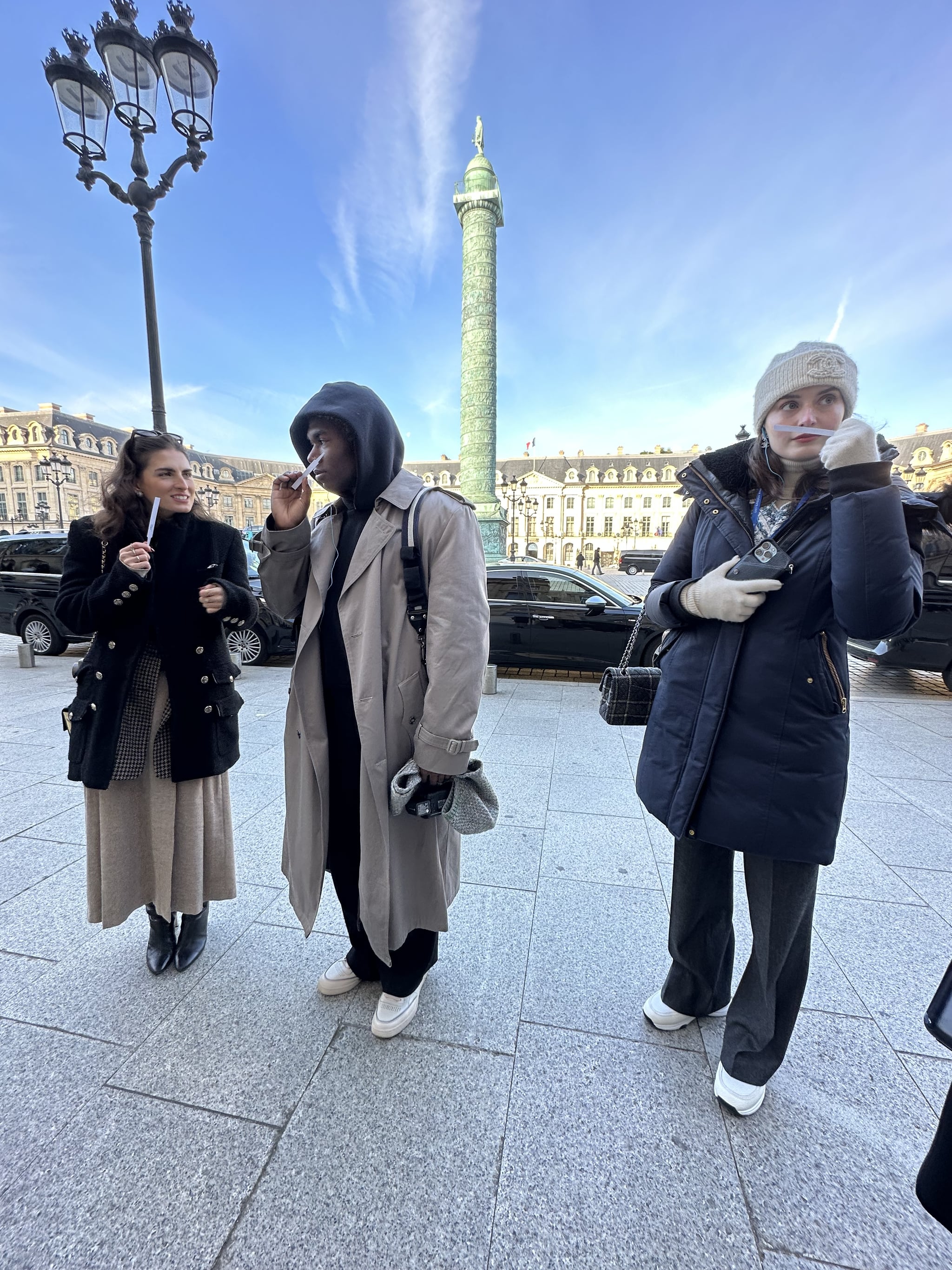 Later in the day, guests were invited to a guided tour of the Musée d’Orsay, and in the evening, we all met in the lobby again for dinner at Caviar Kaspia — another iconic location in Paris that’s known for its baked potatoes with caviar. For some, it was their first time experiencing the delicacy, and the reviews were very good. As is customary, we topped off dinner with crisp vodka. 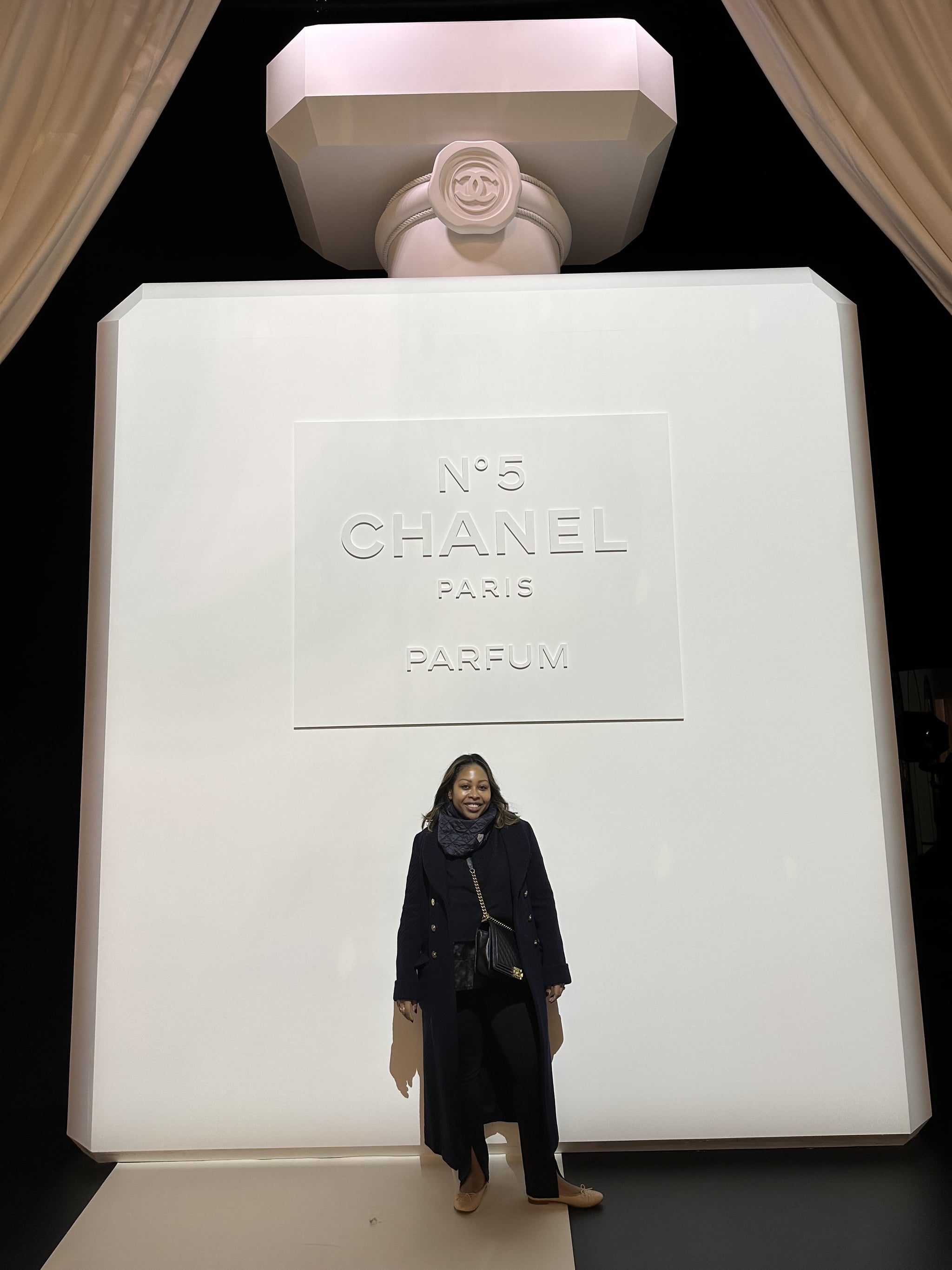 On our last official day with Chanel in Paris, we were whisked away in the morning to a preview of Le Grand Numero de Chanel, an exhibition located at the Grand Palais Éphémère and open to the public until Jan. 9. A historic tour through the brand’s fragrances, upon entering, musicians played, and when we entered the large, circular tent, the brand’s fragrances were displayed in giant renderings that led to different rooms that expressed each perfume or collection of perfumes visually and with scent. 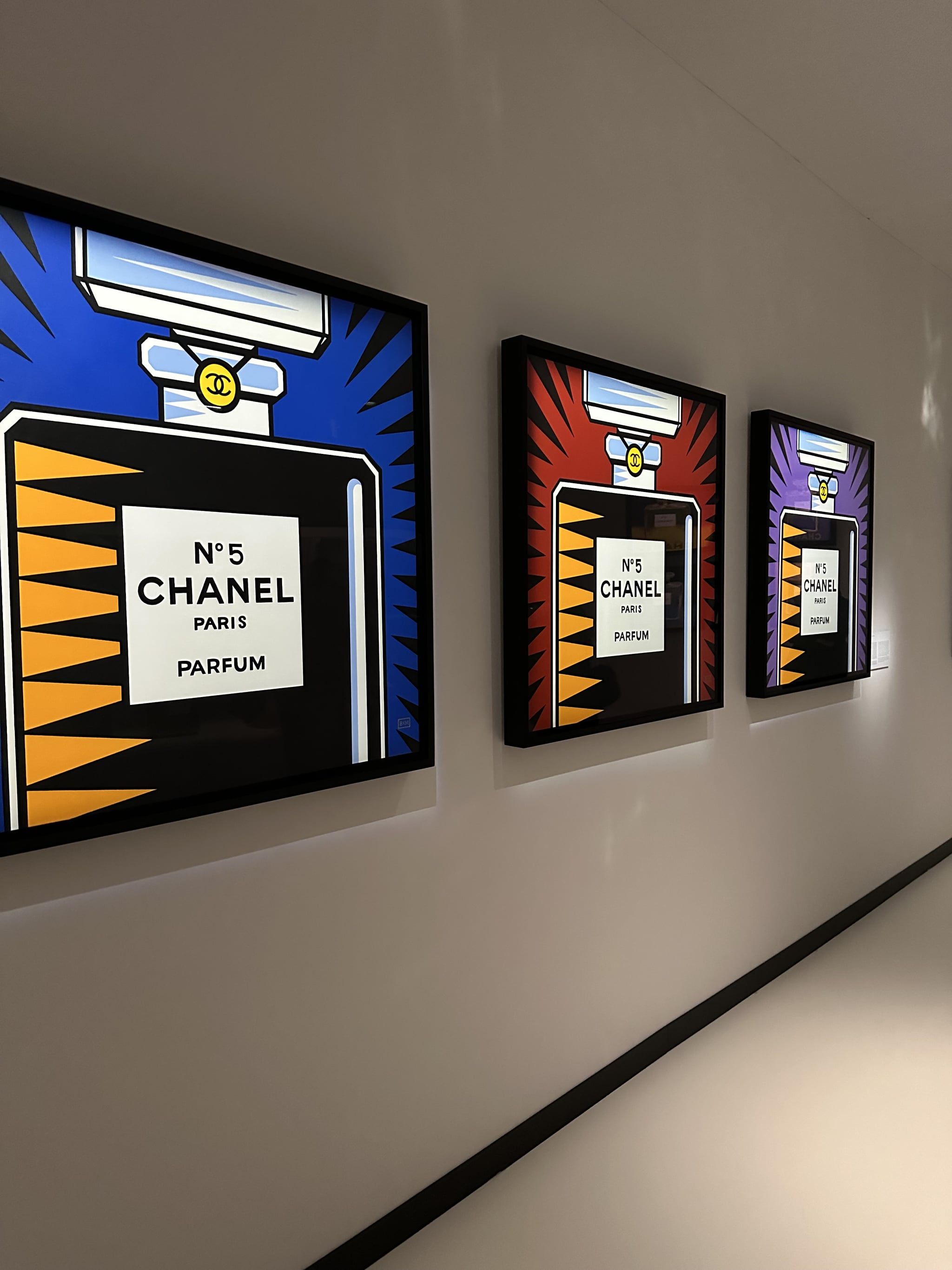 I first entered the Chanel No. 5 room, which was the largest, as it’s the brand’s most famous aroma. Inside were displays with little tidbits on how Chanel No. 5 is created, along with video, photos, and artwork from the scent’s history, including all of its ad campaigns and pieces from Andy Warhol. It also included places where you could lean in and smell the raw materials used in this fragrance, a really cool and unique experience for the average customer who uses and adores the fragrance but might not know all that goes into creating it. 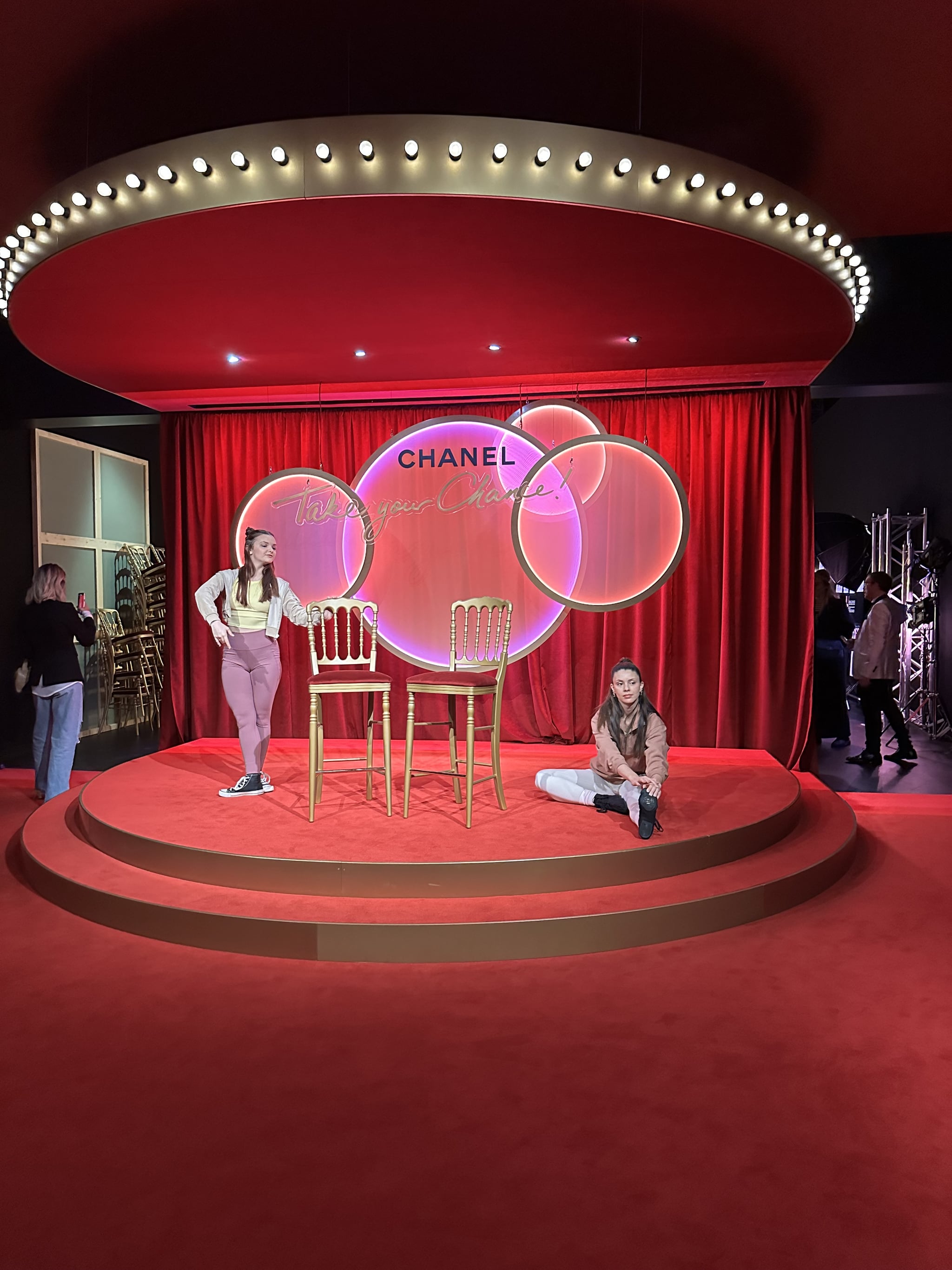 For Chance, it was like a circus with circus performers, and for Coco Mademoiselle, it was all pink, chandeliers, and telephone booths — along with pieces from the larger Chanel collection, including clothing and bags that spoke to the essence of the smell. 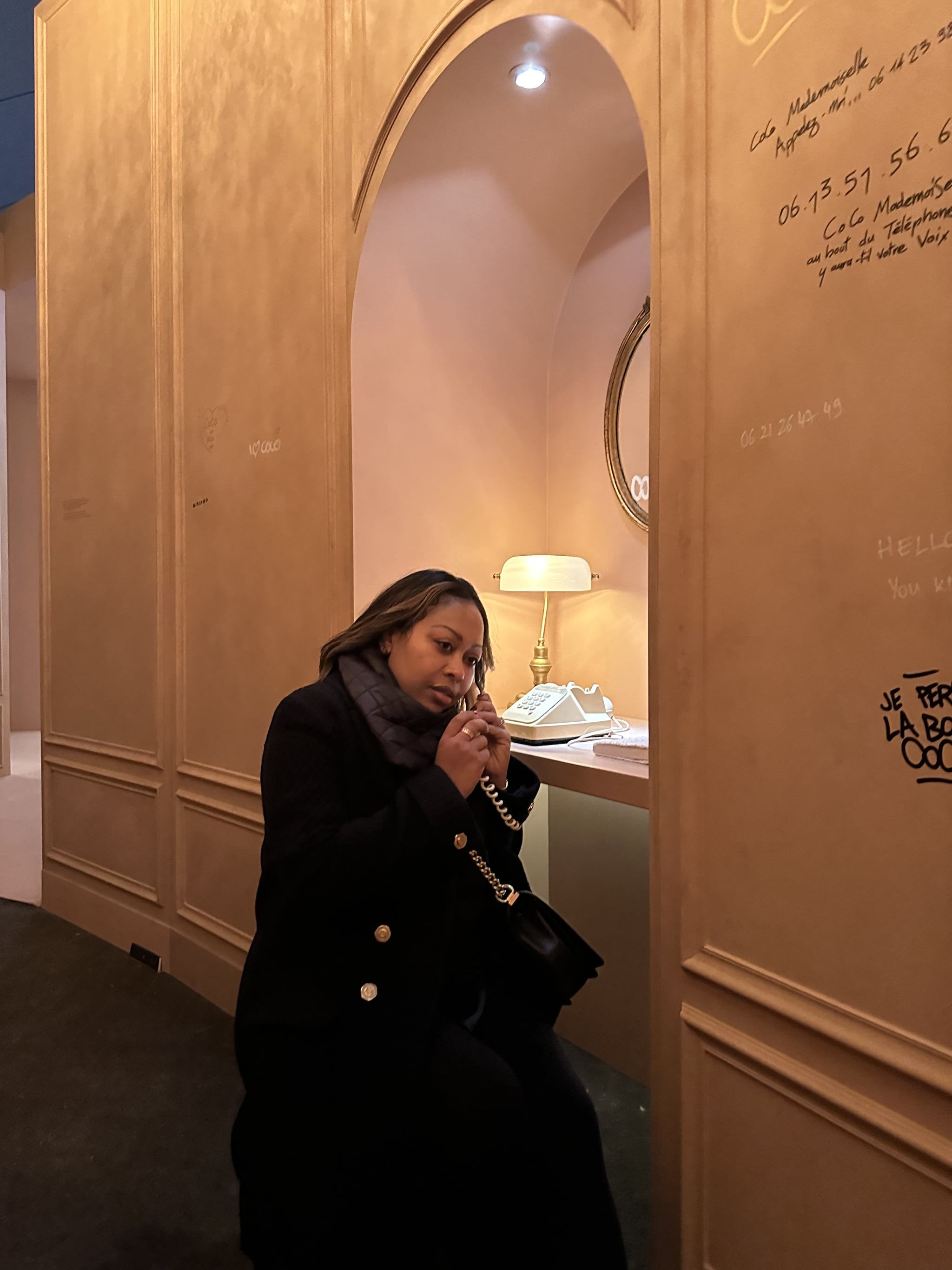 Later that day, I returned for my interview with Olivier Polge, Chanel’s head perfumer, in a room upstairs that had floor-to-ceiling glass windows and overlooked the Eiffel Tower. He chatted with me about why the history of its fragrances is so important to Chanel and why he believes the scents touch so many people.

To cap off the day, and trip, the Chanel beauty team took us on a backstage tour of Palais Garnier, or the Opéra Garnier, an almost 2,000-seat opera house in the middle of Paris that was built from 1861 to 1875 and was the place to see and be seen when it opened. We toured the opulent marble halls, the gilded intermission room, the main stage, the costume studios, and even under the stage. 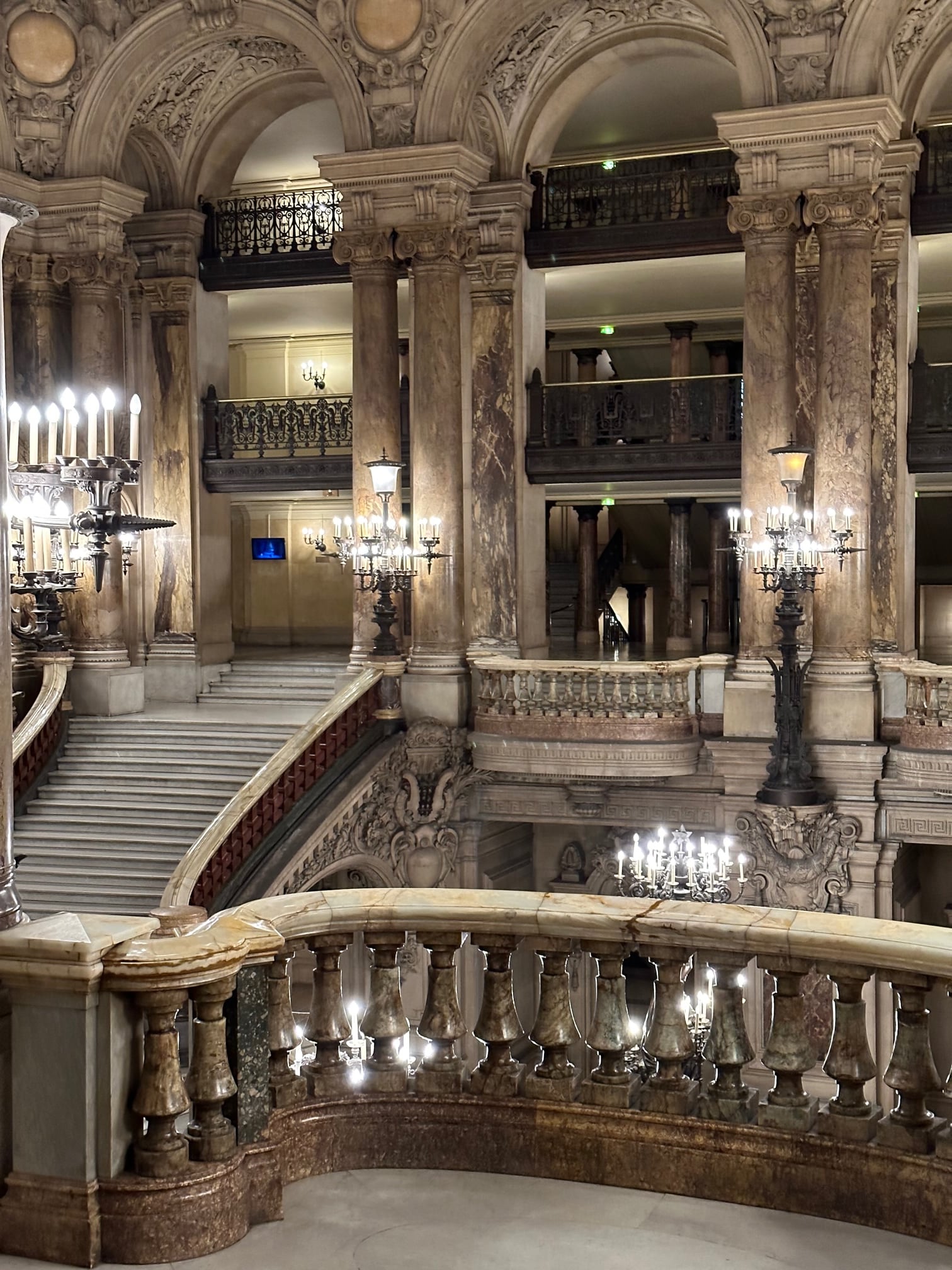 To see all of these historic locations in Paris, coupled with a historic tour through Chanel’s fragrances, it’s not hard to see why Coco Chanel’s designs and scents have remained popular for more than a century.

The next morning, it was time to leave. And after a quick room-service breakfast of pancakes and crepes — I couldn’t decide — I left for Charles de Gaulle airport, more enamored with the world of Chanel than I ever thought possible.