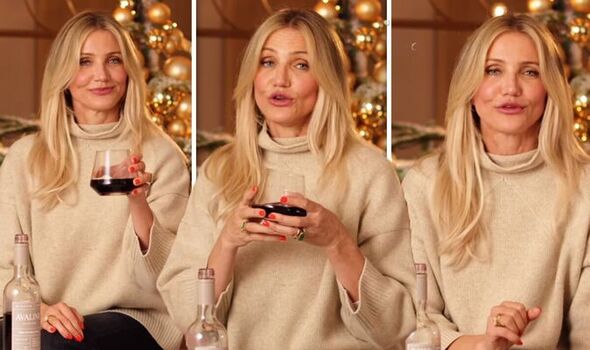 Ageless Cameron Diaz, 50, looks younger than ever as she snuggles up for the holidays

Cameron Diaz looked better than ever as she took to Instagram this weekend to wish for the festive season while also promoting her wine company and her 2006 blockbuster, The Holiday.

Cameron Diaz, 50, appeared to be getting into the Christmas spirit as she shared a short video with her Instagram followers asking them to stay in and watch her 2006 movie, The Holiday.

The mother-of-one can be seen smiling while sitting on a pink couch in a cosy beige turtleneck, black trousers with bright red nails.

She looked younger than ever as she showed off her ageless complexion due to her flawless makeup consisting of a peachy lip and thick eyelashes.

Cameron said in view of her 10.1 million followers: “Can I tip you guys off to the perfect pairing for the holiday season? The Holiday on the television, a glass of Avaline wine and a room full of friends.”

Cameron Diaz showed off her incredibly youthful skin as she sipped on a glass of red wine in view of her 10.1 million Instagram followers. The actress used the video clip to promote her vegan wine brand, Avaline Wine.

Cameron Diaz was promoting her latest venture away from Hollywood

Cameron Diaz appeared to be getting into the Christmas spirit as she recommended her followers to spend the night watching 2006’s The Holiday, while also sipping on her wine.

Cameron Diaz explained to her followers the perfect festive evening

Cameron Diaz said to the camera: “Can I tip you guys off to the perfect pairing for the holiday season? The Holiday on the television, a glass of Avaline wine and a room full of friends?”

Cameron Diaz can be seen smiling on a pink couch

Cameron Diaz cosied up in the Christmas-decorated living room in a beige turtleneck jumper, black trousers and a bright red manicure. The singer complimented her red nails with her red wine, as she sipped on her vegan brand.

Cameron Diaz’s post mentioning The Holiday comes days after Kate Winslet shut down rumours of a sequel after it was claimed that the original cast was reuniting for a movie. She told The People: “I read something about that, but it’s the first I’ve heard of it. I promise you that no agent, representative, or anyone from the first one around has had any conversation with me about that. Hand on heart, that’s never coming up.”

The Holiday was written and directed by Nancy Meyers and told the tale of Surrey-based journalist Iris, played by Kate Winslet, who swaps homes with Amanda, played by Cameron Diaz, a movie producer from Hollywood, following respective heartbreaks. While in Surrey, Amanda finds romance with Iris’s book editor brother, widower Graham, played by Jude Law, while Iris meets Miles, played by Jack Black, and dates him.