Alesha Dixon, 40, looked sensational on the third live episode of Britain’s Got Talent this week as she rocked a glamorous sequinned gown which showed off her long legs. The former Mis-Teeq singer took to Instagram to debut her look for tonight’s live show, causing fans to gush over her attire. The beauty looked the epitome of chic as she channelled Diana Ross in the sparkly ensemble. The gorgeous dress featured high shoulder pads reminiscent of 80s fashion with a v-shaped neckline.

The long-sleeved dress drew attention to her blossoming baby bump, which took centre-stage in the shot.

She finished her look with a pair of open-toe heels which featured jewelled detail to match the elegant gown.

Making sure all eyes were on her, the beauty pulled her dark tresses into a top-knot bun showing off her stunning looks.

Alesha kept her make-up bold, as she sported smokey-eyes, a hint of rouge blush and a dark lip.

Fans rushed to compliment the star on her outfit, as one person gushed: “Why are you so pretty! Congrats by the way.” 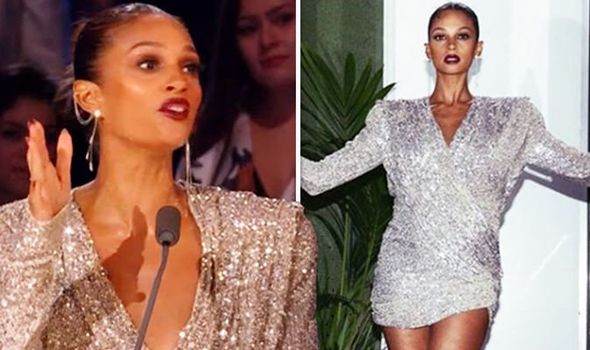 Another person commented: “Wow you are still the ultimate woman!”

Meanwhile, Alesha announced she was expecting her second baby live on Britain’s Got Talent earlier this week where she unveiled her baby bump.

During the show’s introduction, presenters Ant McPartlin and Declan Donnelly cheekily announced the pregnancy during their musical number.

The singer told the talent hosts she was “over the moon” about her impending baby arrival.

The TV personality is mother to five-year-old daughter, Azura, with her partner Azuka Ononye.

She rose to fame as a member of R&B trio Mis-Teeq and pursued a solo career after the band split.

The singer has also starred as a judge on Strictly Come Dancing, before leaving to join Britain’s Got Talent in 2012.

She was previously married to Michael Harvey, Jr – known as Harvey – who rose to fame for his stint in English rap group So Solid Crew.

The pair married in 2005 after five years together but divorced in 2006.

Britain’s Got Talent semi-final continues tonight on ITV at 9.30pm.