Willie Spence has passed away.

The singer, who became runner-up during season 19 of American Idol, was in Tennessee Tuesday when he was injured in a car accident before later passing away. He was only 23 years old. SO young!

At the time no further details have been released, however, not long before his death, the star posted a video on Instagram of him singing, which he captioned:

“Lord you are my hiding place”

Fans quickly rushed to the comments after learning of the news, writing things like:

“Fly and sing with the angels and dance amongst the stars friend! RIH”

“Omg I am so at a loss for words. Not you Willie! Wow…  Rest in Paradise, king”

“Can’t believe this. Rest up bro.”

American Idol season five alum Katharine McPhee, who shared a duet with the late singer, confirmed the news via her IG story, posting a throwback video of the two first meeting, writing:

“I received very tragic news tonight. Sweet @williespenceofficial passed away in a car accident. Only 23 years old. Life is so unfair and nothing is ever promised. God rest your soul Willie. It was a pleasure to sing with you and to know you.” 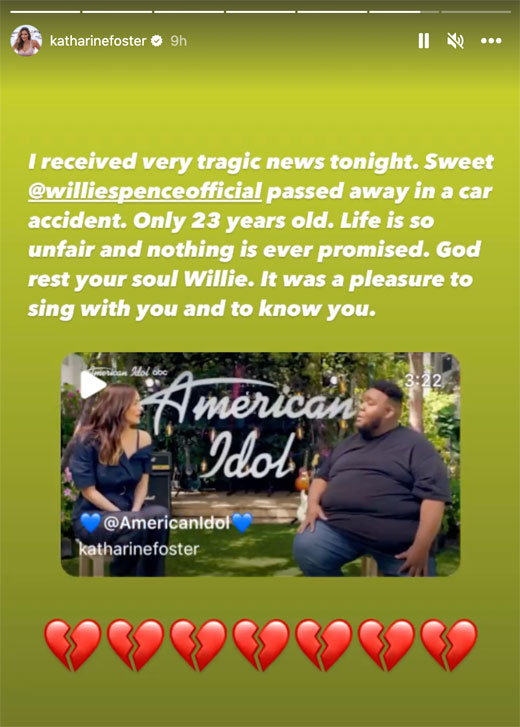 Take a look at his amazing vocal talent (below):

The world will miss you, Willie. Rest in peace.