Beyonce stepped out in a pastel green mini dress with towering pumps for a romantic night with Jay-Z. See the gorgeous pics!

Beyonce, 39, and JAY-Z, 51, have been spotted out-and-about in Portofino while yachting around Europe. The A-listers were photographed walking hand-in-hand while heading to dinner in the Italian village on September 11. Bey rocked a mint green mini dress with a matching jacket and towering green pumps while Jay-Z donned a white jacket and black pants along with white sneakers. 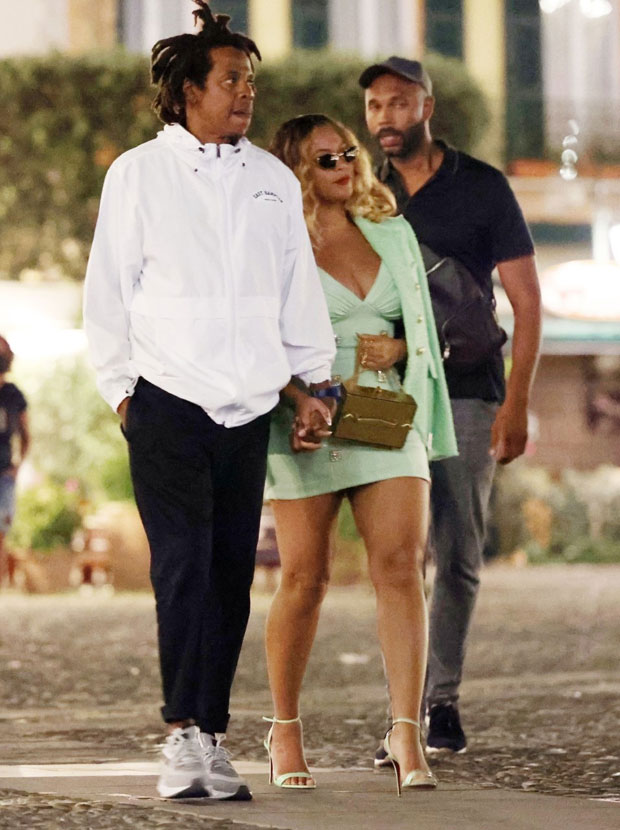 Bey carried a beige handbag and accessorized the look with dark shades as she styled her caramel tresses in loose waves. Earlier in the day, the duo were spotted on Amazon boss Jeff Bezos‘ yacht off the coast of Ponza. The couple embraced each other while taking in the scenic ocean views from a hot tub on the megayacht named Flying Fox.

Bey wrapped a towel around her body and pulled her brunette tresses back in a loose bun. Meanwhile, Jay-Z donned a pair of light blue swimming shorts as he planted a kiss on Bey’s head. The duo were most recently seen in Tiffany & Co.’s new “ABOUT LOVE” campaign. Bey is now one of the very few people to get the opportunity to wear the Tiffany Yellow Diamond which weighs 128.54 carats and includes 82 facets.

The “Crazy In Love” singer also recently celebrated the big 4-0, and it’s all eyes straight ahead as she begins a new decade in her life, one insider told HollywoodLife. “Beyonce is looking forward to the next chapter of her life as she turns 40,” a source said. “She has accomplished so much and experienced things that many people could only dream about. And while she’s looking forward to seeing where her career takes her over the next decade.”

The singer, who married Jay-Z in April 2008 after dating for 7 years, have a beautiful family together. The family is so tight knit that they even work together! Daughter Blue Ivy, 9, is the second youngest Grammy winner for her work with her mom on her track  “Brown Skin Girl” Blue’s twin siblings Rumi & Sir, 3, starred in their mom’s Disney Plus project, Black Is King.