Despite being blocked by the ‘My Last’ rapper, the person continues to further troll the ‘I Do It’ spitter by digging up more old lyrics from his catalog to make his case.

AceShowbiz –Big Sean seemingly is not open for criticism. A Twitter user claimed that the “Deep Reverence” rapper blocked him on the platform after he attempted to mock his lyrics from the star’s catalog. In one tweet, the user, who goes by the name @jaidvan, labeled Big Sean “the worst rapper.”

It started after the person reacted to a tweet which read, “Who’s the worst rapper you’ve heard n why is it Big Sean.” He answered the question with bars from Big Sean’s song titled “I Do It” in which he rapped, “I’m Quagmire I f**k h**s, my cashflow I ‘giggity-get’ it.”

Apparently, the former boyfriend of Ariana Grande caught wind of the tweet and responded to it. “I’m surprised u even remember stuff I did over a decade ago, especially if u didn’t like it lol,” he wrote. “Love man, I out grew that line n a lot of my old stuff myself too, but I have also gone platinum like 50 times after that lol. I pray u live out ya dreams like I have fasho.” He has since deleted the tweet.

Meanwhile, the user further trolled Big Sean by digging up more old lyrics from his songs. One of them were lyrics from “Blessings” that read, “I guess when your stars align/ You do like the solar system and plan it out.” 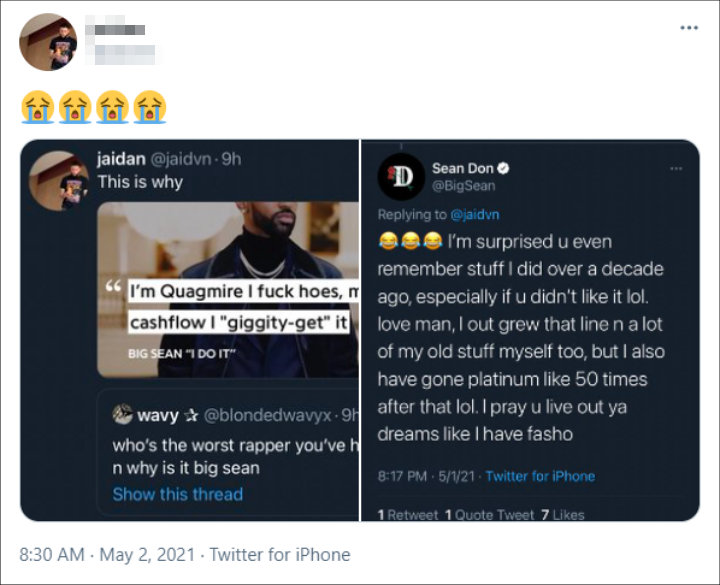 The trolling aside, Big Sean recently opened up about his mental health struggle in an interview with ESSENCE. The rapper, who went public with his struggles in 2019, shared, “I was just being honest. I was just keeping it real because I was tired of not keeping it real. I was tired of pretending I was a machine and everything was cool and being politically correct or whatever. I just was like, I’m a just say how I feel.”

It was also revealed that he and his mom, educator Myra Anderson, are teaming for a video series via his nonprofit, the Sean Anderson Foundation, which supports underserved youth and their families. Set to be released every Saturday at 12 P.M. EST/9 A.M. PST during the month of May to commemorate Mental Health Awareness Month, the videos will feature the duo bringing awareness about mental health issues.