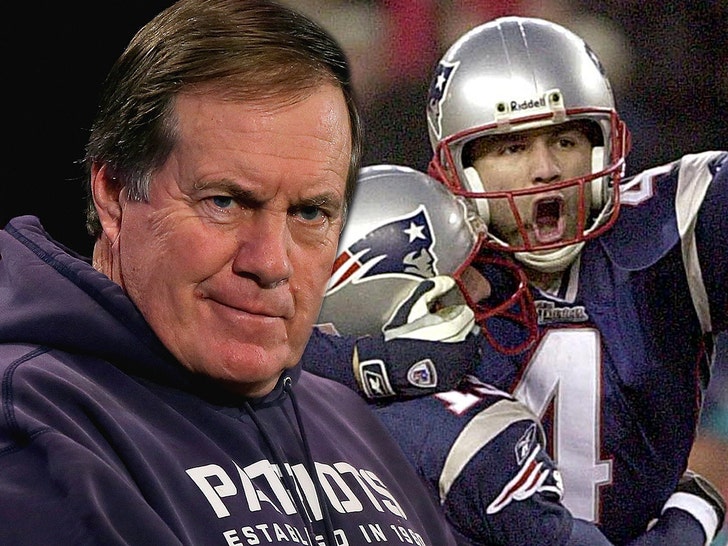 The Patriots head coach raved about the 48-year-old kicker as the G.O.A.T. after he announced his retirement on Wednesday — and pointed out Vinny’s game-winner in the legendary “Tuck Rule” game is the greatest single kick of all time.

“His consistency, mental toughness and performance under pressure was legendary. I am honored to have coached Adam, going all the way back to his rookie year in 1996 and through some of the most special moments in Patriots and league history.”

“Adam is in the rarest echelon of athletes whose career accomplishments may never be matched.”

Adam was obviously known for coming through big in clutch moments — including game-winners in TWO different Super Bowls.

Vinny not only hit a 45-yarder to tie up the game with seconds remaining in the 4th quarter — but he also hit the 23-yard, game-winner in overtime to seal the victory and send the Pats to Super Bowl XXXVI.

The rest is history …

Pats owner Robert Kraft also praised Adam in a statement … saying, “Adam Vinatieri earned the respect of his teammates and Patriots fans everywhere in 1996 when he caught Herschel Walker from behind for a touchdown-saving tackle on a kickoff return.”

It’s true … and an AMAZING moment!

“For the next 10 years, that respect and admiration grew with every clutch performance and game-winning kick, especially his iconic 48-yard field goal as time expired in Super Bowl XXXVI.”

“For Patriots fans, the feeling of that first Super Bowl championship will never be replicated. As memorable as Adam’s Super Bowl performances were, he will always be remembered in New England for the greatest field goal in NFL history – the game-tying 45-yarder in the snow bowl against the Raiders.”

“He retires as the NFL’s all-time leading scorer and I am certain will soon be celebrated as a Patriots and Pro Football Hall of Famer.”