After Carly Waddell was rushed to the hospital, the ‘Bachelor In Paradise’ alum shared how she was ‘incredible pain,’ and she still doesn’t ‘have any answers’ as to why she was sick.

“I feel like I’ve told this story to my family, like, a million times already, but I know that you guys were wondering what happened to me on Monday,” Carly Waddell said at the start of the fifteen-minute video that she posted on June 20. The update came nearly a week after her ex, Evan Bass, revealed that Carly, 35, had been rushed to the hospital. Evan, 38, didn’t share what caused Carly to require emergency medical attention, so her fans were eager to hear the cause of her illness. “I was waiting in line for the plane,” she said, “[and] started having some really bad intestinal cramps.”

“And when I say really bad, they were what I would compare to contractions,” said Carly. “They were unbelievably bad.” At first, Carly chalked up the pain to something she ate, but after boarding the plane, she knew something was wrong. “I couldn’t breathe anymore. Then, I got super, super hot and super, super nauseous, and I stopped being able to see, and I stopped being able to hear.”

Carly explained that when she tried to stand up and leave the plane, she “passed out.” The paramedics arrived and determined needed to go to the hospital – where things continued to get worse for the Bachelor In Paradise alum. “I probably threw up 20 times,” she said. “I was so dehydrated somehow that they couldn’t — they stuck me, I don’t know, 200 times — probably at least 20.” Carly said she had low blood pressure and a “super high” white blood cell count. “They said it was probably a virus or bacteria that just got me and got me really good,” she added. “I don’t really have any answers. I just was, like, really down for the count. The only thing that really helped was fluid and time.” 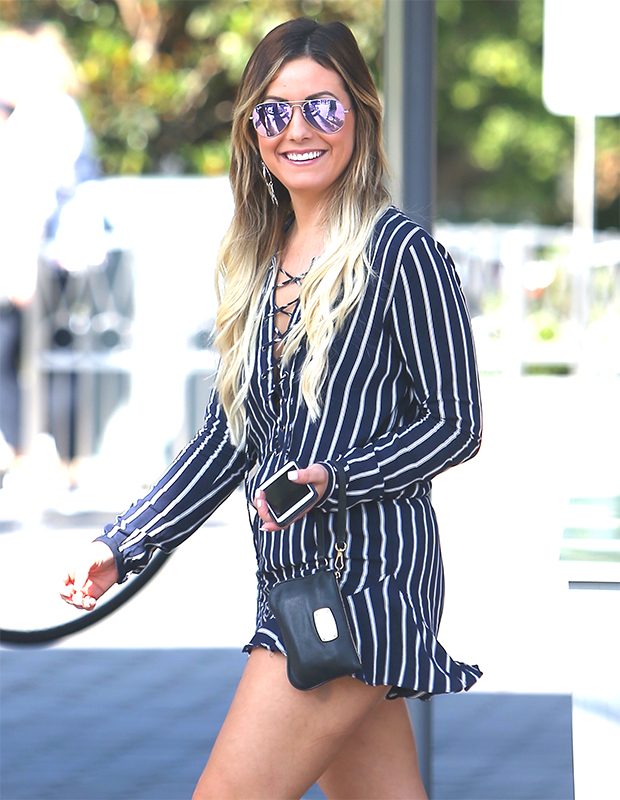 “[The doctors] basically still don’t know what was going on,” she added. “They said it was probably a virus or bacteria that just got me and got me really good. Ever since that day, I’m still having really bad intestinal cramps, but they’re not like they were. But they’re not great. And randomly getting nauseous.”

It was Evan — Carly’s ex and father of her two children – who let everyone know about her medical emergency. “Carly’s first ambulance ride,” he captioned the photo he posted to his Instagram Story. Evan reassured everyone that “she’s gonna be ok” but that she was “in pretty rough shape” after the visit.