Cara Delevingne kept a low profile on Monday as she arrived to Charles de Gaulle Airport in Paris for the city’s fashion week.

The model, 30, went incognito as she sported a marble face covering, donning a panel checkered suit for the appearance.

But the arrival comes after a string of erratic behaviour, including a recent incident at Van Nuys Airport – where she appeared disheveled while preparing to board the Jay-Z owned puma private jet.

The incidents have allegedly sparked concern for her personal wellbeing – with claims circulating that her family are set to stage an intervention.

Masked: Cara Delevingne, 30, cut a low profile on Monday in a checkered two-piece suit as she touched down in Paris for the city’s fashion week 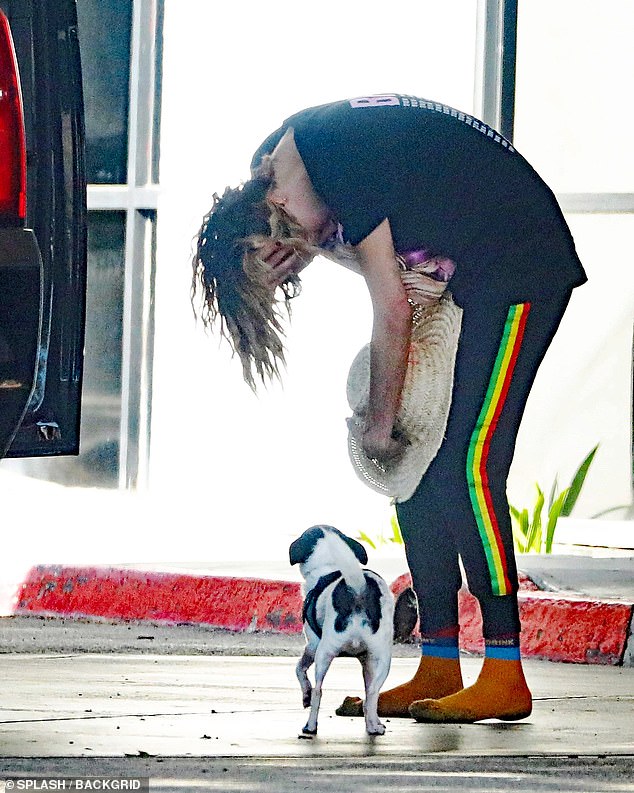 Unusual behaviour: Fans began to worry about Cara, following a seemingly erratic appearance as she headed to the Puma private jet owned by Jay-Z on September 5

Arriving in the city of fashion, Cara sported a pair of tailored trousers with differing navy, red and white checkered designs on each leg.

She teamed the statement trousers with a matching blazer of the same design, breaking it up with a plain white long-sleeved T-shirt.

The London native finished the look with a pair of black lace-up shoes – wrapping headphones around her neck for the journey. 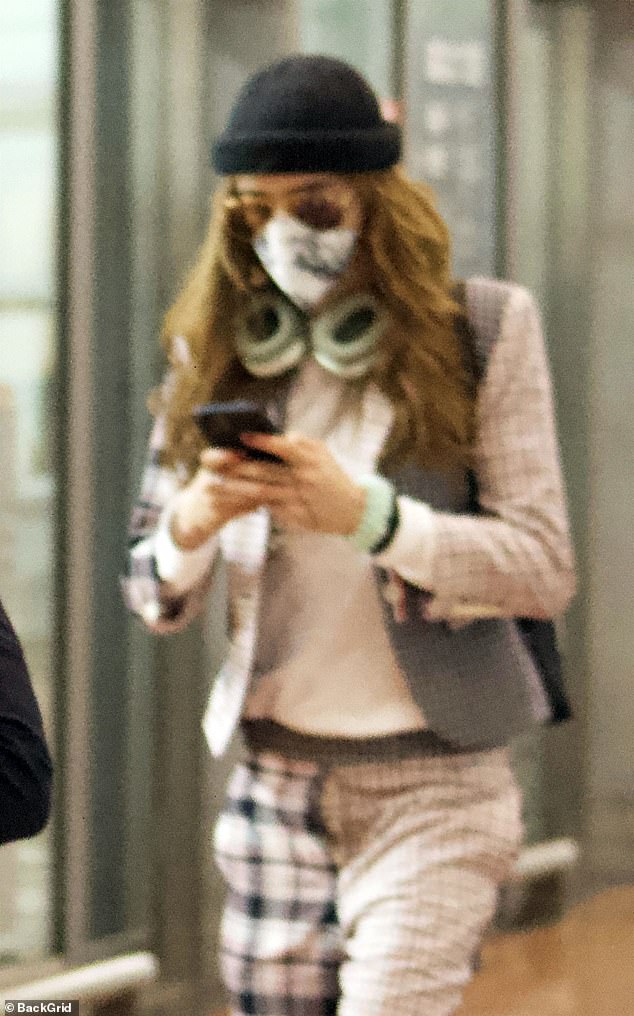 Co-ord: Arriving in the city of fashion, Cara sported a pair of tailored trousers with differing navy, red and white checkered designs on each leg – teamed with a matching blazer 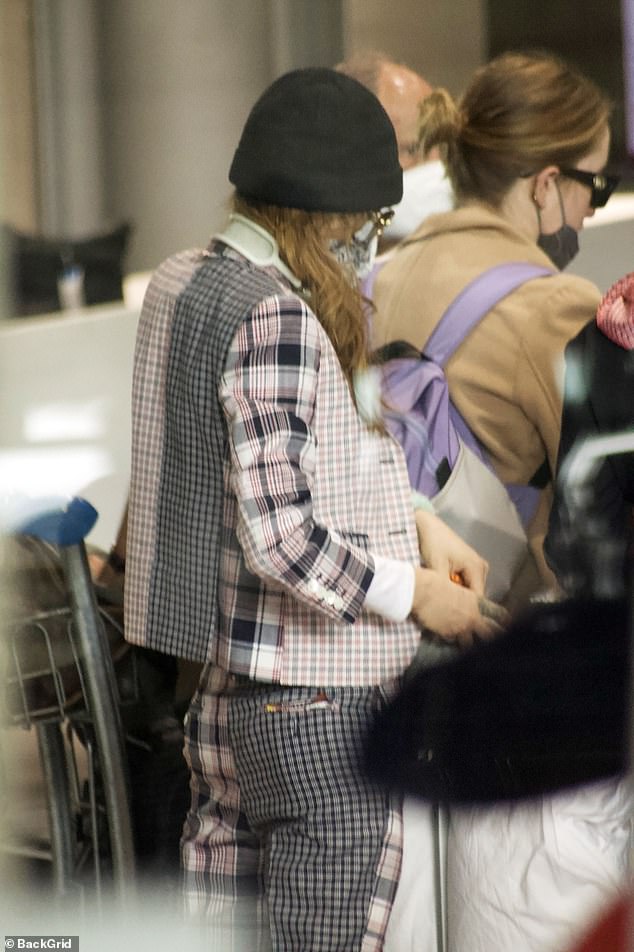 Low-key: The star was almost unrecognisable in the shots, adding aviator sunglasses and a beanie alongside her marble Covid-19 mask

And the star was almost unrecognisable in the shots, adding aviator sunglasses and the marble Covid-19 mask.

Making her way through the airport, she kept her head down and eyes fixated on her mobile phone.

Cara arrived in the French capital for day one of fashion week, which saw style icons such as Naomi Campbell and Bella Hadid take to the Burberry catwalk.

Kicking it off: Cara arrived in the French capital for day one of fashion week, which saw style icons such as Naomi Campbell and Bella Hadid take to the Burberry catwalk

The appearance comes after a New York Fashion Week blunder from the model, which saw her fail to attend the official launch of her brand new capsule collection CARA LOVES KARL – an exciting collaboration with the late Karl Lagerfeld’s iconic fashion house.

The model’s fans have been voicing their worries for the star after she was seen smoking a pipe of some kind while sitting alone in a car earlier this month, before appearing erratic and out of sorts at an Airport in Los Angeles.

Now, her friends and family are searching for ways to help the troubled former ‘it girl’. 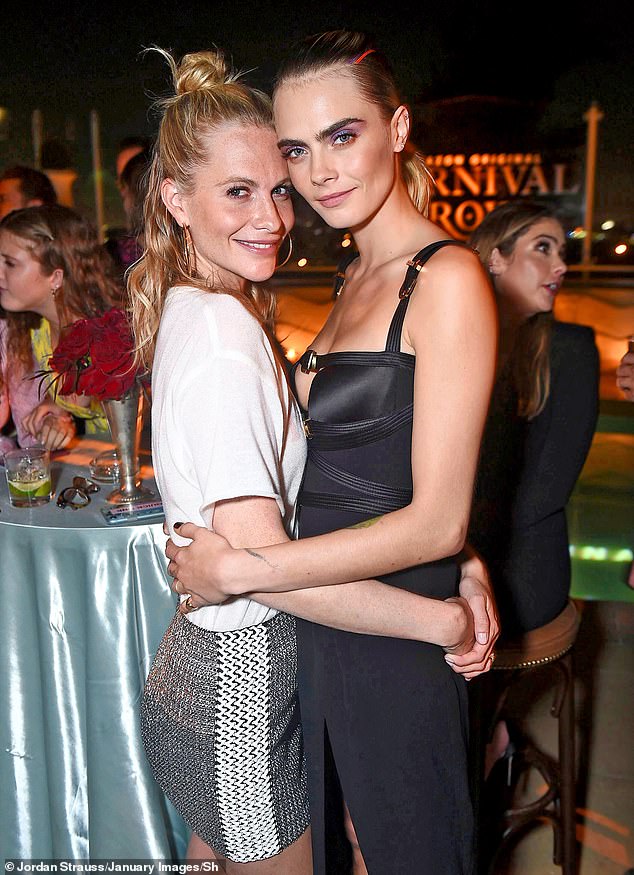 Close: Cara with her supportive model sister Poppy. It’s understood that her family are now planning an intervention in a bid to help the troubled star

‘We are all incredibly concerned. The situation has been building for a few weeks now, and Cara’s family is involved,’ a close friend told The Sun.

‘There is talk of staging some kind of intervention and making sure Cara gets the help she may well need,’ the person added. ‘She has been burning the candle at both ends of late, and it’s clearly taking its toll.’

Of the airport appearance in early September, sources told DailyMail.com that the cover girl appeared unable to control her body movements at certain points as she was seen on the phone, bending over, dropping her phone, and walking around looking very jittery and as if she was unable to stop moving.

Prior to this, she spent some time at the Burning Man festival – with sources telling DailyMail.com at that time the she didn’t eat or shower while at the event.

The source said: ‘She had just spent days in the desert, not eating all that much and she looked disheveled because she hadn’t had time to scrub up yet.’

He went on: ‘Her friends are worried about her generally after some erratic behavior, but she has a good group around her. Her sister was at the festival with her. She wasn’t alone and she has her back.’

The source continued: ‘Burning Man isn’t lined with burger vans like other festivals. You chuck everything you need in an RV and that’s what you have to live on while you’re there. Everything works on a swapping system.’ 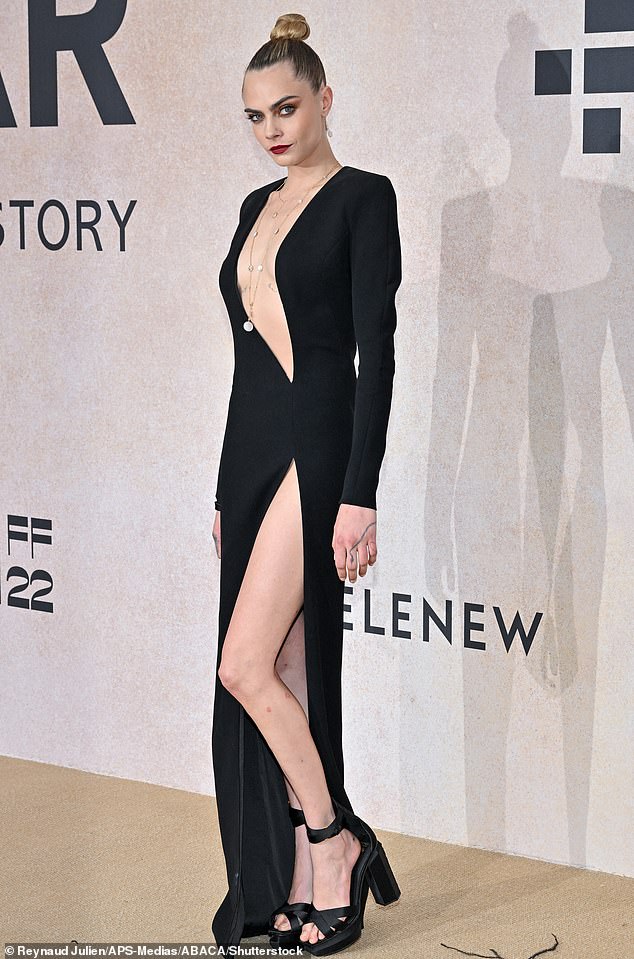 Worried: ‘We are all incredibly concerned. The situation has been building for a few weeks now, and Cara’s family is involved,’ a close friend told The Sun (Cara pictured in May this year)