Catherine Zeta-Jones remarked that she has ‘so much to be thankful for’ in a short caption as she posted a video of her family dinner.

Catherine Zeta-Jones, 51, was glowing on Thanksgiving. The Welsh-born star posted a short video of her family dinner with husband Michael Douglas, 77, along with their children, daughter Carys, 18, and son Dylan, 20, on Thursday, Nov. 25. “Happy Thanksgiving to all. So much to be thankful for,” she captioned the short clip.

In the selfie-filmed video, Catherine captured a glimpse at the family’s New York City dining room, which was decked out with orange and red fall foliage as decor. Each appeared to have a plate of food in front of them, as an appetizer sat in front of Catherine. “Happy thanksgiving everybody!” she said in the video, as son Dylan cheered, “Woo, happy Thanksgiving, everybody!”

Carys demurely waved with both hands in the background, opting to wear a classic black turtleneck for the low key family dinner. Meanwhile, mom Catherine looked straight off the red carpet in a cherry colored silk dress with purple accents. The Oscar winner kept her raven colored hair back in a low, center parted bun, showing off her black drop earrings. Michael was decidedly more casual, going with a long sleeve black shirt for the occasion. 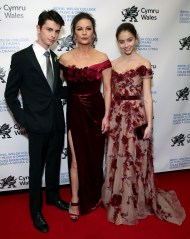 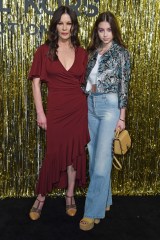 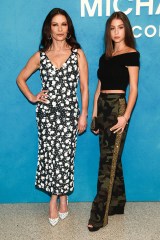 Earlier in the week, the Chicago star shared a preview of her Thanksgiving decor — including her gorgeous table. “I’m just going to show you my preparation for Thanksgiving — just the beginning,” she narrated as she filmed the gorgeous orange, yellow and red floral piece that included pumpkins, as well as leaves above her fireplace. “Yay! A Brit does Thanksgiving,” the Swansea native joked, referencing her Welsh background.

This years’ dinner was particularly special as both kids were returning home from college: Dylan has been studying at Brown University since 2018, while Carys just started her first semester at university in September. “A little DIY in anticipation of Thanksgiving, love this up coming holiday, my kids are home from college and I can’t wait!!!” Catherine also said in her second caption.