Former Celebrity Big Brother star Natalie Nunn claims she DID sleep with married Dan Osborne in her London hotel room following a boozy night out in 2018. 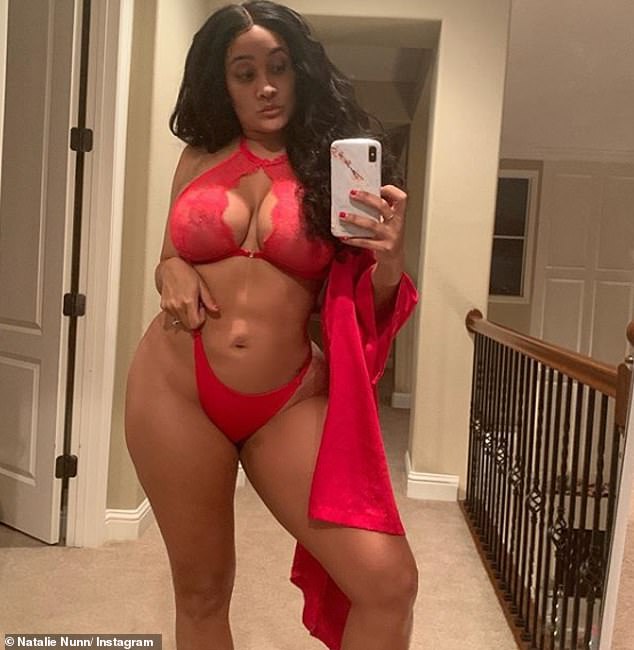 Speaking to The Sun, Natalie claims he has since begged her to remain silent about the fling after Chloe made the allegations while Jacqueline was in Australia for the latest series of I’m A Celebrity… Get Me Out Of Here!.

She said: ‘I had sex with Dan in my hotel room. Chloe’s story was true. I was drunk and it was a huge mistake but it happened. As soon as Chloe’s story broke… Dan began messaging me. He was saying, “deny it, deny it, deny it,” but I told him I couldn’t lie. I chose to say nothing until now. I want to speak the truth.’

According to Natalie, they made their way back to her hotel suite following an alcohol-fuelled dinner to celebrate the conclusion of Celebrity Big Brother, won that year by soap star Ryan Thomas. 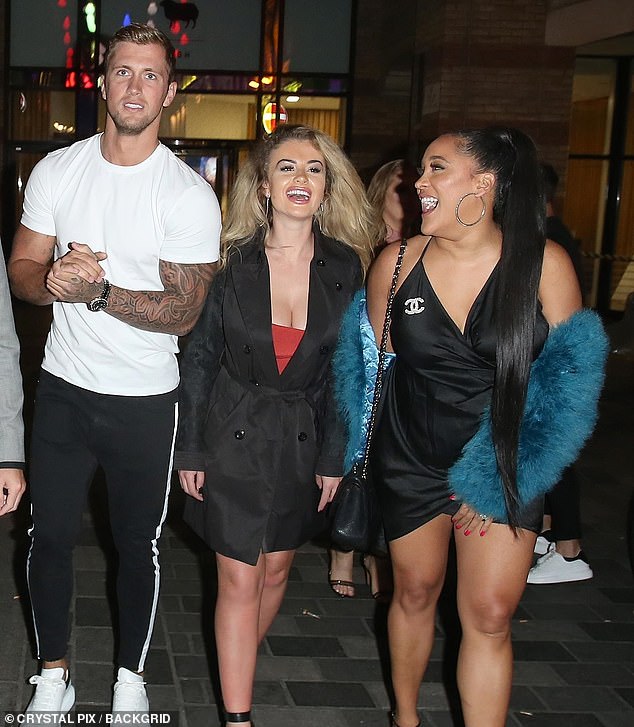 The Californian beauty claims that she and Chloe were joined in the hotel suite by two men, one of whom was Dan, who allegedly had sex with Natalie and performed a sex act on Chloe.

Natalie said of Dan: He’s been caught up in so many scandals now. And there he is trying to wriggle his way out and lie about not having sex with me. But he did. I made a mistake and I am owning it because I’ve been called a home-wrecker.

‘Chloe has been called a liar. I am not a home-wrecker, I made a mistake and I am truly sorry. Chloe is not a liar, what she said is true. Dan is the liar. And he is wrecking his own home.’ 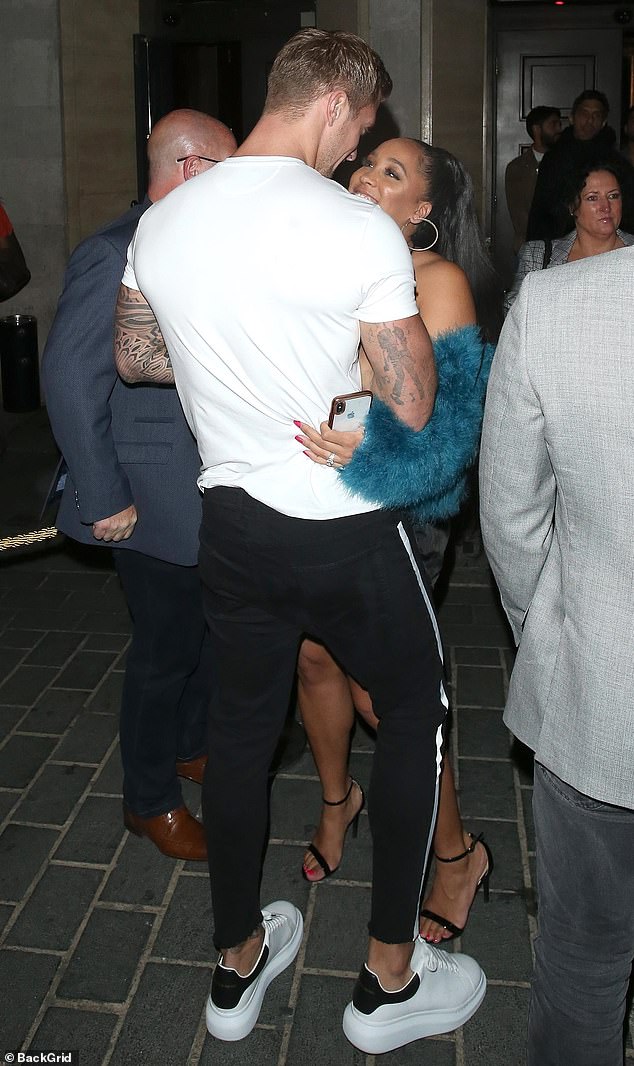 Allegations: Natalie claims that she and Chloe were joined in the hotel suite by two men, one of whom was Dan, who allegedly had sex with Natalie and performed a sex act on Chloe

When contacted by MailOnline, a representative for Jacqueline shot down further claims in the interview that the actress pulled out of meeting with Natalie.

MailOnline has contacted representatives for Dan Osborne for comment.

Natalie, who flew from the US to London with her husband last week in light of the allegations, appeared to hit out at the couple in a Twitter rant on Tuesday.

An enraged Natalie penned: ‘I have really tired hard to keep all this not public but dont try and keep it going through the media…

‘I asked for a sit down I asked for a private couples face to face talk and even came there to the UK! Now its what am I doing in London and now that I’m home its lets talk.’ [sic] 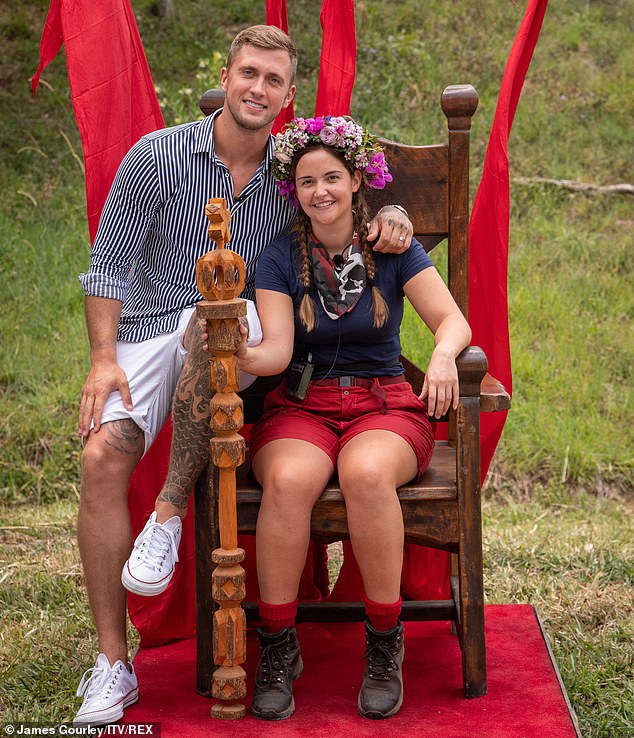 Public support: Dan was recently seen publicly supporting his wife Jacqueline Jossa during her subsequently victorious stint on I’m A Celebrity… Get Me Out Of Here! 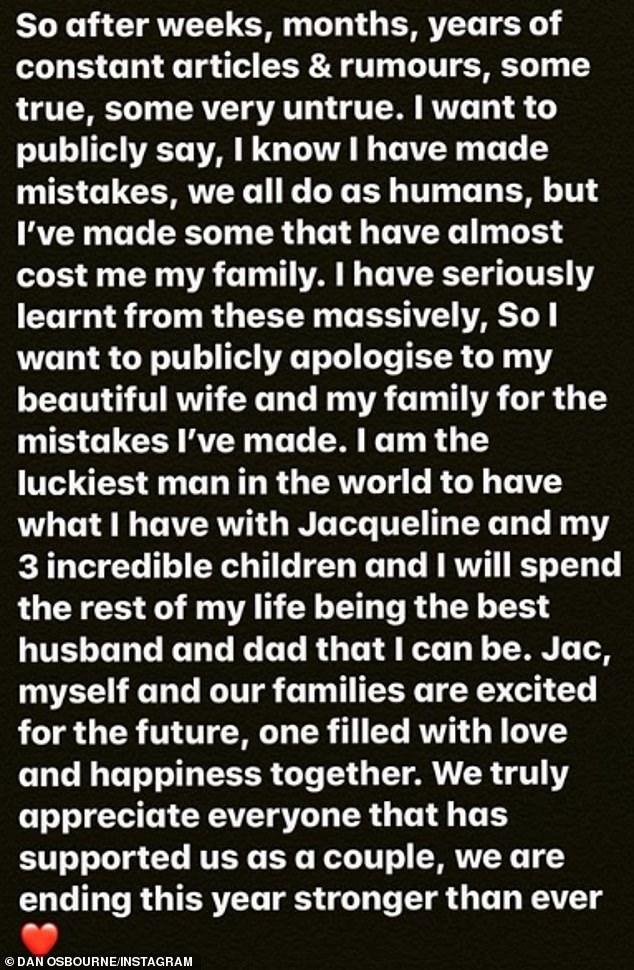 Mistakes: Last Monday, Dan apologised to his wife and her family, following speculation he cheated on her, admitting he had made mistakes in the past

In another tweet she claimed her husband Jacob had joined her in London for the meeting despite ‘the state we were in’.

She wrote: ‘This was suppose to be grown adults… Two people with beautiful families having a sit down and talking!

‘Buttttttttt again I did my part came as I said I would a woman of my word and even go my husband to do the same in the state that we were in!’ [sic]

Last Monday, Dan apologised to his wife and her family, following speculation he cheated on her.

Former reality star Dan took to Instagram to admit he has ‘made mistakes that almost cost me my family’ but that he and Jacqueline are ‘stronger than ever’. 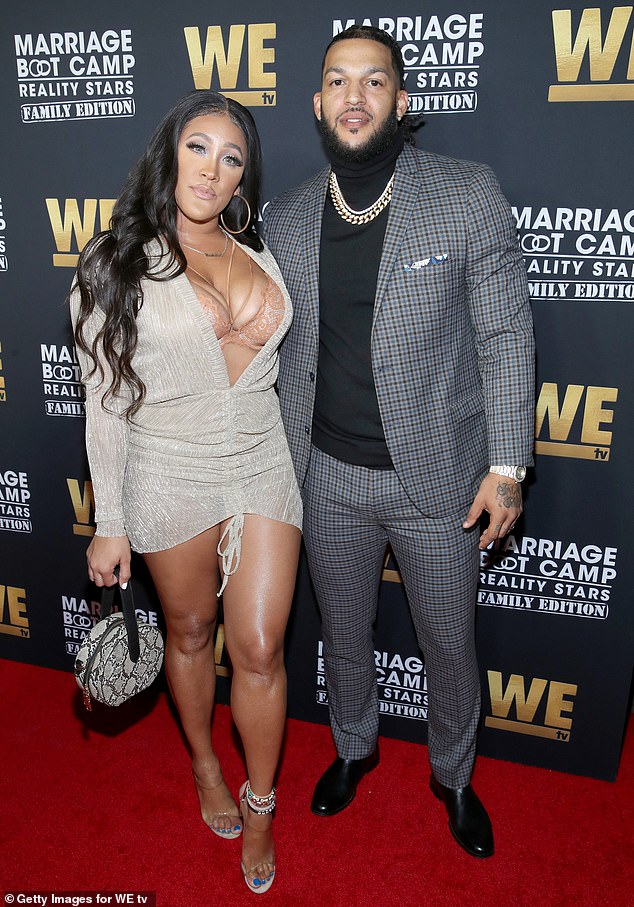 Fuming: In a lengthy Twitter rant, an enraged Nunn penned that she had ‘done her part’ by flying to the UK, but was not able to sit down and talk with Jacqueline

The statement was posted a week after his wife Jacqueline was crowned queen of the jungle on I’m A Celebrity.

Dan, who has also denied claims he cheated on Jacqueline with Gabby Allen, wrote: ‘So after weeks, months and years of constant articles & rumours, some true, some very untrue I want to publicly say I know I have made mistakes.

‘We all do as humans, but I’ve made some that have almost cost me my family. I have seriously learned from these massively, so I want to publicly apologise to my beautiful wife and my family for the mistakes I’ve made.

‘I am the luckiest man in the world to have what I have with Jacqueline and my three incredible children and I will spend the rest of my life being the best husband and dad that I can be.

‘Jac, myself and our families are excited for the future, one filled with love and happiness together. We truly appreciate everyone that has supported us as a couple, we are ending this year stronger than ever.’ 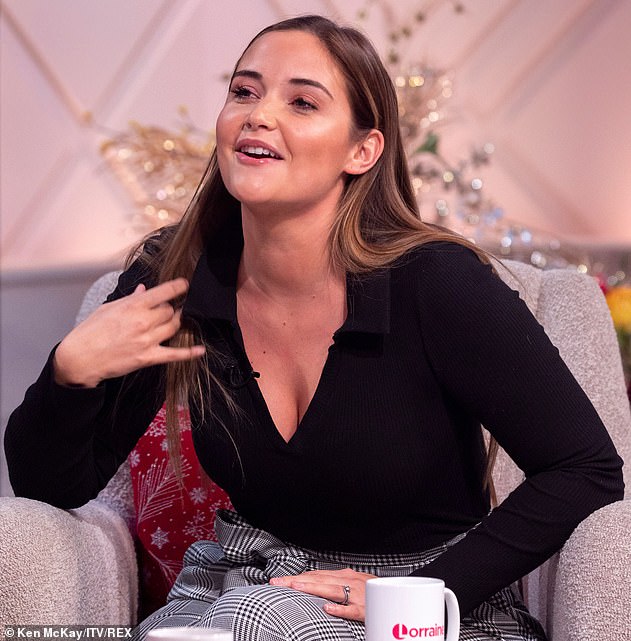 Restart: Jacqueline addressed how things are with Dan during last Monday’s edition of Lorraine, saying her husband has ‘done wrong’ but that she wants to ‘restart their relationship’

The post was uploaded just hours after Jacqueline addressed how things are with Dan during last Monday’s edition of Lorraine, saying her husband has ‘done wrong’ but that she wants to ‘restart their relationship’.

Not holding back, she said: ‘The thing is, it’s really funny because we’ve been going through it for two years – this isn’t new for me.

‘It got brought up again because of Myles but at the same time, I was glad it made me think about it, I didn’t have a choice but to think about it… but it helped me.

‘I want to hit the restart button, it’s been two years of me giving him hell, he knows he’s done wrong, there’s lots of stuff that’s not true that I can’t talk about for legal reasons, but we’re OK.’

Jacqueline and Dan married in July 2017 and have two daughters together – Ella, four and Mia, 17 months. Dan is also the father of six-year-old son Teddy from a previous relationship. 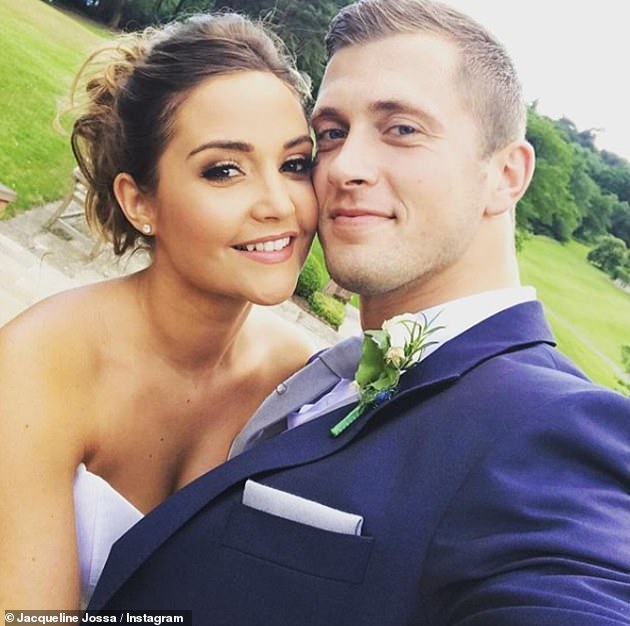 Love: Jacqueline and Dan married in July 2017, and it has been claimed that he has now changed his number to stop other women contacting him