Facebook CEO Mark Zuckerberg on Monday announced several new audio features coming to the social network — including one in particular that looks remarkably similar to Clubhouse, the popular audio-driven app.

That new feature, dubbed Live Audio Rooms, will allow users to host rooms with other users that are focused on particular topics, just like Clubhouse. The new feature will first rollout in Facebook groups, the company said in a blog post, allowing users who have already bonded over topics like cooking or sports to jump into rooms and connect.

“You already have these communities that are organized around interests, and allowing people to come together and have rooms where they can talk, I think it’ll be a very useful thing,” Zuckerberg said during a conversation with tech reporter Casey Newton on Monday morning.

Live Audio Rooms will then rollout to all Messenger users this summer, Facebook said in a blog post. 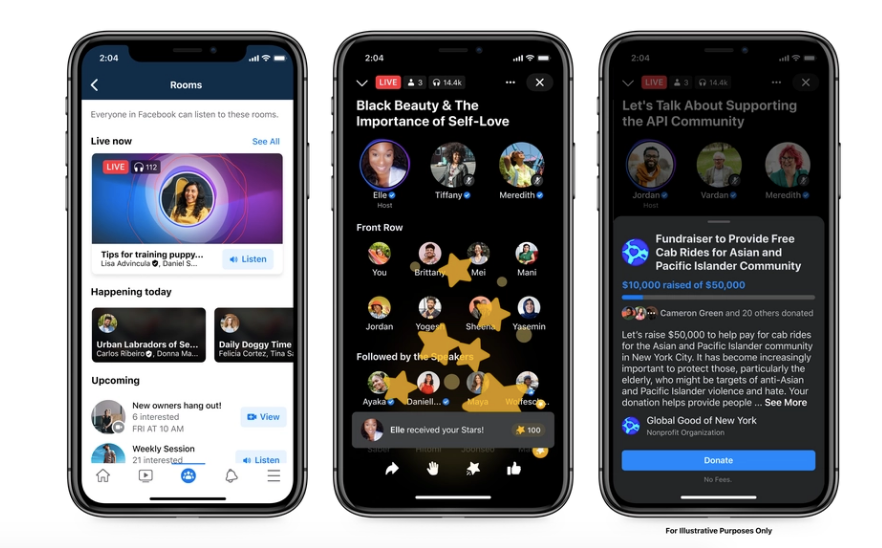 The feature, like Clubhouse, will include a room topic at the top of the screen and highlight both moderators and users listening to the conversation; the feature will only show a user’s profile picture, so that users can have a discussion without “the added pressure of being on camera,” as Facebook said. Users will also be able to charge other users to listen in on their Live Audio Rooms.

If this sounds like a familiar script, that’s because Facebook has copied other popular apps in the past, including lifting Snapchat’s “Stories” feature and adding it to Instagram, Facebook and WhatsApp. Instagram, which Facebook bought in 2012, also unveiled Reels, a feature allowing users to add music to 15-second video clips, similar to TikTok, last summer.

The new features were announced just a day after Clubhouse raised a new round of funding at a valuation of $4 billion. But beyond Facebook, other competitors — like Twitter, with its new Spaces feature — have already started rolling out their own Clubhouse clones in recent months. (TheWrap reported on Monday Clubhouse’s app downloads dropped 72% in March compared to February. You can read the full story by clicking here.)

Facebook also made a few other noteworthy audio-focused announcements on Monday, including the ability for users to listen and discover podcasts directly through Facebook; podcasts will come to Facebook “within the next few months,” the company said. Users will be able to scroll Facebook while also listening to podcasts they find on the platform.

Facebook is also working on an integration with Spotify, Zuckerberg said during his conversation with Newton, that will help musicians share their music on the platform. The project is called “Project Boombox” within Facebook, Zuckerberg said, but few other details are available right now.