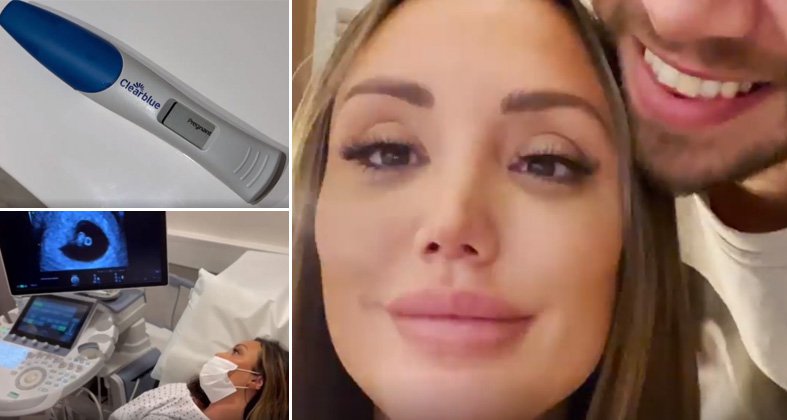 Charlotte Crosby is pregnant with her first child, with boyfriend Jake Ankers.

The Geordie Shore star, 31, confirmed the happy news on Instagram, sharing a glimpse at her positive pregnancy test.

Alongside a heartwarming video, in which she could be seen informing her family of their baby news, she wrote: ‘A moment I wasn’t sure would ever be mine 🥺🥺🥺 is here.

’It’s mine (and Jakes) and i couldn’t be happier to be sharing it with you all……Im having a baby [sic].’

The video was filled with footage from the couple’s first scan, in which the mum-to-be could be heard exclaiming: ‘Awww it has a tiny little heartbeat’.

Charlotte appeared to tell her emotional mother of the news through a message on a fortune cookie, with tears all around.

Married At First Sight UK star Nikita Jasmine penned: ‘Over the moon for you Charlotte! Congratulations.’

A follower said: ‘I am so so happy for you. Congratulations.’

‘Charlotte I am over the moon for you,’ another added. ‘You’re going to be the best Mam!!!!’

Charlotte and Jake met through mutual friends and started dating at the end of last year, before making their romance Instagram official in January.

Spilling the beans on their romance, the Celebrity Big Brother winner revealed just this month that it felt they have been together for much longer.

During a Q&A session, she was asked how long they had been dating, replying: ‘Seven months. It feels like a year the amount of stuff we’ve already experienced and been through together trust.

‘Actually I think it’s technically only six-and-a-half but I like to round up.’

Charlotte came to fame on the first series of Geordie Shore, in 2011, and has been a staple of our screens ever since.

In the first few episodes, she became close to co-star Gaz Beadle, with the pair embarking on an on-off romance over the years.

They went their separate ways in 2016, after she suffered an ectopic pregnancy at the age of 25, which led to her undergoing surgery to remove her fallopian tube.

An ectopic pregnancy occurs when a fertilised egg implants outside the womb, most often in the fallopian tube – and is fairly common but can be life-threatening.

It is not possible to move an ectopic pregnancy into the womb to develop normally and, as the pregnancy grows, it can damage the fallopian tube or cause it to burst.

The chances of having a successful pregnancy after an ectopic pregnancy are good.

Speaking to Metro.co.uk in a previous interview, she explained that she was forced to confront her fertility when she hadn’t really thought about it before.

‘I’d never really thought seriously about having children and starting a family and getting pregnant, but I did after the operation,’ she said.

‘I was all of a sudden so scared that it would be harder for me, would it even happen for me. But the doctor did reassure me that I would be able to have children.