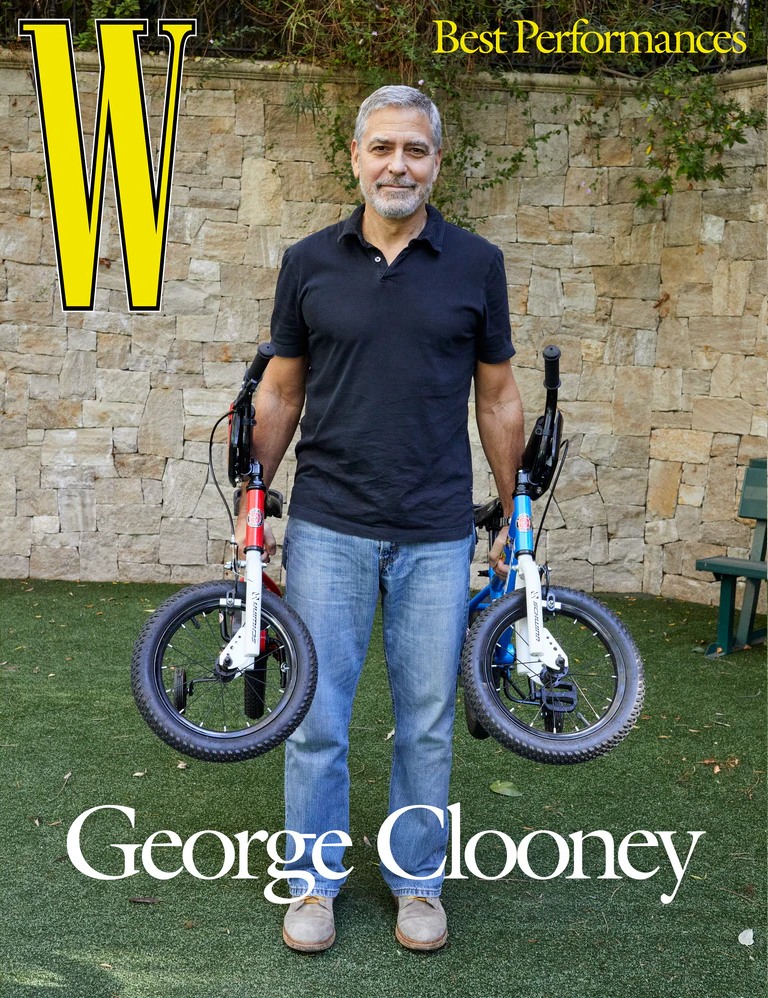 George Clooney is one of W Magazine’s March covers, all for their annual Best Performances issue. George had a new movie out recently called The Midnight Sky – he starred in it and directed it. He’s been giving a ton of interviews to support it, and honestly, this might be my favorite version of George? He’s almost 60, he’s got a bad back, he survived a terrible motorcycle crash, he’s got twins and he’s putting all of his years of self-sufficiency to good use during the pandemic. He just seems pretty chill these days. You can read read the full W Magazine piece here. Some highlights:

Deciding to take the role in The Midnight Sky: “I haven’t been acting very much lately. But this was a part that, the minute I read it, I felt like I was probably the right guy to play it. When we got hit with that first blast of 70 mph, 40 degrees below zero weather [in Iceland], I questioned everything I’ve ever done in my life. There was a moment when I thought, I volunteered to do this?! But nobody said I’m smart. I loved that there was a dreamlike quality to the film. You can’t tell what’s real and what’s not. He might be losing his mind. Or he might be sane. Originally, the narrative was about regret and seeking redemption. But as the pandemic took over, the film became about our inability to be home and hug the people we love.

Watching The Ides of March for the first time in years: “When we did The Ides of March, I knew that we were going to talk about how we elect our officials. But I also knew that if we just did that, then it would be preachy. So that’s why I made him [Governor Mike Morris] the bad guy along the way… He wants to get elected, but he’s also having sex with an 18-year-old intern. It’s funny, Amal and I actually saw the movie recently. We were just flipping through the channels, and it was on. We watched the last half of it. And I tell you, the first thing that comes to your mind is, I really miss Philip Seymour Hoffman. He was such a powerhouse and so much fun to work with. I miss him.

What originally looked like a disaster but turned out to be a great thing: “Batman & Robin. It’s a terrible movie, I’m terrible in it. I get it and I always make fun of it. But the truth was, the next film I did was Out of Sight, which is a great film. Up until then, I had just been an actor getting jobs. When somebody says, “You want to play Batman?” you’re like, “Yeah, man, I’ll play Batman!” So after that, I realized I was going to be held responsible for the movies that got made, and what the film was, not just my performance. I thought, I’ve got to focus on screenplays. The next three films I did were Out of Sight, Three Kings, and O Brother, Where Art Thou? It really taught me a quick lesson in what to look for and how to look at your career.

Pandemic hobbies: “I’ll tell you what I’ve taken on as a hobby: two or three loads of laundry a day, dishes all fucking day, because these kids are all slobs. Apparently, you have to wash your children every once in a while. I cut [my son’s] hair, and I cut my own hair too, but I’ve always cut my own hair. My hair is like straw. I haven’t cut my daughter’s hair. I’d get in trouble if I did. If I screw up my son’s hair, he’ll grow out of it. But my wife would kill me if I touched my daughter’s hair.

The best piece of advice he’s ever received: “My aunt Rosemary [Clooney, the actor and jazz singer] told me, “Never mix grain and grape.” No wine and tequila. Or vodka and champagne. I was 7. We learned early in Kentucky.”

I wish I knew “never mix grain and grape” when I was in college, that would have saved me a lot of puking and hangovers. The one lesson I did get during that time was never drink liquor after beer, but liquor before beer is fine (there’s a rhyme about it too). Add another one to the booze lessons though – no grain and grape mixing. Anyway, what else is there to say? I miss Phillip Seymour Hoffman all the time and I still can’t believe he’s gone. I also think Out of Sight is probably George’s best film? It’s the Clooney film which holds up to a ridiculous degree, and a huge chunk of it is George and Jennifer Lopez’s amazing chemistry. Sigh.