Halsey is reminding everyone that she’s a fighter. The mama-to-be announced on Wednesday, January 27 that she’s expecting her first child with boyfriend, Alev Aydin. She posted photos to Instagram with the caption “surprise! 🍼🌈👼🏻” News of her pregnancy is especially exciting because she suffers from endometriosis, a disorder in which tissue similar to the tissue that normally lines the inside of your uterus grows outside your uterus. Halsey’s been open about her condition and recently shared photos of her scars from past surgeries.

“the scars that got me this angel” she wrote on an Instagram story with the hashtag “#endowarrior.” Halsey spoke about her endometriosis diagnosis in 2017, after undergoing surgeries.

“Today I braved multiple terrifying surgeries,” she wrote in a now-deleted Instagram post. “The most important of which being the surgery that would hopefully treat my endometriosis. For those of you who have followed this battle of mine or who may suffer with it yourself, you know the extremes to which it can be mentally exhausting and physically painful.”

She added, “If you suffer from chronic pain or a debilitating disease please know that I have found time to live a crazy, wild, rewarding life AND balance my treatment and I hope so much in my heart that you can too.”

She also shared photos from an ultrasound of her baby with a little emoji of baby feet. 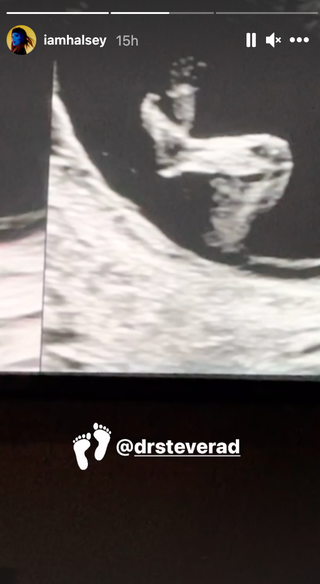 “For a long time, I didn’t think that having a family was something I was going to be able to do, and it’s very, very important to me,” Halsey revealed in a 2019 Rolling Stone interview. “Then one day my OB-GYN tells me it’s looking like I maybe can, and I was so moved. It felt like this ascension into a different kind of womanhood.”

You love all the nitty-gritty deets on Halsey. So do we. Let’s overanalyze them together.