Hailey Bieber is one of the models of the moment, who has achieved even greater fame since her marriage to singer Justin Bieber. Hailey Bieber is a member of the prestigious Baldwin family, and as the daughter of actor Stephen Baldwin, she has been surrounded by celebrities, privilege, and wealth.

Bieber travels all over the world for modeling shoots and has been to some truly exotic places. However, Bieber has no problem staying connected to friends and family and likes to show her devotion to her favorite people through a multitude of tattoos.

How did Hailey Bieber become famous?

Hailey Bieber was born Hailey Baldwin in 1996, in Tucson, Arizona. Raised alongside her sister, Alaia, she started modeling when she was still very young.

Still, her initial career preference was to be a ballerina, and Bieber religiously studied ballet until she suffered a foot injury and was unable to complete the challenging routines. Bieber returned to the world of modeling, and in short order, was walking the runway for brands like Vogue, Ralph Lauren, and UGG.

Bieber has worked as an actress and TV host in addition to her modeling work and has appeared in several music videos, including Cody Simpson’s “On My Mind” video. With all of her professional achievements, Bieber has probably received the greatest amount of press for her relationship with Justin Bieber.

The two started dating in 2015, briefly split in 2016, and then reconciled in early 2018, tying the knot later that year. They have been together ever since and recently threw a grand second wedding ceremony for their close friends and family. 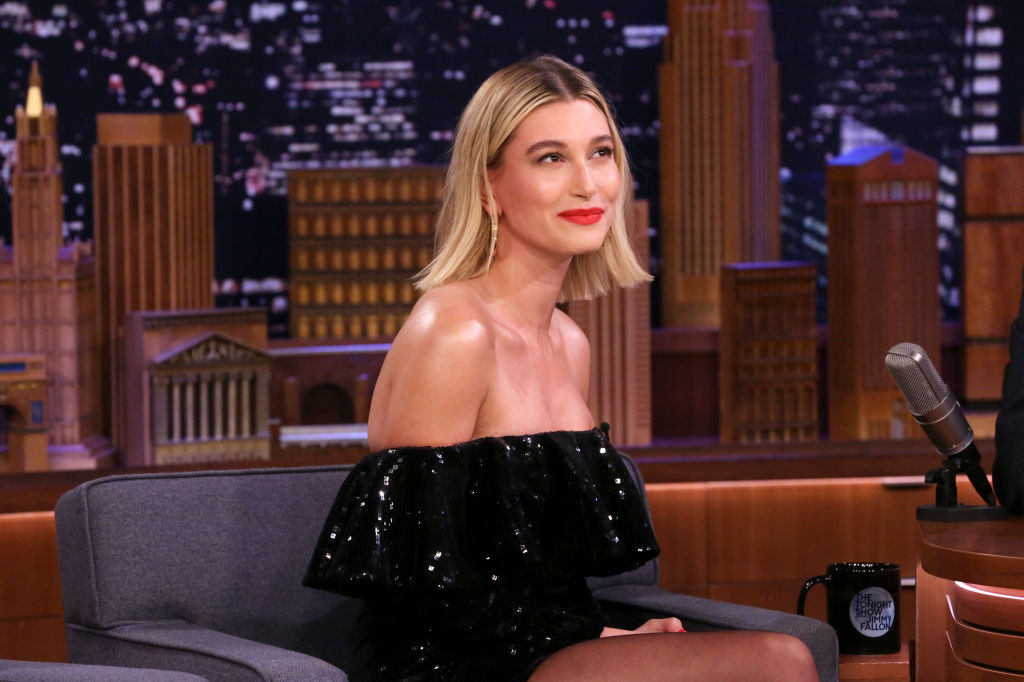 Hailey Bieber loves tattoos, there’s no doubt about it. She has around twenty tattoos in total, most of them very small, easily hidden when doing modeling shoots.

In particular, she likes finger tattoos, and has several on both her left and right hands. A few of her tattoos include roman numerals on her wrist, the letter “g” behind her ear, which she got as a tribute to her friend Georgia Veach, and the word “gente,” which means “people” inscribed on her hip.

Bieber also has a black star tattoo on the inside of her pointer finger, the word “seek” written on the back of her neck, and the word “unseen” tattooed on the curve of her spine. Bieber is known to be religious and has several Bible-inspired tattoos, including a tiny cross tattoo on her neck and several tattoos that reference Bible verses.

Along with Bible verses and religious-inspired imagery, Bieber has a number of tattoos that she got specifically to match with members of her friend group.

She has a broken heart tattoo on her finger, done in red ink – that tattoo was done to match her best friend, Kendall Jenner, who has the same tattoo, but in white ink.

Bieber also has a matching tattoo with her cousin, fellow model Ireland Baldwin (Alec Baldwin’s daughter). Both cousins have the word “Baldwin” inscribed on their fingers in a lower-case font, a symbol of how proud they are of their shared family heritage.

Bieber’s tattoo artist of choice is celebrity tattoo artist JonBoy. He specializes in tiny tattoos and has worked on celebrities like Justin Bieber, Kendall Jenner, and Travis Scott. Hailey Bieber is one of his most devoted clients — and judging by the number of tattoos she already has — more than 19! —she will likely be visiting him a lot more in the future.