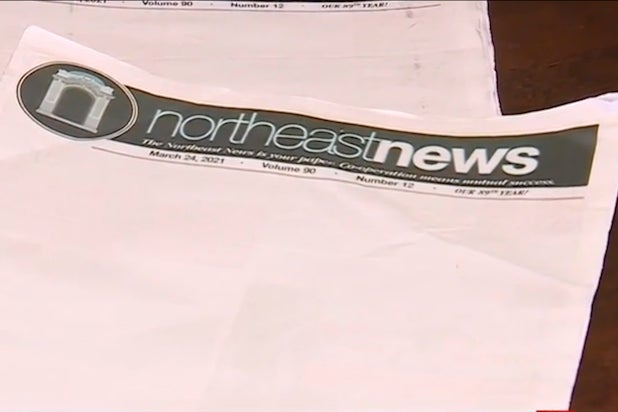 Kansas City’s Northeast News published a blank front page for its Wednesday issue as a stark warning to readers about the state of local news.

“That’s the message we wanted to send: What happens if we’re gone?” publisher and co-owner Michael Bushnell told The Washington Post. “If we print a blank front page with no news, people are going to see what it’s like if we’re gone.”

In a standalone post, the paper’s managing editor, Abby Hoover, said the Northeast News only had “a 60 day lifespan if something doesn’t change.”

“If you find yourself frustrated that you aren’t reading news of the housing summit that took place over the weekend, the cleanups your neighbors organized in the parks, information about COVID-19 vaccination opportunities, or the variety of things we usually cover, take a moment to think about what could very soon be our community’s reality,” Hoover wrote.

The tactic appeared to work: Within a day, a fundraiser for the paper received $800 in donations and several local businesses reached out to see if they could assist the 89-year-old weekly, according to Bushnell.

But whether there will be enough financial support to sustain the Northeast News into the future remains to be seen. Since 2004, the U.S. has lost 2,100 — or one quarter — of its local newspapers, according to a University of North Carolina report on news deserts. The report also found that of the 3,143 counties in the U.S., more than 200 do not have a newspaper or alternative source for credible information on important issues, while half of the counties only have one newspaper.