“I planned it. Here in ‘85,” HBO’s Watchmen character Adrian Veidt (Jeremy Irons) explains over a video prompter on a message recorded 30 years in the past, now multiplied by a dozen screens, Matrix-style, as a horrified Looking Glass (Tim Blake Nelson) watches. “The end is nigh,” he continues, “nuclear holocaust between the U.S. and Russia is imminent. . . . The only way to stave off man’s extinction is with a weapon more powerful than any atomic device. That weapon is fear.”

Veidt is speaking about the event that concluded the comic and opens Watchmen’s fifth episode: the destruction of Manhattan by means of a giant synthetic squid.

Readers of the Watchmen graphic novel will remember exactly how this plan was orchestrated: Veidt had kidnapped writers, artists, and creators, marooned them on an island, and set them to work building the squid–which he would then combine with vague teleportation technology and drop on Manhattan. In the graphic novel, the plan succeeds, and it appears both the U.S. and Soviets initiate early-stage peace talks.

In the HBO version, Veidt has apparently also added some kind of psychic weapon as well. As he explains: “In 24 hours’ time, an extra-dimensional monster will materialize in Manhattan, unleashing a psychic blast that kills half the city’s population and traumatizes millions more.”

HBO’s Veidt goes on to explain how this plan, leading to peace (a hoax, Veidt says, to save the world) will also help Robert Redford ascend to the Oval Office. In the graphic novel, a conversation between newspaper employees reference Redford as a potential presidential candidate in 1988.

Veidt then asks newly elected Redford (whom he correctly predicted would win; his video was recorded the night before the 11/2 squid attack), to whom this message was intended, to be his partner in building a utopia. “I envision a stronger, loving world, committed to caring for the weak, reversing environmental ruin, and cultivating true equality,” he pontificates. 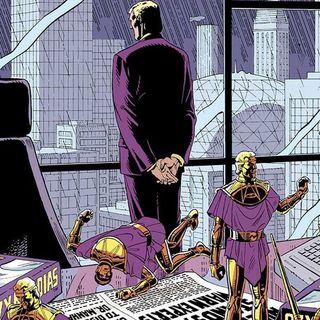 Again, none of this will surprise readers of the comics, who have likely been assuming for the last 4 weeks that Veidt is responsible both for the destruction of Manhattan as well as the squid rain. The only thing readers learn is that Veidt successfully covered up his plot, and that Rorschach’s journal, leaked to the press and insinuating that Veidt was responsible for killing the Comedian, seems to have fallen on deaf ears. Everyone was perhaps too preoccupied by Cold War peace to care.

Why HBO’s Rorschach contingency has this video message in its possession–and appears desirous to preserve the order–seems odd, considering that the Rorschach character in the graphic novel died after he threatened to expose Veidt’s plan. Perhaps these Rorschachs want to expose the plan. Perhaps they seek the anarchy Veidt killed to protect. Perhaps Senator Keane, leading the preservation effort, underestimates his masked “allies.”

We’ll just have to wait to find out.