Meghan Markle and Prince Harry showed a more casual look at their dynamic as a couple when they filmed and shared a video tribute for their friend Elton John’s farewell tour special on Disney+, Elton John Live: Farewell from Dodger. The two stood alongside each other in the clip and touched on the very deep, personal ties John has to them and their children, three-year-old son Archie and one-year-old daughter Lili.

Meghan said, “Hi Elton, we just wanted to say congratulations and that we are just so proud of you and that we were able to see you on your farewell tour also.”

Meghan then rested her head on Harry’s shoulder in a sweet, candid show of affection.

Well hello there! What a fun surprise in the @eltonofficial @DisneyPlus opening. pic.twitter.com/CxEvOdX2F5 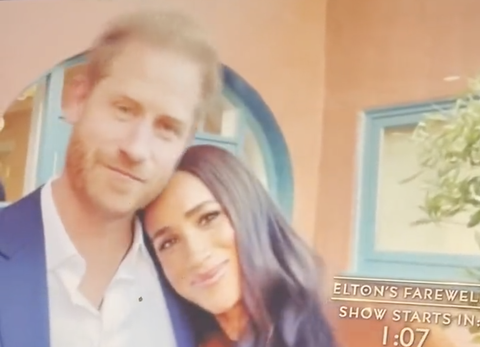 Meghan hinted before, during her interview with The Cut at the end of August, that she and Harry were eager to share more of their love story with the world, allegedly through their upcoming Netflix documentary series. The series is reported to be coming out next month although Netflix has not given any explicit confirmation of the project.

“The piece of my life I haven’t been able to share, that people haven’t been able to see, is our love story,” she told The Cut, quoting the end of her wedding speech where she discussed taking comfort in the “resounding knowing that, above all, love wins. I hope that is the sentiment that people feel when they see any of the content or the projects that we are working on.”