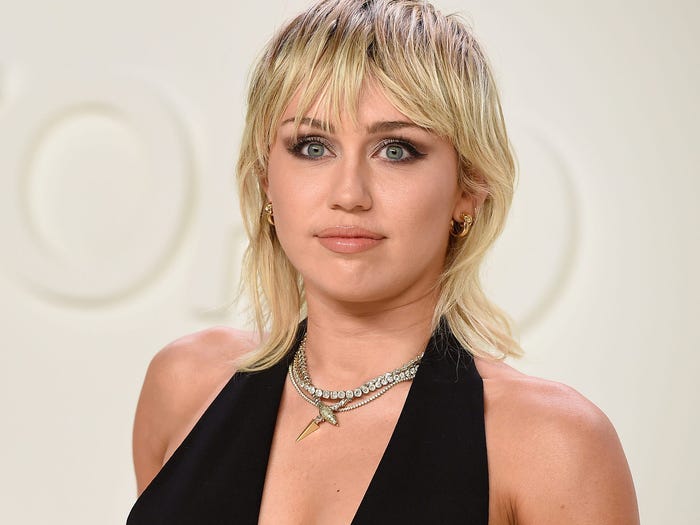 Miley Cyrus says that the public judges her wellbeing based on her hairstyle.

"My hair is some sort of reflection for my sanity, my sexuality, my sobriety," the 28-year-old star said in a new interview for SiriusXM's "The Howard Stern Show."

"The public really makes my hair, I guess, the kind of monitor of how I'm doing," she continued.

"It's really not their fault that they associate my hair and my identity and my wellbeing so closely, because basically, we drilled that into their brains for 8 years of a series," she added, referring to her "Hannah Montana" role on Disney Channel.

Cyrus rose to fame when she landed a starring role as Miley Stewart, an ordinary teen with a secret pop star identity, on "Hannah Montana." The show lasted for four seasons between 2006 and 2011.

Throughout the series' four-season run and its accompanying movie, Cyrus alternated between her long, wavy brunette hair and a blonde wig with bangs for her Hannah role.

In January 2008, she debuted darker hair and heavier eyeliner at the premiere for "Hannah Montana & Miley Cyrus: Best of Both Worlds Concert." The following year, Cyrus faced backlash after her 2009 Teen Choice Awards performance in which she, then 16 years old, got on stage with a pole to perform her hit song "Party in the U.S.A."

Her 2010 album "Can't Be Tamed" marked a further departure from her clean-cut Disney Channel image. She went on to experiment with more hairstyles over the years, including an ombre look, beachy waves, and bobs.

Cyrus would go on to be perceived as rebellious in the years that followed, as she famously swung on a wrecking ball for her "Wrecking Ball" music video.

In 2012, she debuted a bleached fauxhawk, followed by a pixie cut. She also rocked shorter, bleached hairstyles afterward.

She rocked blonde hair and bangs, reminiscent of her Hannah Montana look, in 2019 and later got a mullet. She currently dons an edgy bangs look that coincides with her new rock-inspired album "Plastic Hearts."