Stewart rose to fame for her blunt sense of humor and a lavish lifestyle on E!’s “RKOBH” in 2014. Auditioning for a separate reality project with best friend Dorothy Wang, Stewart was instead recruited to star in her own show alongside Wang about their lives, per her appearance on the In The Chair with Justin Anderson podcast. Since her “RKOBH” run ended in 2016, per IMDb, she has contributed to and hosted no less than four E! Network series: “Daily Pop,” “Nightly Pop,” “Necessary Realness,” and “What the Fashion.”

After enjoying the “happiest month I’ve ever had” in March via her Instagram, Stewart tweeted her return to “Daily Pop” on June 2, announcing, “Back to work full time tomorrow … anxiety/excitement overload.” (She even dealt with online troll drama the instant she returned.) On June 9’s Instagram Stories, however, Stewart shared that not all was as well as depicted on social media during her leave. Here’s what she had to say about her postpartum health. 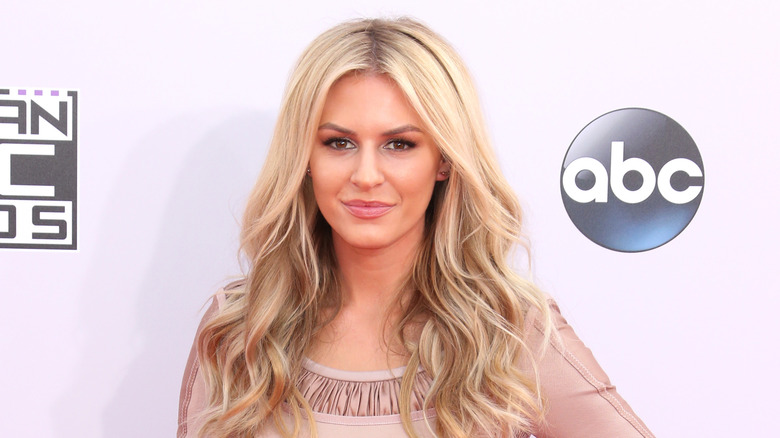 In a candid Instagram Story series on June 9 (via E!), Morgan Stewart revealed that being pregnant with daughter Row Renggli resulted in major thyroid-related issues in “another example of everything seeming wonderful on Instagram and the reality being the total opposite.” Experiencing symptoms since Row’s February birth like tense jaw muscles, a swollen tongue, dizziness, slurred speech, and temporary loss of movement in her right arm, Stewart wrote, “I was no longer speaking proper English or able to communicate efficiently… just lost in panic and uncertainty.” Diagnosed with thyrotoxicosis, her doctor informed her it could be caused by Graves Disease, a nodule on her thyroid, or sub-acute thyroiditis. (Per E!, “Graves’ disease has since been ruled out.”)

In Googling the three possibilities, Stewart noted her relief at finding her “nervousness, irritability and intense anxiety” were also typical of such illnesses. “I felt much better knowing this wasn’t just in my head,” the “Daily Pop” host wrote, sharing that she has been self-administering “half a .25 Xanax to function through out the day.”

“Ive had to rest and manage my stress levels/try to get back to normal,” Stewart stated.

Her hope is that her transparency encourages other new moms to see a doctor if in a similar situation. “We are so programmed to power through every F**KING thing… If you’re feeling off please don’t wait as long as I did to get things checked out,” Stewart advised.