The Transportation Secretary said that attacks on him and bills like ‘Don’t Say Gay’ are made for ‘political reasons,’ and because they don’t have plans for other political issues.

Secretary of Transportation Pete Buttigieg brushed off attacks from Republicans who make light of his sexuality or he and his husband Chasten being fathers, during a Friday April 8 appearance on The View. Buttigieg, 40, explained that attacks on him personally or dangerous pieces of legislation like Florida’s “Don’t Say Gay” bill are often politically motivated to hide the fact that they don’t have further plans to deal with issues that affect Americans.

When asked if he had any messages for kids who might be struggling due to the “Don’t Say Gay” bill, Buttigieg hit back at Republicans for making an already difficult time, even more difficult. “You’re not alone. It is hard to be especially a middle schooler. Even if you’re not LGBTQ+ or anything! It’s hard, and you throw that in, and you think about what these kids are asked about. There might be bullies in your school. You don’t need bullies in the state house added to that,” he said.

At the top of the show, a clip was played of Republican Georgia Rep. Marjorie Taylor Greene, where she made a bizarre and offensive attack against the Transport Secretary. “He and his husband can stay out of our girls’ bathrooms,” she said. Earlier in the interview, View co-host Ana Navarro said that she was “sorry” about jokes that some Republicans have made at his expense, before asking about the “Don’t Say Gay” bill.

Buttigieg warned that even though certain laws and attacks are to cover for a lack of planning, these laws can cause harm. “I get the political reasons why they’re doing this. By the way, some of those political reasons is they don’t have a plan on anything else. They don’t have a plan on dealing with inflation or dealing with gas prices,” he said. “It’s easier politically, but this is going to hurt people.”

'The View': See Photos Of The Show

Buttigieg said that he’s not getting bogged down by the attacks or the questionable laws, and instead, he wanted to focus on infrastructure. “They’re doing this because they don’t have answers on the issues that people actually are asking about. So, I’m focused on just trying to deliver. They can keep trying to go out there and ban books. We’re going out there trying to build bridges. Literally,” he said. 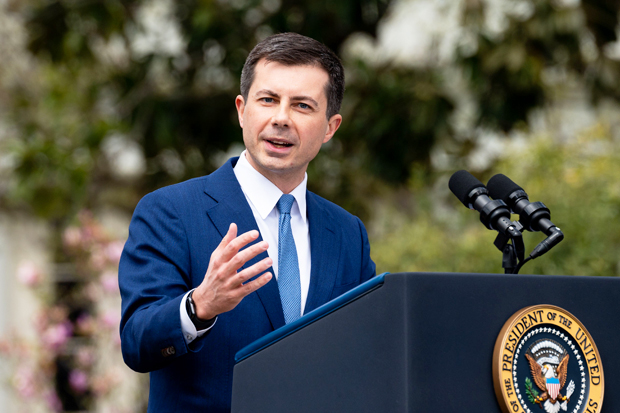 After discussing his plans, Buttigieg gave examples of how he felt the “Don’t Say Gay” bill could negatively affect classroom discussions, asking for example if teachers would be expected to rip out any page from a textbook that shows an LGBTQ+ couple. As the interview wrapped up, he showed his support for any kids who might be struggling amid the new legislation. “So the biggest thing I want these kids to know is not only are you not alone, you’ve got a lot of people that have your back, including people like me and Chasten. Including millions of people across America, and I would add, including the President of the United States,” he said.