Piers Morgan, 54, appeared in on the joke after Susanna Reid, 48, jokingly stabbed at an image of his face when she was provided with a “voodoo doll” of her co-star. A clip of her pricking a pin cushion which bore a picture of his head was shared by the official Good Morning Britain Twitter account with their 538,000 followers. “Looks like @susannareid100 is now resorting to drastic measures,” GMB quipped. “We suggest you tread carefully @piersmorgan.” They added the hashtag: “#PiersVoodooDoll”.

It wasn’t long before Piers responded to being made into a “voodoo doll” and his fellow presenter lightheartedly taking out her frustration.

“I have requested an urgent meeting with HR,” he joked, in view of his own 6.6 million Twitter followers. “This is a clear incitement to violence in there workplace from a co-worker.”

Fans joined in with the joke, with one commenting: “Yes but did it work? If not you have no case!”

“Brutal misuse of power and position there mate lol get her fired haha… joking obviously,”(sic) another added, while a third chipped in: “She just needs something to do whilst she can’t get a word in with your ranting lol.”(sic)

Piers and Susanna have presenting GMB together since he joined the ITV team in 2015.

The pair are set to go head-to-head in Soccer Aid 2019 this weekend, with the former helping manage the World XI and the latter, England’s all-star squad. 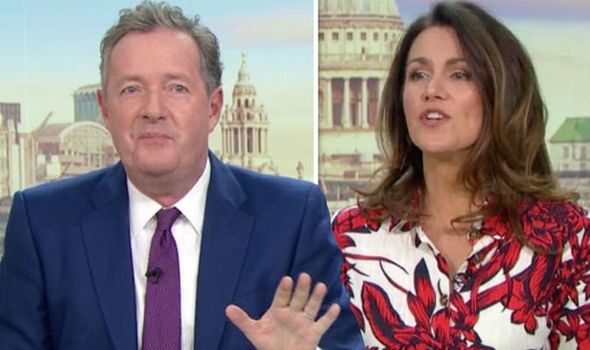 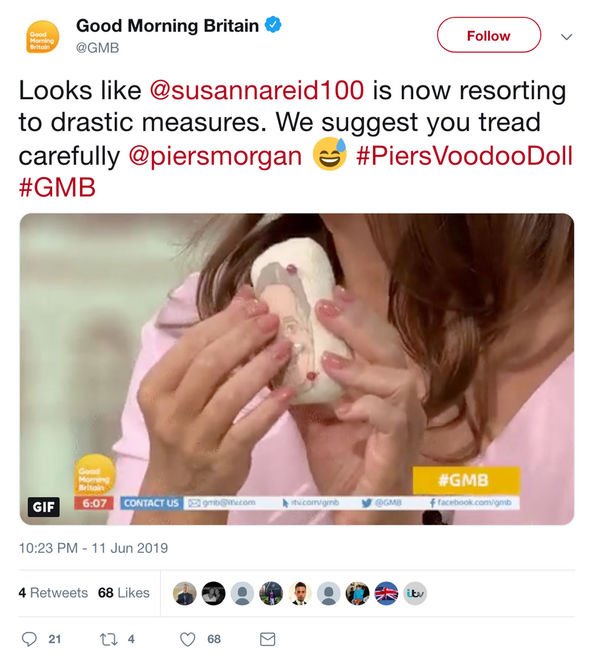 Ahead of the clash, Piers Morgan and Susanna Reid opened up about their competitiveness.

“There’s nothing friendly about it,” she said.

“It’s very real and it was much worse when we first met,” he added.

“I first met Susanna at a party,” he told Notebook Magazine. “I said, ‘The trouble with your show [GMB] is that you need a slightly older bloke giving you a hard time.’”

“He said, ‘What you need to transform your show is me,’” Susanna said, to which he replied; “Well, look at the ratings, baby, and keep grinning.”

Susanna took over on GMB in 2014 after leaving her previous role at BBC Breakfast to make the move to ITV. 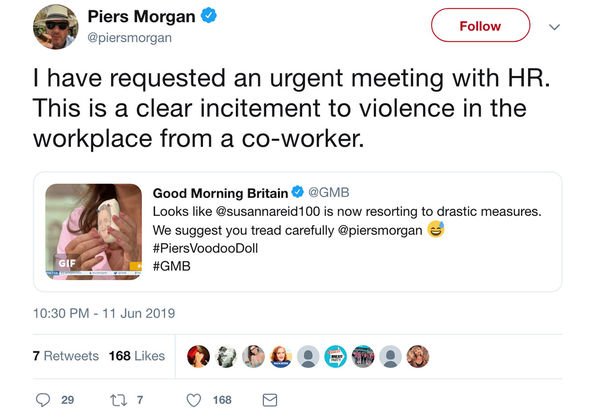 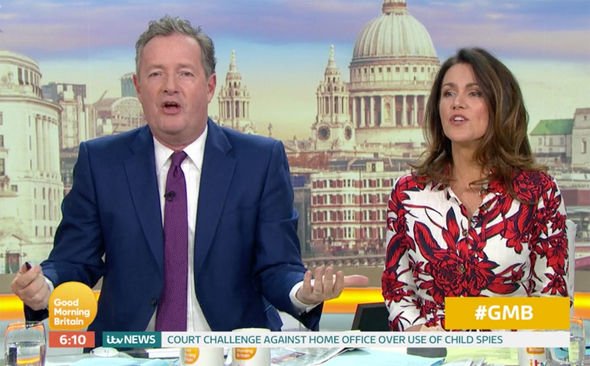 Piers joined her on the programme the following year.

On Sunday, he will partner up with Harry Redknapp, 72, to manage Soccer Aid 2019’s World XI side, starring the likes of Dider Drogba, 41, and Usain Bolt, 32.