Prince Harry had a royal family outing today at Buckingham Palace, attending a garden party hosted by the queen with his cousins, Princess Beatrice and Princess Eugenie. It was a rainy but nonetheless posh occasion; the Duke of Sussex dressed up with a three-piece suit and brought along a top hat and umbrella.

His grandmother stayed true to her colorful style with a pastel pink coat and hat (and a matching plastic pink umbrella!). Meanwhile, the Princesses of York coordinated in nude and floral dresses. 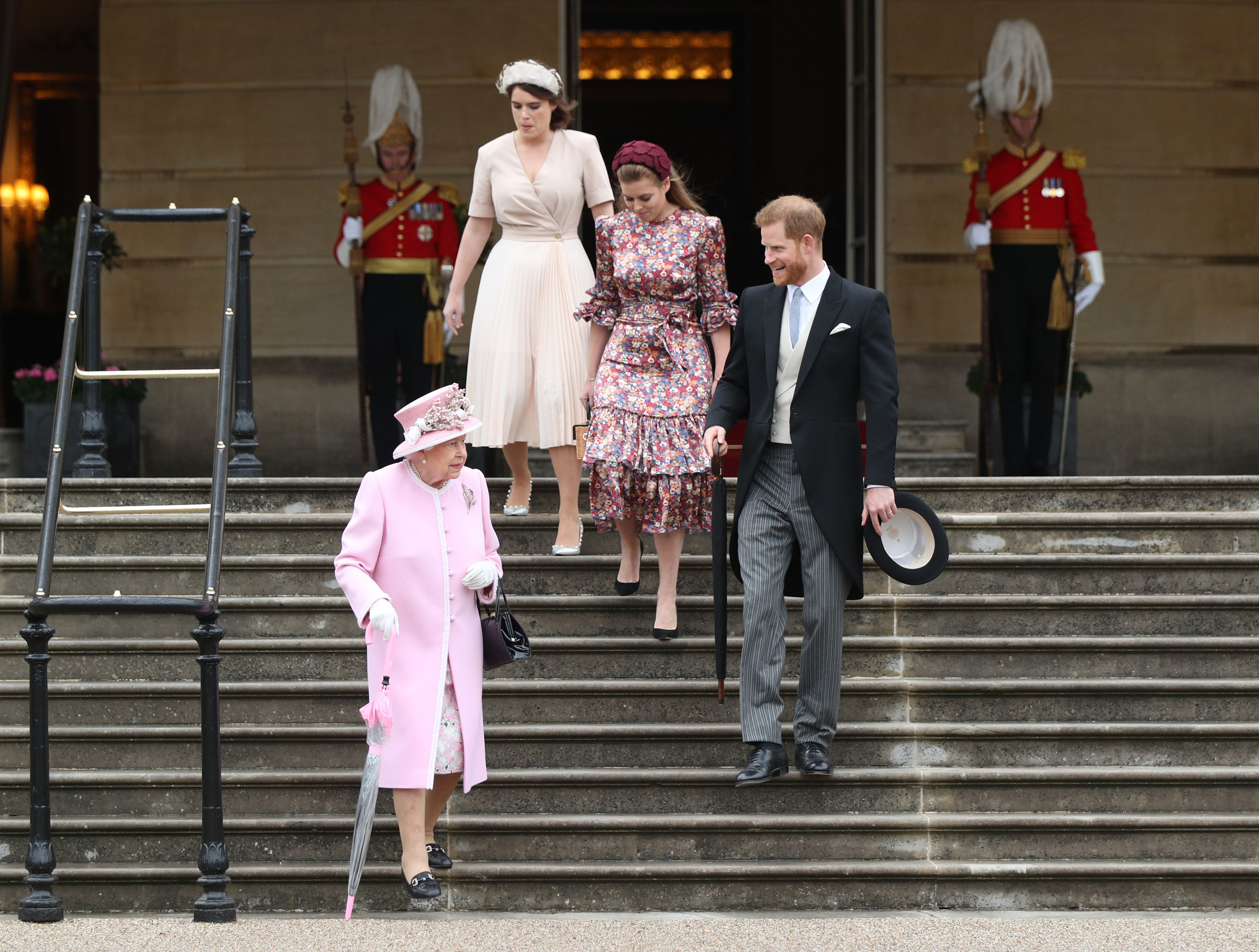 The Sussexes shared happenings from today’s gathering on their official Instagram accounts, explaining that garden parties are a royal tradition dating back to Queen Victoria’s time in the 1860s. In modern times, the sovereign hosts four garden parties a year to recognize guests “for the good work they’re doing in their communities.”

The attendees at today’s party included guests personally invited by the Duke and Duchess of Sussex, including representatives of African Parks, Invictus Games, and more.

Meghan Markle and baby Archie were unfortunately absent from the celebration, but she and Harry did attend a garden party honoring Prince Charles’s patronages last May, just days after their royal wedding.

Today The Duke of Sussex attended a Garden Party at Buckingham Palace alongside Her Majesty The Queen and other Members of The Royal Family. The Queen hosts Garden Parties as a means of recognizing guests for the good work they are doing in their communities, a tradition steeped in history and dating back to the 1860s during Queen Victoria’s reign. The Duke and Duchess of Sussex attended their first official Garden Party as a couple last May at Buckingham Palace just days after their wedding, in celebration of The Prince of Wales’ charity work, patronages and military affiliations. Today, The Duke of Sussex met with several guests including those that he and The Duchess extended a personal invitation to based on their extensive work in the community. His Royal Highness met with a representative of @africanparksnetwork (of which he is President), a mental health consultant for @weareinvictusgames and countless others who are leading by example with high impact cause driven work. The Duke also greeted several representatives of The Duchess’ patronages on her behalf, as she is on maternity leave and was unable to attend. These include members from @themayhew @thenationaltheatre and @smartworkscharity as well as The Association of Commonwealth Universities. Amongst the 8,000 people attending today were Members of the Armed Services, Ambassadors as well as those who have made a positive impact through the arts, charity work and volunteering. Thank you to volunteers, staff and all of those who dedicate their time and energy to working towards the collective good. We appreciate all that you do ?

The Duke and Duchess of Cambridge were also missing this afternoon, but they did attend a garden party with Her Majesty last week. Kate wore an all-pink look by Alexander McQueen for the sunny festivities.

Prior to stepping out for the outdoor celebration, Prince Harry and the queen met with Cricket World Cup team captains ahead of tomorrow’s big tournament.