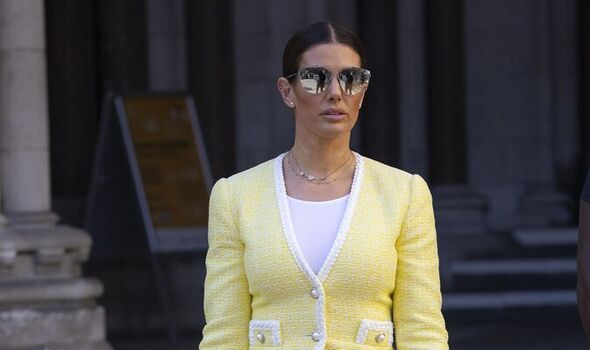 The comment came during the ‘Wagatha Christie’ trial at London’s High Court, where Vardy is suing Coleen Rooney for libel. Harpreet Robertson, a family liaison officer for the Football Association, gave evidence this afternoon about Rooney’s claim Vardy sat behind Coleen Rooney at a Euros match in 2016 to “boost her public profile”.

During the trial she has argued Vardy “actively wanted to be famous” and heard reports the fellow WAG had sat behind her during a match against Wales.

Vardy claimed during the trial she sat behind the Rooney family as they were sitting in her seats – which Mrs Robertson said in a statement is “simply untrue”.

Mrs Robertson also claimed in the statement that Vardy “grabbed her” at a 2018 World Cup match to complain about her seats.

In her witness statement, Mrs Robertson said: “It appeared that she wanted to be sat in the seats that were right in the eye line of anyone looking at, or photographing, Coleen.

“Indeed, her behaviour during the game suggested to me that her focus was little or nothing to do with the football match. I remember that Becky was constantly on her phone, often taking selfies and generally showing very little interest in the match itself.”

Giving evidence, Mrs Robertson said: “It’s not a criticism, it’s a point of fact. I barely watch a match myself because I’m concerned about any issues in the box in front of me, so I sit in the back so I can do that.”

Mrs Robertson said when she entered the stands at the start of the match, Vardy was not sitting in her allocated seats and two of her party were sitting in seats she had reserved for herself and security.

The court heard Vardy’s seats were several rows in front of Rooney and on the opposite side of the section.

She said in her witness statement: “I asked them to move but they refused and were incredibly rude and abusive to me, remarking words to the effect of ‘we can sit where we like, f*** off’.

“An altercation followed which almost reduced me to tears. I soon realised that these people were the guests of Becky

“Becky was sat in the row in front of my seats, and where two of her guests were now sitting, in the row directly behind Coleen and her family, who were sat in the seats that had always been allocated to them.

“Becky could plainly hear what was being said between me and her guests. I recall that Becky’s guests were a man who had a private plane (and his sons), and that Becky would sometimes travel on his private plane.”

She said she did not know if Vardy “deliberately” sat in the seats behind Rooney but said: “In my opinion, at the time and from the information I gathered from my colleagues there were plenty of options for seating. And she chose at that time, in my opinion, to sit in those seats.”

In her statement, Mrs Robertson said the pair again clashed at the 2018 World Cup because Vardy wasn’t happy about her seats.

She said: “At the World Cup 2018 semi-final between England and Croatia, I recall that just before kick-off Becky had once again decided she would not sit in the seats allocated to her.

“All of the category 1 seats are good viewing but I would often rotate the ‘better’ seats to keep things fair and this time it was Becky’s turn to sit further back – by just 8 rows.

“Becky decided to sit a few rows further forward and when I walked past her to my seat, she grabbed me to complain that she was not happy with the seats she had been given.”

Rooney’s brother Joe McLoughlin, who works for sports PR Triple S Group, was also called as a witness for a brief questioning by Mr Tomlinson this afternoon.

He told the court he would sometimes put posts on his sister’s public Instagram account with her permission.

But he said he was “shocked” when Rooney sent him the post about Vardy to publish.

Mr McLoughlin said: “I received the call from Coleen. I just said it was a shock to me and she said ‘I will have to tell you about it but can you just post it’. I was shocked.”