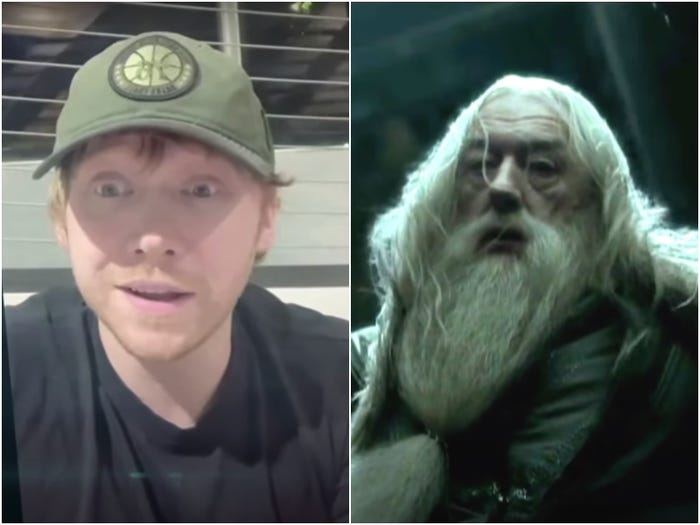 Rupert Grint said that he earned the nickname "Go Again Grint" on the set of "Harry Potter" for laughing constantly during scenes.

Grint appeared on Tom Felton's Home Party, a virtual "Potter" reunion celebrating 19 years since the "The Sorcerer's Stone" was released. He was asked if it was true if he had a problem laughing during scenes, which he confirmed.

"It's still a problem, it's something I've never been able to shake. Even making this video, I'm, like, take 20. It's quite hard to explain because it's never really anything in particular that I'm laughing at," Grint said.

Grint said that while working on "Potter," he would laugh during "the most inappropriate scenes,"

"Dumbledore's funeral was a particularly bad one," Grint said. "For some reason, I found that absolutely hilarious. And yeah, once you start laughing, it's very hard to stop. It just becomes a thing."

"I had a particularly bad reputation, they used to call me 'Go Again Grint' because I just could never do anything without doing it like 20 times."

Grint added that when he and Daniel Radcliffe shot the scene in which their characters Ron and Harry meet for the first time, in the Hogwarts Express train carriage, they couldn't stop laughing at one another.

"We literally had to shoot that separately. So whenever you watch that, we're never in the same carriage because we couldn't look at each other in the eye," Grint said, shining a new light onto the scene.

Grint continued: "It's a problem. But there's little tricks you can do to get around it. I developed a few facial expressions which hide my smile but it's something I'm working on."