It looks like Scott Disick might be fully feuding with, well, literally the entire Kardashian-Jenner family. That’s a big undertaking, even for someone with a solid 15 years of experience navigating Kardashian drama. Honestly, raise your hand if the idea of taking on the entire KarJenner fam is so terrifying, it could fuel your nightmares for a year—oh, well, look at that, it’s ALL OF THE HANDS up:

So, first things first: Why do people think Scott Disick might be feuding with the entire Kardashian family rn?

This part is simple. Scott dropped the gauntlet in the most 20 21 way possible: by unfollowing the entire fam on Instagram in one big, earth-scorching move.

A quick search through Scott’s followed accounts reveals that there isn’t a single Kardashian to be found:

FWIW, one KarJenner-adjacent human does seem to have made the cut: Kylie Jenner’s boyfriend and coparent, Travis Scott.

Okay, but what did the Kardashian family do to incur the wrath of Lord Disick?

This is where it gets a little more complicated, but the simplest place to start is with Kourtney Kardashian and Travis Barker.

Kourt and Travis have gotten very serious since they started dating at the beginning of this year and, even though Scott *officially* gave the romance his blessing during the Keeping Up With the Kardashians reunion special in June, his true feelings became crystal clear in August when Kourt’s other ex, Younes Bendjima, exposed some very salty DMs Scott sent him about Kravis.

Basically, Scott DM’ed Younes a picture of Kourtney and Travis engaging in some of their signature PDA in Italy [edit note: we covered the pic since Kravis never asked to be included in this narrative and we respect their privacy], along with the message, “Yo is this chick ok!???? Broooo like what is this. In the middle of Italy.”

Younes, having exactly NONE of it, replied, “Doesn’t matter to me as long as she’s happy. PS: I ain’t your bro.” 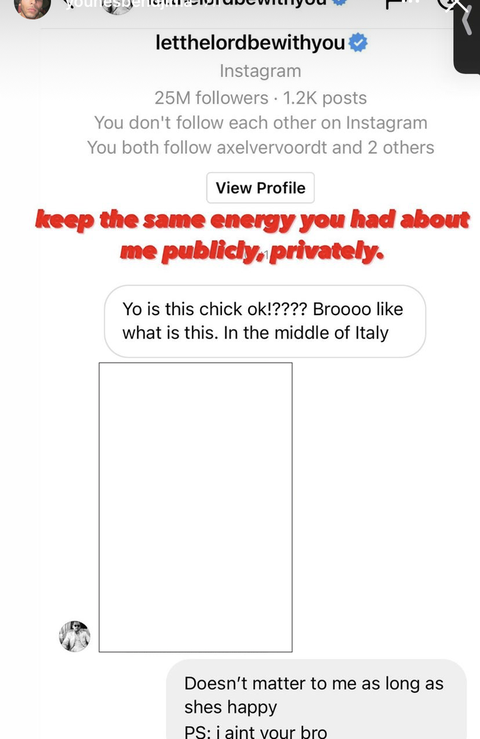 Then, the shade went public when Younes shared a screenshot of the exchange on his Instagram Story, captioned, “keep the same energy you had about me publicly, privately” in bright red font.

Needless to say, the whole situation was not a good look for Scott and, on top of the generally bad optics, it seemed to put a real strain on his relationship with Amelia Hamlin because the pair split just days later. “Amelia was the one who ended things,” an insider told Us Weekly of the breakup about a week after Scott’s DMs with Younes were leaked.

Within a week of the scandal, Amelia was posting cryptic Instagram Story messages that seemed to allude to the break up.

“Never settle for less,” she wrote in a September 7 post that fans speculated was about the breakup. “Not with your jobs, your friends, and especially not with your heart. Continue to seek what you are looking for and do not shrink yourself for the sake of other people. You deserve the best.” 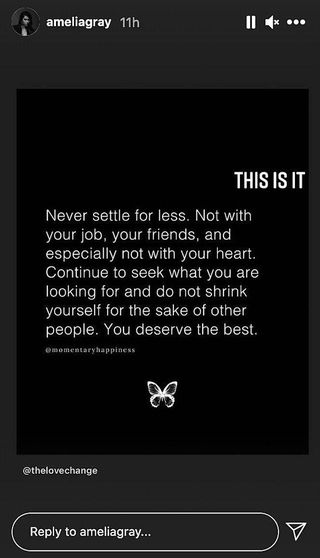 Earlier this week, Amelia shared another Instagram Story post that seemed to reference the split. “The longer you entertain what’s not for you, the longer you postpone what is,” the post read, along with “Read that again” written underneath. 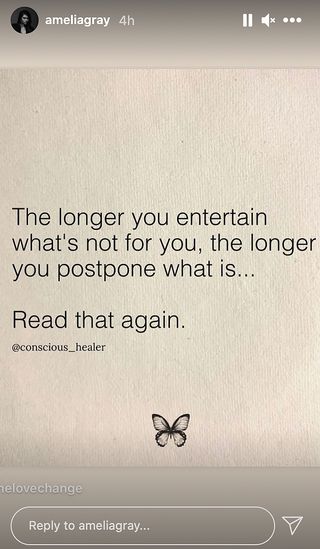 Add to this the fact that Amelia’s most recent cryptic post came just a few days after Kim Kardashian declared her support for Kourtney and Travis’ relationship during an appearance on The Ellen DeGeneres Show and even hinted that Travis would be a part of Kardashians’ new Hulu show.

“I’m assuming that ‘cause [Travis is] such a big part of Kourtney’s life, that hopefully they will be on,” she said when asked if Travis would be on the show. “I love their relationship.”

All of this culminated in Scott unfollowing not just Amelia and Kourtney, but the rest of the Kardashian-Jenner fam as well.

Why did Scott get so triggered by the Kardashians supporting Travis and Kourtney’s relationship?

One possible explanation for Scott’s reaction traces back to something he discussed openly during the final season of KUWTK: His fear that, without the show and its regular shooting schedule, he would grow apart from the rest of the family.

“I think what we have here is amazing,” he said during a confessional interview in one episode (per Buzzfeed). “My biggest fear is that we’ll float apart, and not see each other nearly as much, because if we don’t work together every day we’re surely not going to see each other every day. It’s very sad to me, you know, it’s just kind of the ending of an era.”

Kourtney and Kim even discussed Scott’s apparent fears about series ending in an episode.

“I feel like Scott, he feels like maybe as a family we’re going to be gone if we’re not scheduled to all meetup,” Kim told Kourtney in the clip.

While Kourtney said, “I think it’s just change, some people have a really hard time with change.”

Kim went on to tease out some of the specific reasons change might be scary for Scott, like struggles with alcohol.

Will Scott be a part of the Kardashians’ Hulu series?

In May, Kim actually confirmed that Scott would be a part of the Hulu series when responding to a fan reacting to Scott’s sadness about the end of KUWTK.

“But @ScottDisick is coming with us to Hulu sooooooo I get it BUT he will be back!!!!” Kim wrote.