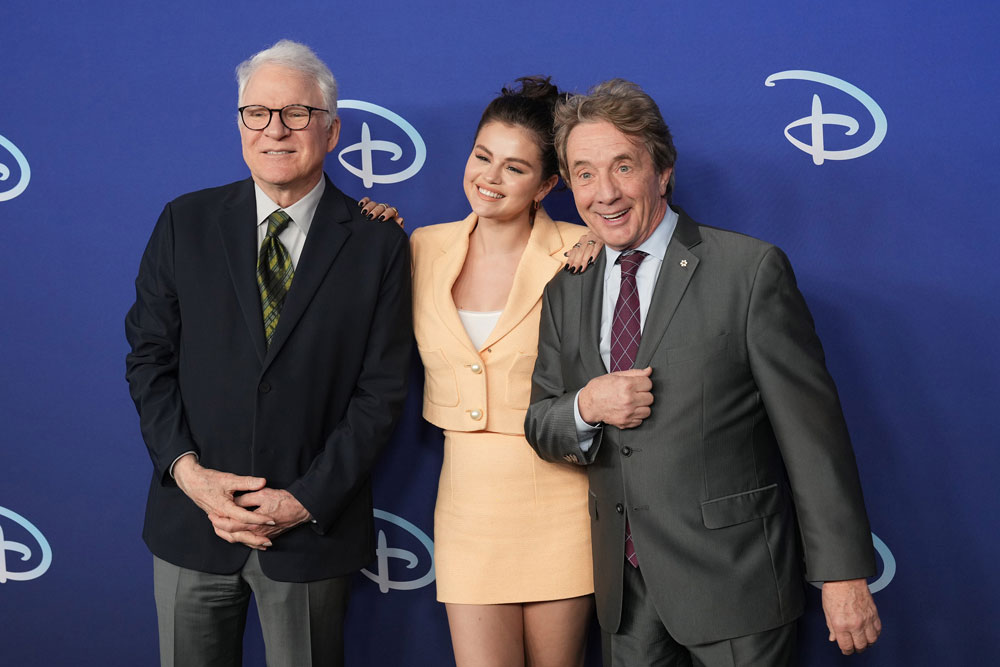 The main trio from Only Murders in the Building appeared at Disney’s upfronts presentation in New York and obviously stopped for some press interviews since the show’s second season is premiering in about a month. The three leads stopped for an interview with ET Online and since they couldn’t say much about the second season of Only Murders, they talked about social media and Selena hosting SNL. Steve Martin appeared in one of her her pre-recorded sketches, it’s a shame Martin Short wasn’t in one too.

On if she’ll introduce Steve Martin and Martin Short to TikTok
It’s a much more easy, flowing, kinder community on TikTok. I don’t know if they get it.

On hosting SNL
It was so much fun, I had a blast, I had [Steve and Martin’s] support, I had Amy Schumer’s support… it was a dream come true.

For someone who talks about how she hasn’t been online for over four years, Selena sure seems pretty online and talks about it enough. She has a Twitter and an Instagram and apparently a TikTok. How does it work, does someone run them for her and tell her what content to create to promote her projects and stay on trend? Or does she tell them things she wants to tweet and post? That makes sense for Twitter and Instagram, but having a TikTok seems more online because there seem to be a lot of trends (idk what to call them because I don’t have a TikTok) that you only really understand if you’re on TikTok yourself. What Selena says about TikTok is something I’ve heard from others as well — that it’s a better alternative to Instagram, which is overwhelmingly fake and makes people feel bad. I agree about Instagram, but I only have that because I don’t need yet another time suck. I’ve been trying to minimize my time on Instagram as it is (there are other things I could be doing) so I don’t need to add another app to stare at on my phone, even if it is a more relaxed community.

How was snl? Iconic and I tried to be cool

Photos credit: Instar and via TikTok