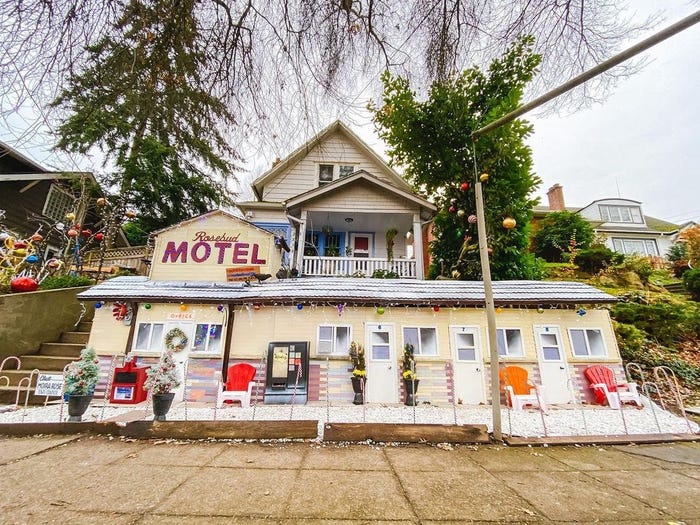 Warning: Spoilers ahead for "Schitt's Creek."

Johnny Rose and his family might be long gone from the Rosebud Motel on the show "Schitt's Creek," but you can still visit the iconic motel one last time.

The show's official Instagram account shared that Richard Knowles, a fan in Seattle, Washington, re-created the motel with painstaking attention to detail on his front lawn as a part of his Christmas decorations.

Knowles' re-creation looks like a miniature version of the real thing, down to the colorful chairs and plants outside the rooms' doors, except with more wreaths, candy canes, and fairy lights than usual. It has the same number of rooms and even the exact same number of windows as the real Rosebud Motel's office.

Knowles shared on Reddit that it took him about a month to build the 25-foot wide by 12-foot tall creation. He added that he was comfortable with people visiting his front lawn to take pictures.

"I just wanted to bring some joy to a not so joyous year and it has seemed to work," he wrote.

"Schitt's Creek," the show that inspired the decorations, ran for six seasons before concluding earlier this year.

The plot followed the misfortunes of the Rose family after they lost their home and practically all of their wealth, except for one asset: a town by the name of Schitt's Creek. They relocate to the town and stay at the Rosebud Motel, formerly known as "Motel," while they try to build their lives back from scratch.

The miniature version gets the number of rooms, the overall look and color of the motel, and the big sign right. However, if you look closely, there are many other, smaller details that will delight fans of the show.

Take the newspaper box with copies of the "Elmdale Chronicle," the local paper, inside it, for example. Elmdale is the name of a neighboring town where residents of Schitt's Creek go to run errands and, in the case of David Rose, for unsuccessful job hunts.

No one was less thrilled to move to Schitt's Creek than actress and somewhat-accomplished singer Moira Rose but she gradually found her way to the town council. The signs, from when she was running, provide the plot of an entire episode when they go missing under very suspicious circumstances.

In Knowles' re-creation, however, they remain safely planted on his front lawn.

Other interesting details include the black vending machine pictured above and Stevie's office. Stevie Budd, also pictured above, starts off working the front desk at the motel before becoming a co-owner.

The re-creation has a murder of crows sitting on its roof in a nod to Moira's much-anticipated, and iconic, comeback movie, "The Crows Have Eyes III: The Crowening."

"Schitt's Creek" was created by father-son duo Eugene and Dan Levy, who also played on-screen father and son Johnny and David on the show. The final season "swept the Emmys in the comedy categories," Insider reporter Kirsten Acuna previously wrote.

"This has been the greatest experience of my life," Dan Levy said of working on "Schitt's Creek" during his acceptance speech for best supporting actor in a comedy series.

All six seasons of "Schitt's Creek" are currently streaming on Netflix.