Samsung has come a long way since their start more than 80 years ago, with the once, small South Korean brand quickly becoming an industry leader worldwide in manufacturing high-tech electronics, home goods and wearables, constantly innovating and pushing the boundaries of what our devices can do. Samsung has really come into its own as the maker of smart and sophisticated phones too, matching brands like Apple on chic and sleek design, while besting many competitors when it comes to features and functionality.

If you’re looking for a reliable, durable, and cutting-edge phone, we’ve rounded up four of the best Samsung phones that can handle things like stunning photography, standout filmmaking, and of course phone calls too.

From Making Matcha to Tie-Dye, 10 Things We Perfected After Being Stuck at Home for a Year

'We Are Better People Because of John Lennon'

Samsung’s Galaxy S21 Ultra is a step up from the last gen, and proves the brand is a serious player in the smartphone game, with an impressive ability to merge technical features with chic, contemporary design.

Powered by QualComm’s SnapDragon 888 processor, the Ultra’s screen is big and bright, with curved sides wrapping around for an extra-wide effect, and still providing plenty of room to comfortably hold it. 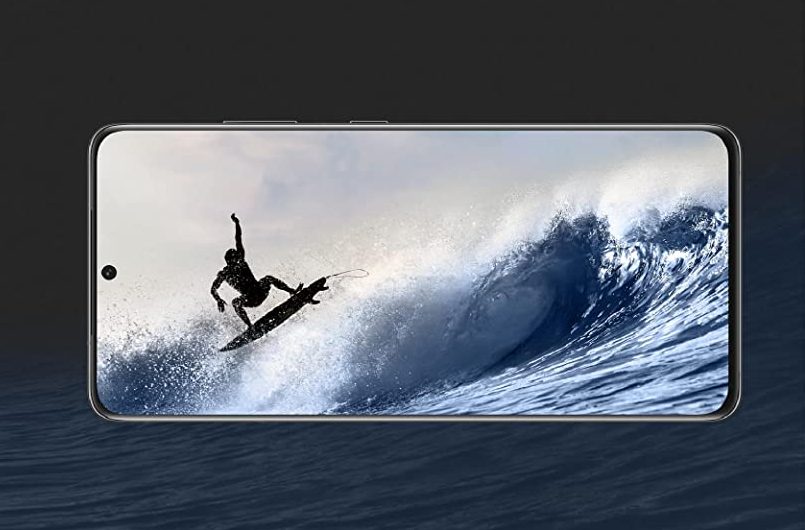 A sleek frosted matte black backing includes the camera module as one smooth unit, and packs two telephoto lenses at 3X and 10X optical zooms, letting you take photos from afar without getting pixelated pics or sacrificing quality. The HM3 sensor has a 3x wider dynamic range, and can capture 64x richer colors in 12-bit RAW file types.

An upgraded 108MP(!) camera with a 100x zoom makes capturing photos in 12-bit HDR easy for anyone, and there’s an almost endless array of camera settings and tools for that just-right shot. The 108MP is the highest-resolution camera you can get in a phone today. 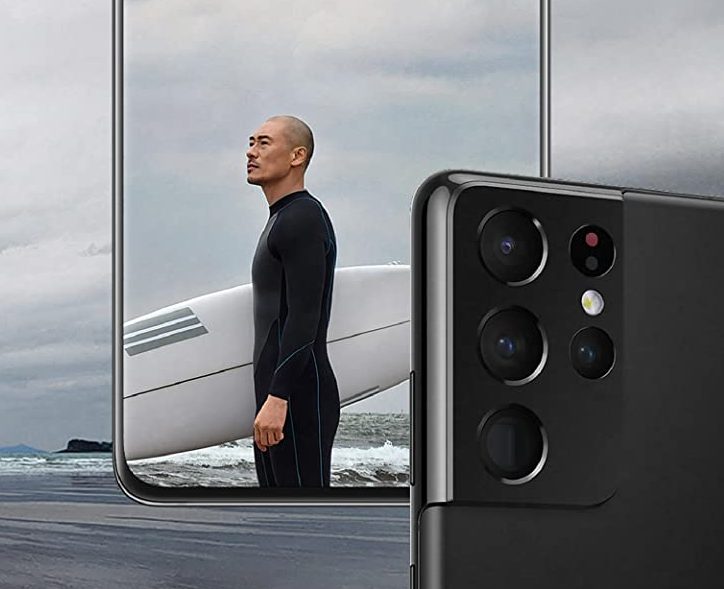 Filming in 4K video at 60fps has handy features too, like Director’s View, where you have the option to film using different lenses all at once to see what works best, and Vlogger View, where you can film both front and back at the same time. Auto-focus works fast, and the shutter speed snaps in the blink of an eye.

The phone has a well-built weight to it, with a 5000mAh battery that can track your user stats to see what’s eating up your charge, but it’s still powerful enough that it’ll get you through a full day of usage. It also charges wirelessly, and thanks to Power Sharing, can even fuel up an additional device wirelessly, and automatically adjust to 60Hz to conserve battery life when needed.

Samsung also included the popular S Pen with the Galaxy Ultra S21, which is super convenient for quickly swiping, scrolling, and accurately pinpointing precise pixels more efficiently than with a finger.

Security isn’t an afterthought either. With a new generation of fingerprint scanner that’s 1.7 times larger than the last gen, you’re able to unlock the phone easily even when the display is off.

RAM and storage is faster, as are the GPU and 5G speeds. Bluetooth is the latest 5.2, with a stronger connection to other devices, and same goes for the built-in WiFi 6E. Samsung’s always been on top of their game with pushing out the latest software patches to keep phones current and safe, and the Galaxy S21 Ultra is no different, with three years of system updates and four years of security updates. 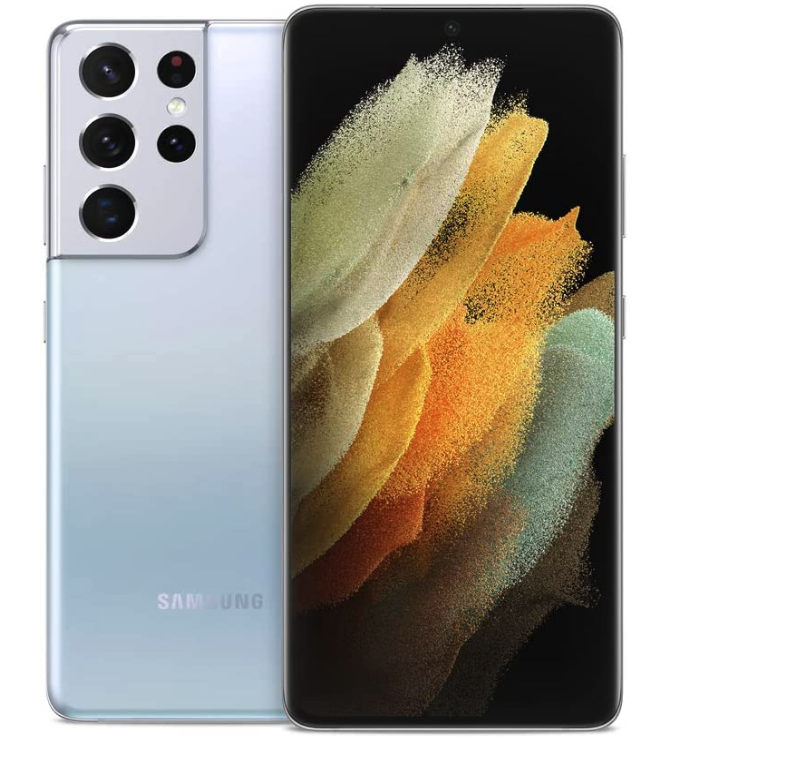 It’s easy to see why the Note 20 Ultra stands out. Literally, in any lighting condition, the edgeless 6.9-inch AMOLED 2X display is still vivid and visible, adjusting to the brightness of your surroundings without draining battery life.

Everything about the Galaxy Note20 Ultra is smooth: The interface, the 120Hz speed, the 1440p resolution, and particularly the S Pen. This included pen isn’t just a novelty — it’s extremely practical, with pinpoint accuracy that makes everything easier, from drawing and gaming, to just doing regular tasks faster (like taking a screenshot, recording audio or exiting an app_. It’s always there, conveniently stored inside the phone’s frame, for whenever an idea might strike. And if you quickly scribble something down in sloppy handwriting, no worries; Notes can straighten that out, converting your scratches into neat and legible text. Samsung Notes also makes linking and syncing up to other devices effortless, with auto-saving across multiple gadgets.

The 8K camera films in ultra high-res, with plenty of pro-grade video options to turn anyone into a filmmaker. Same goes for photographers too – with a lightning-fast shutter speed and Laser Auto-Focus, along with zooming capabilities and a 108MP sensor, this phone captures your subject acutely and accurately.

If you’ve got a Smart TV, especially a Samsung model, the DeX5 feature lets you wirelessly mirror your screen, giving you the power to control both at the same time. And battery life is designed to last all day, with the ability to fuel up 50 percent in just 30 minutes.

There’s also the Galaxy S20 FE, with a streamlined version of this phone’s favorite features, at an affordable price point. 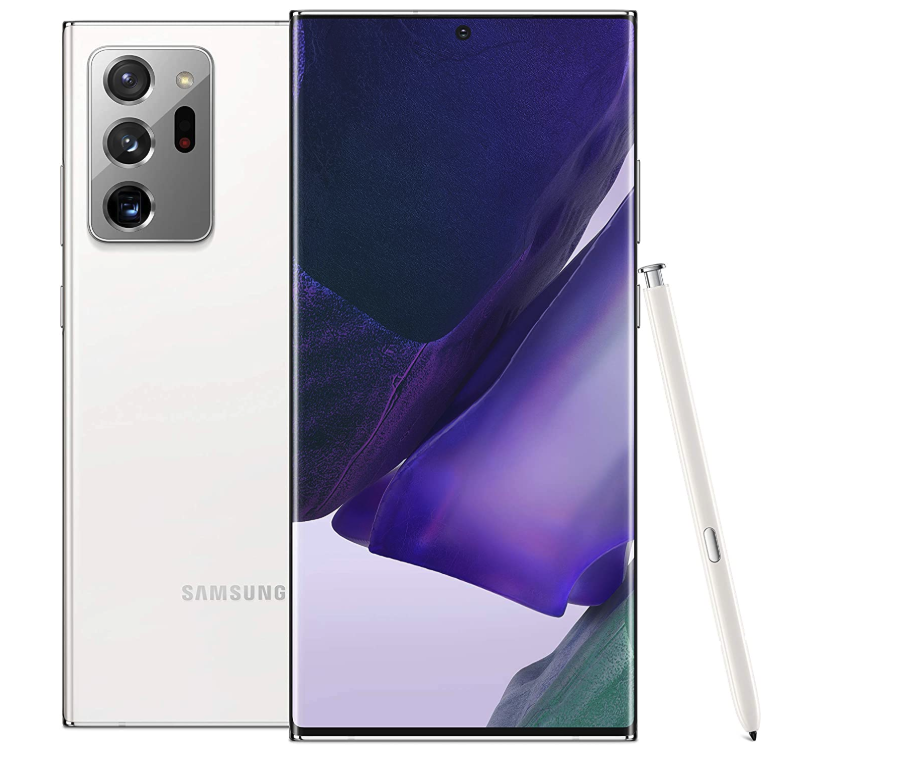 Those of us who had flip phones in the early 2000s can recall how satisfying it was to clap it closed after a conversation ended. Technology has improved beyond recognition since then, with bigger and brighter displays capable of things those phones could only dream of. But Samsung has managed to combine the tech of today with the classic flip-shut design of the past.

The Galaxy Z Fold 2 5G opens horizontally, like a book, but can still function even while shut. The 60Hz front screen is pretty close to a regular smartphone’s, at 6.1-inches. Inside, the wide 7.6-inch 120Hz display is made from scratch-resistant, ultra-thin glass, giving you instant access to a screen that acts as a middle ground between a phone and tablet.

No matter which way you fold and flip it, the three cameras have got you covered, with one on the back, one on the front and another inside. 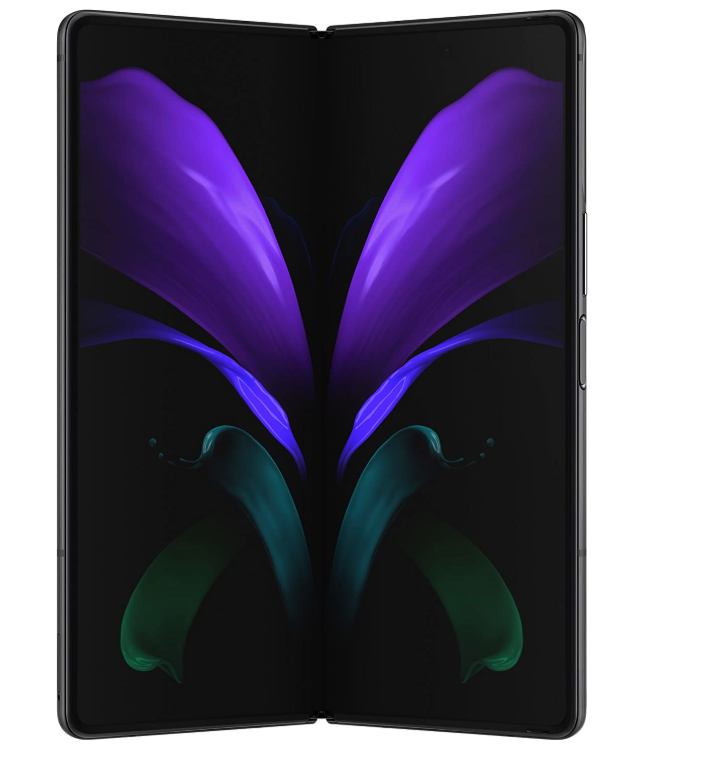 For a top-down vertical fold, the Galaxy Z Flip is designed to live up to its name, with 200,000 test folds and a hinge that’s ready for it. Not only that, but it can also remain steady at any angle you set it down at, creating two separate usable zones on the screen where you can run two different apps at once.

The glass display is resistant to scratches, and shines bright without leaving a folding crease through the center. There’s even a convenient tiny display on the phone’s front when closed, showing the time, date, battery life, and still functioning with the back camera to frame a shot.

The phone folds up tight, leaving no room for dust and debris to creep in when it’s not in use. It’s also way less bulky than a normal-sized smartphone when folded, cutting the size into a half-sized square that’s easier on your pockets. 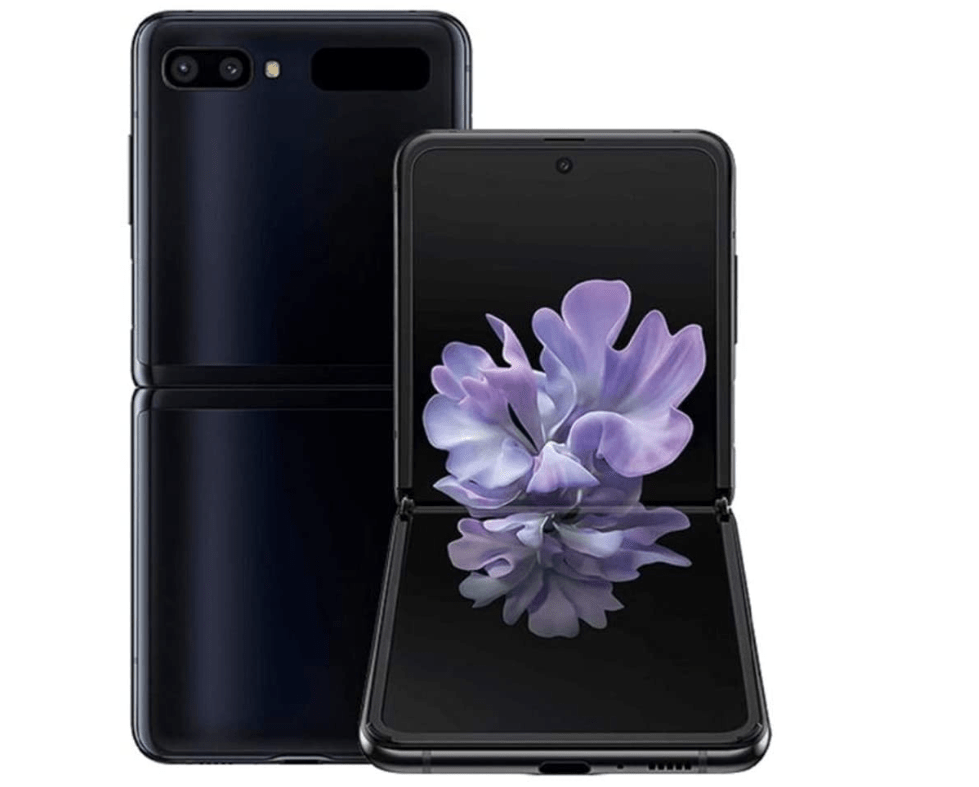