‘Is it on back to front?’: Holly Willoughby sends fans wild as she bares her cleavage in VERY low cut dress for Dancing On Ice Christmas special

Viewers on Twitter went wild when Holly stepped out in the dress with her presenting partner Phillip Schofield on Sunday night’s show.

The presenter, 38, wowed in the maxi dress, which gave an ample view of her assets, prompting one viewer to ask if she was wearing her dress ‘back to front’. 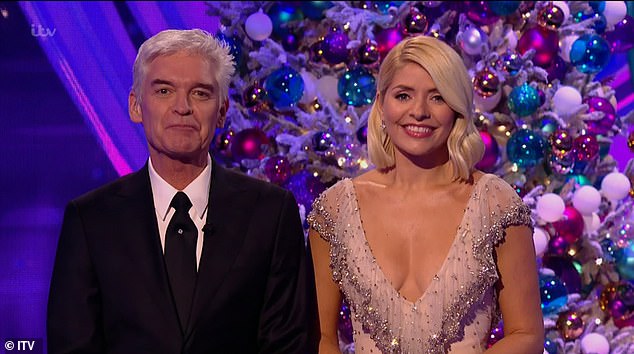 Wow: Holly Willougbhy, 38, excited fans with her extremely low cut dress on the Dancing On Ice Christmas special on Sunday when she stepped out with Phillip Schofield

They wrote: ‘Stouthearted! Holly’s got her dress on back to front #DancingOnIce’.

Another alluded to her nickname on Celebrity Juice, writing: ‘I see Holly’s got her Willowboobies Out.’

A third wrote: ‘Holly’s dress is rather distracting. #DancingOnIce.’

And a fourth besotted fan added: ‘Christ on a bike! Holly Willoughby might as well be topless wearing a dress like that! #Dancing On Ice’. 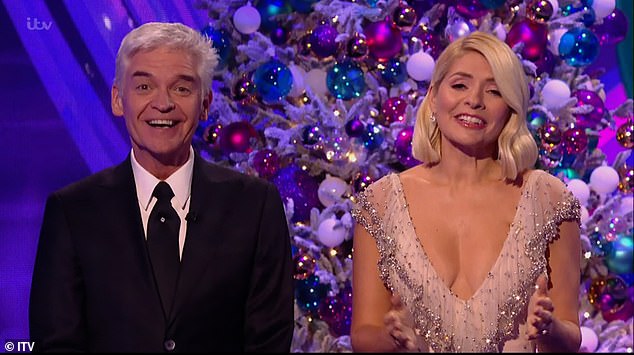 Incredible: The presenter wowed in the maxi dress, which gave an ample view of her assets, prompting one viewer to ask if she was wearing her dress ‘back to front’

It comes after Holly was awkwardly quizzed about ‘difficult co-hosts’ during an appearance on The One Show on Wednesday.

Hosts Patrick Kielty and Alex Scott claimed that there has been a lot of talk about tricky co-hosts in the media at the moment, potentially hinting at the furore currently surrounding This Morning’s Phillip Schofield.

They then said they were going to ask Holly one question on the topic, to which she seemed slightly confused and simply replied saying: ‘Oh!’.

However rather than asking about her rumoured feud with Phillip, 57, they instead asked what it was like to work with Bradley Walsh on their one-off Christmas special Take Off With Bradley and Holly.

Humour: Dozens of fans were bowled over by the dress, with one joking that Holly had her ‘Willowboobies’ out

Holly joked: ‘He’s a complete nightmare because he never knows what’s going on Normally with Phil I can sit back a bit and relax.’

Patrick chimed in: ‘Because Phil’s a professional!’

Agreeing with Patrick and once again dismissing any hint of a feud, Holly said: ‘Phil’s a professional, this one comes in and is like “right the rules are this, go on H you tell them!” And I’m like “ahh”, basically I have to do my homework. 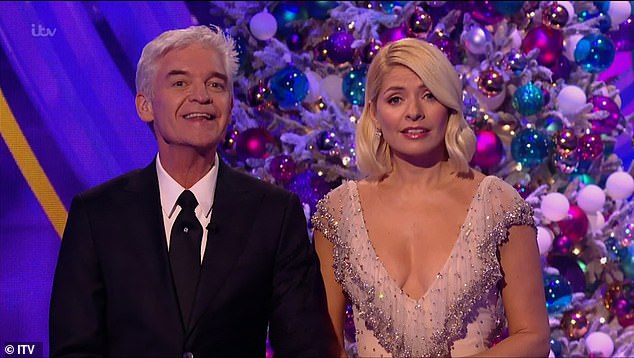 Bradley added: ‘I let H do the heavy lifting and I mess around for three hours.’

Holly then said: ‘See! I have three kids, and now I have four!’

Holly recently declared she’d quit her presenting stint on This Morning if her co-host Phillip left the daytime TV programme.

In a clip from Monday’s upcoming episode of Shopping With Keith Lemon, the ITV star, admitted she couldn’t imagine fronting the show without her TV husband, amid rumours of the feud between the pair. 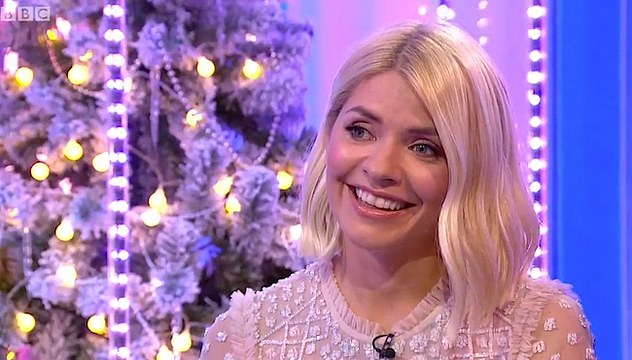 Awks! It comes after Holly was awkwardly quizzed about ‘difficult co-hosts’ during an appearance on The One Show on Wednesday