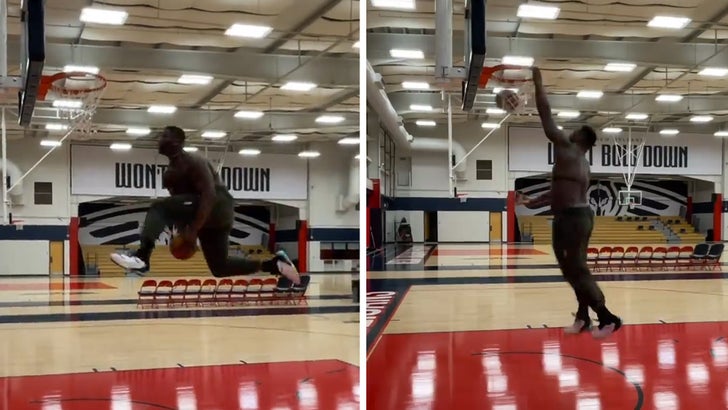 Zion Williamson threw down a monster dunk on Tuesday with no shirt on … and it certainly looks like he’s recovering from his foot injury nicely.

The New Orleans Pelicans star — who fractured his foot during the 2021 offseason — posted video of the ridiculous slam on his social media page … showing signs that he might finally be putting his foot ailments in the rearview mirror.

In the video, you can see Zion getting up with ease, putting the ball through his legs, and then hammering it through the rim.

It’s an amazing sign for Pelicans fans, because even though the former No. 1 overall pick is unlikely to play the rest of this season, it at least shows he’s on the road to getting back to the NBA hardwood at some point.

Williamson has yet to play an entire season due to multiple injuries he’s suffered in his career. In fact, since his rookie year in 2019, he’s only started 85 games.

He’s suffered multiple setbacks with his foot injury this season — but if this clip is any indication, it’s clear he’s well on his way to returning … and with no shirt on, it seems he’s showing to his haters he’s ready to keep his weight down when he gets back too.

Brighter days appear to be ahead, Pels fans.