What is it like to be a female student in a watchmaking class — and to anticipate working in an industry — that is predominantly male? That’s a question I asked young women last year during a visit to the Lycée Edgar Faure, a school in eastern France that has a horology program well regarded by high-end watch brands.

The students said the business was challenging and motivating, and they knew that, as women, they would likely face prejudice. But in their classes, they said, they never did — and some were surprised that I had expected it.

I admired them. When I was a student 20 years ago, I would have been too shy or too intimidated to join a program where men solidly outnumbered the women. And as I’ve written about the watch world in recent years, the articles have almost always been about men; I rarely interviewed a woman.

I wanted to hear what the students had to say, so I sent emails to three prominent schools — the École Technique de la Vallée de Joux in Switzerland, Hiko Mizuno College of Jewelry in Tokyo and Faure — asking to speak to a female watchmaking student and sending along a few sample questions. Over the next few days I got a dozen replies, forwarded by the principals, and then set up interviews. Given the opportunity to express themselves, these women seized it. 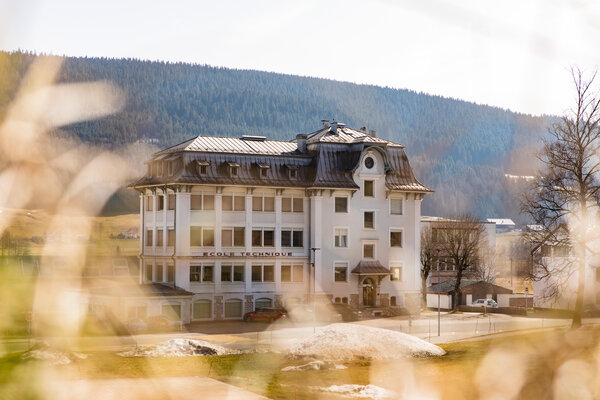 “I realize that there are more and more women who want to become watchmakers and who are also interested in all other manual trades, and I find that very cool,” said Marie Witz, an 18-year-old horology student at Vallée de Joux. “It doesn’t really bother me to know that we are outnumbered, and I even find that’s pretty amazing.”

After all, she said, “I don’t think I’m worse or better than a man because sex doesn’t matter in this business. I think we have the same ability to make a watch work.”

Laure Amstutz, 19, is another Vallée de Joux student unfazed by an apparent imbalance. “Don’t be impressed by the number of boys, because we have the same capacity as them.”

“Afraid to Break a Nail?”

At all three schools, just a third of the horology students are women. And that actually is an improvement.

Mizuno’s program, for example, had no female students when it started in 1995. (And Japan continues to lag other industrialized nations when it comes to gender equality, ranking 121 out of 153 countries in the 2020 global gender gap index compiled by the World Economic Forum; France ranked 15th and Switzerland, 18th.)

And Clémence Decrette, 21, a third-year student at Vallée de Joux, said some of her teachers said “it would sometimes be beneficial to have more girls since we are apparently more skilled with our hands. Still, we can see that there are now more girls in watchmaking than before. Two years ago, one of the classes of this watchmaking program was made up of only boys.”

The school’s program is similar to the ones offered in France and Japan: lathe work, assembly, finishing, creating cases and doing repairs. The workshop practice is supplemented by subjects like watchmaking theory, mathematics, physics and professional drawing.

“I don’t feel any particular problems being a woman among my classmates,” Émilie Detouillon, 22, a student in Faure’s seven-year diploma program, wrote in an email. “We sometimes get a few jokes or comments, but no more than in any other industry where you’ll always find people with predefined ideas about women.”

For example, she said, “If you take care of yourself, you might hear the stereotypical ‘aren’t you afraid to break a nail?’ line.”

What attracts a woman to watchmaking? In Switzerland and eastern France, many horology students — female and male alike — have grown up surrounded by the industry. High-end brands are prominent businesses in the region, and often students have had family, friends or neighbors employed there.

Ms. Decrette said she was just 14 when she did a three-day internship at Blancpain, a Swiss brand headquartered not far from her current school in the Vallée de Joux, an area considered one of the birthplaces of haute horology.

“The moment I sat down at that workbench and picked up the screwdriver and tweezers, I knew this was what I wanted to do,” she said.

She loves restoring antique movements and, after graduation, wants to take specialized training in restoration and complications at École Technique Le Locle in Switzerland. “An antique watch has lived with a person before,” she said. “The balance is like a beating heart of the watch. When we manage to make the watch’s heart work, we also bring back to life the owner’s story.”

Her classmate, 28-year-old Roxane Ochoa, said in an email that she was inspired by her grandfather, Philippe Thorimbert, a watchmaker who worked at several companies, including Longines, Rolex and Movado, and then had his own small workshop at home until he died last year of Covid-19. “Since I was little, he would tell us about this trade that he loved,” she wrote. “He was really passionate about his job.”

“I chose this profession because I like its manual aspect,” she said. “When you manage to fix a piece that you have been working on, it’s a very pleasant and satisfying feeling.”

For Mao Tsuzuki, 23, a Tokyo resident who is finishing the three-year master course at Mizuno, the appeal was similar. “I get fascinated every time I go to a home improvement store, just looking at the screwdrivers and checking out all the tools,” she said.

The principal at Faure, Florence Burger, said female students today are different from their predecessors. “Girls are more daring these days,” she said. “And it stems from their own willingness, even though they don’t necessarily realize it.”

Ms. Burger said she believed societal changes had made their confidence possible, and the school must support that evolution. “In the school environment we must keep pushing girls to be more daring and boys to be more accepting,” she said.

“We Have to Work Harder”

High-end watchmaking has long been associated with men, but women have always played essential roles.

In Switzerland, where the industry began with farmers spending the long winters making watches, wives helped their husbands make parts. By the late 1700s, as mass production of Swiss watches became common, women were employed to work with tiny pieces like hairsprings because they (and their smaller hands) were considered better for precision work. As Japan’s watchmaking industry industrialized through the 1900s, women were often found on the assembly lines there, too.

And last year the Swiss watch employers’ federation reported that 32,536 men and 25,014 women worked in the watchmaking industry — but 1,338 men held executive positions while only 278 women did.

Ms. Decrette, at Vallée de Joux, says she knows the industry continues to discriminate against women. “This is why it’s nice to see in recent years more and more women are becoming C.E.O. of large groups, such as Catherine Rénier at Jaeger-LeCoultre,” she said.

And it is why, Ms. Detouillon said, she hopes the industry will begin to showcase more female watchmakers: “We lack iconic female figures in this area.”

Ms. Detouillon also is concerned about her own future after she graduates from Faure. “I will soon start my career and, to tell you the truth, I wonder a lot about my role as a woman in a company,” she said.

“We are easily judged by our physical appearance, such as how we dress, whether or not we wear makeup,” she said. “We are generally quickly judged and considered more delicate and fragile. It’s a reality that men will also be the victim of prejudice regarding their young age or physical appearance. But as women we have this challenge: In addition to having this image that sticks to us, we have to work harder to have our work recognized and taken seriously.”

She already has encountered difficulties. “In the various internships that I have done,” she said, “I have sometimes found myself in situations where people flirt with me instead of teaching me things, and in this kind of situation we don’t feel we are taken seriously at all and that can quickly become a real issue.”

“I Dream Above All”

The pandemic, which slashed Swiss watch exports last year in 19 of the industry’s top 20 markets (China being the exception), also has affected the schools, with classes sometimes disrupted and opportunities missed.

Ms. Tsuzuki won the 2020 Richemont Award as the top Mizuno horology student, but because of travel restrictions could not claim the prize — two weeks at a Richemont-brand factory in Europe. But she is to start work for Richemont Japan after her graduation later this month. The two events are not related; despite the award, she said, she had to interview for the watch repair job in the group’s customer service department.

“I like customer service, as watches have an owner and a story,” she said. “Every watch has a personality, depending on the owner. I’m fascinated with the stories.”

Ms. Detouillon, who is to graduate from Faure in June, has decided to delay her job hunt and is looking at schools in Switzerland where she can obtain additional training in watch decoration techniques. “After my diploma I would like to specialize in decoration in general,” she said. “I would love to travel, and if I have the opportunity to work overseas, I think I will.

“But for the time being, I dream above all of being able to find a job in the middle of this pandemic, and especially of being able to have the opportunity to choose something that fascinates me.”