MOST people dream of the perfect proposal, with romance and thoughtfulness often in mind.

But one bloke has been slammed after allegedly popping the question while his girlfriend was on the loo – and they even bought a sex swing to celebrate. 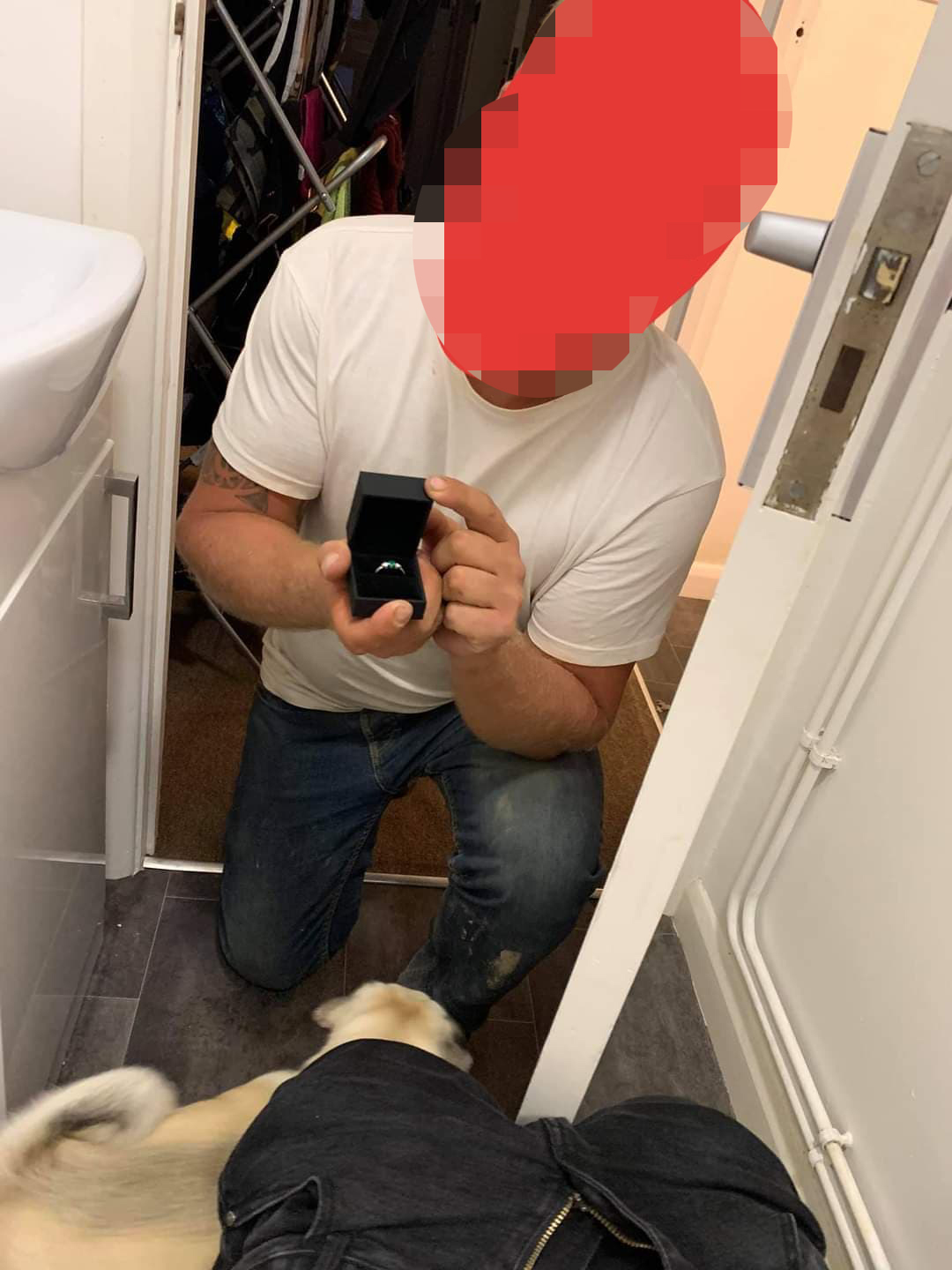 The moment was caught on camera, seemingly by the loved up bride-to-be, who then shared snaps online in a wedding shaming Facebook group.

One photo shows the her bloke down on one knee with the ring in hand as she sits with her jeans pulled down.

The other shows a close up of the couple hand-in-hand as she shows off her new engagement ring.

Sharing the news with the online group, the newly-engaged woman wrote: "So most random engagement! 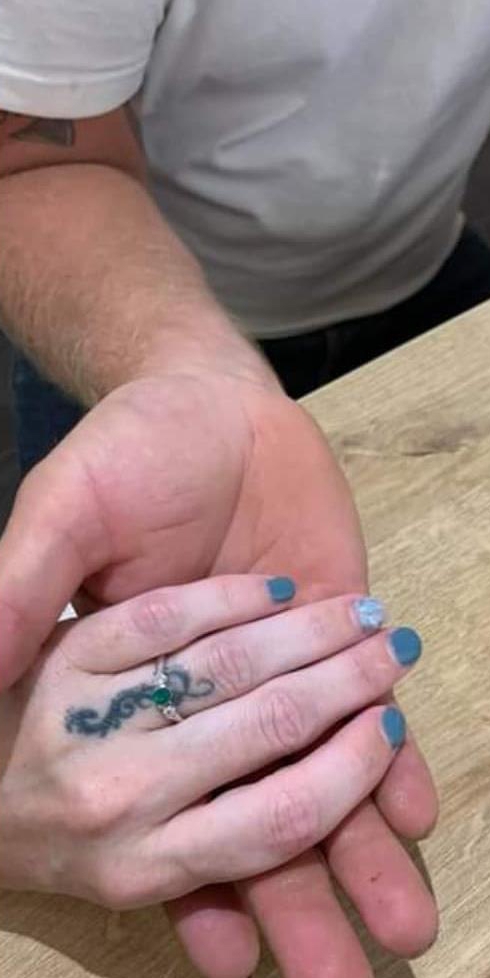 "I've got friends in this group, so they will know that this is just me. My fella proposed while I was on the toilet."

And added: "Edit: To celebrate our engagement, he just ordered a sex swing."

And another questioned: "'Why did she even let him in the bathroom?!"

"Was she waiting for him to propose or a photographer was hidden in the toilet?" questioned a third. 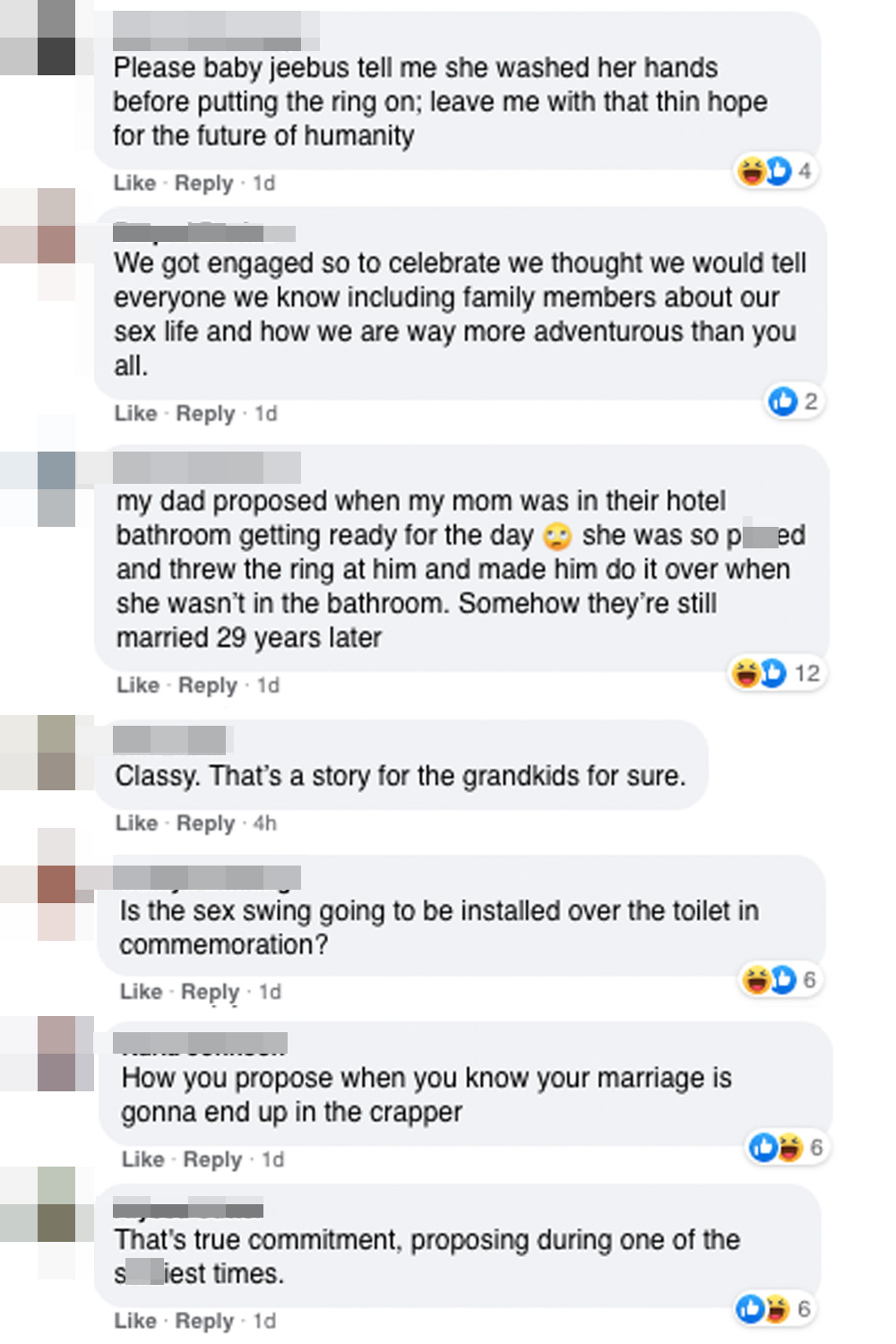 And another added: "If someone barged in on me in the bathroom, ring or not, they’re getting kicked."

Others joked that "romance was dead," while many quipped it was some "romantic s***".

One person took aim at how the couple chose to celebrate, while others revealed it was too much information.

One said: "Why do people need to know about their sex swing? Just why is that necessary?"

"Why would you flex that on social media?" questioned another.

We also shared how a scorned wife outs her ‘cheating’ husband by sticking up flyers around their area, but people say she’s in the wrong.

And a woman writes hilarious review for Asda wafer-thin ham after her husband compares it to something VERY rude.

Meanwhile a devastated woman gets brutal note from neighbour telling her to dump her bloke… because they’d just had sex.