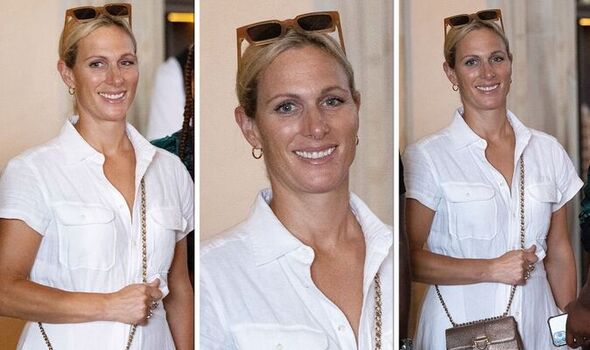 Zara and Mike have been pictured together in Australia after the royal flew down under to greet her husband as he left the I’m A Celebrity camp. Yesterday, November 28, the royal couple spent the morning watching the show’s final, before heading to Sea World, along with their three children. Zara looked summery in a white dress.

Zara and Mike took their three children, Mia, eight, Lena, four, and Lucas, one, to the theme park on Australia’s Gold Coast.

Mike donned a navy blue t-shirt and matching shorts, which highlighted his I’m A Celebrity weight loss – the result of three weeks of jungle rations.

The dress’ bodice replicated a shirt, featuring a wide collar and two chest pockets. There were also buttons running down its centre.

It then cinched in at the waist with a loose belt, which Zara had tied around her middle.

The dress then billowed outwards towards Zara’s shins, and was slightly pleated.

The dress was the Ralph Lauren White Linen Tiered Shirt Dress, which Zara has worn before.

Costing £265, the royal donned the dress at Wimbledon earlier this year.

Ralph Lauren described the dress on its website, saying: “Channelling pure Polo style, this shirtdress is made from breathable, lightweight linen.

“It’s finished with a self-belt at the tiered skirt.”

Zara accessorised with an understated Rolex, called Yacht-Master 40 Watch in Everose Gold, which she has owned since 2015. The piece costs a whopping £23,550.

To complete the look, she wore a pair of Veja trainers on her feet.

The shoes are the Campo Suede-Trimmed Leather Sneakers, which Zara has worn many times in the past. They cost £130 on fashion website Net-A-Porter.

Zara’s blonde locks were tied back in a bun at the back of her head, and she wore a stylish pair of pink, square-shaped sunglasses.

Royal fans were quick to comment on Zara’s look, with most praising her summery outfit.

Meanwhile, user @birdnerd327 had a different opinion. They said: “Not a fan of this dress. Dislike the length and bottom.”