Sophie Brussaux posted a stunning photo of herself sunbathing in a bikini while vacationing in Aruba on Jan. 3.

Sophie Brussaux is ringing in the New Year with a tropical vacation in Aruba. The former model took to Instagram on Jan. 3 to share a photo from her travels. In the pic, she’s wearing an orange string bikini with a floral pattern and lounging on the side of a boat. The bright blue water goes on for miles in the background, and Sophie’s hair is wet and slicked back from taking a dip. “In love with this island and its people,” she captioned the pic. “It’s our island now.”

Sophie is the mother of Drake’s four-year-old son, Adonis Graham, but it looks like she may have gotten a break from mommy duty to take this vacation. Drake was linked to Sophie at the beginning of 2017, and Adonis was born that October. However, it wasn’t until the spring of 2018 that news that Drake had fathered a child came out. The information was shared by Pusha T, who was feuding with Drake at the time. Drizzy then confirmed the news himself on his album Scorpion, which came out in June 2018.  Later, Drake explained that he didn’t talk publicly about his son sooner because he was waiting on the results of a paternity test.

Although Drake and Sophie kept Adonis out of the spotlight for the first two years of his life, Drake shared the first photos of his son on Instagram in 2020. “I don’t want to feel like just because of a life choice I made to be a ‘celebrity’ that I got to make everybody live under this blanket,” he explained, regarding his decision to post the pic. “I just wanted to free myself of that.”

Since then, Adonis has popped up on both of his parents’ Instagram pages quite a bit. Drake also brought Adonis to an NBA playoff game earlier this year, and he was by his dad’s side at the Billboard Music Awards in May 2021. It was Adonis’ first public appearance, and he was a bit overwhelmed when the rapper brought him onstage, but he was definitely totally adorable! 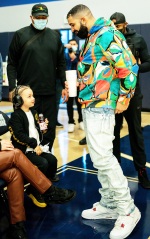 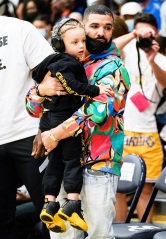 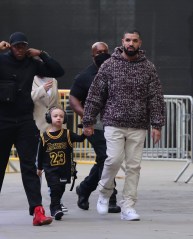