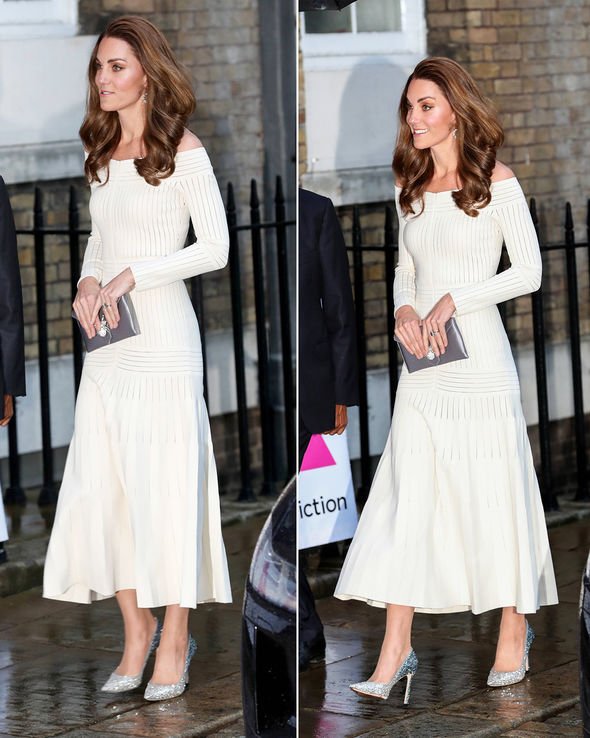 Kate Middleton looked elegant in a cream bardot dress as she attended the gala dinner at the Spring Restaurant in London. The Duchess of Cambridge wore a cream dress which featured a stripy design as she attended the meal hosted by Action on Addiction and chef Skye Gyngell. The long-sleeved dress left her shoulders bare and created a pinstripe effect with vertical and horizontal lines which she first wore in 2016. Kate was spotted braving the weather as she opted to battle the rain without a jacket.

The garment had a fitted style which continued down past her hips.

The dress was pulled in at the waist by a band of horizontal stripes.

Cutting off just above the ankle, the dress flared out into a pleated skirt towards the bottom.

The Duchess decided to add some sparkle to her outfit with a pair of silver sparkly high-heels. 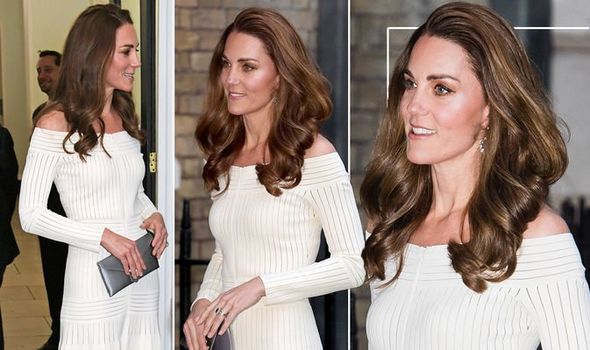 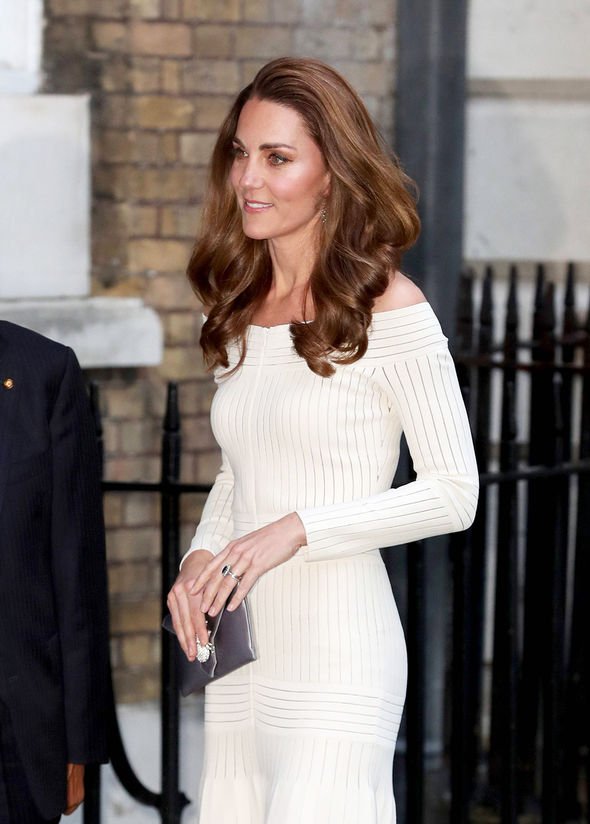 Kate kept her jewellery to a minimum, wearing only a pair of drop diamond earrings.

Her beautiful sapphire engagement ring could also be spotted as she held onto her bag.

She opted for glamorous make-up with peach eyeshadow and a sweep of black eyeliner.

The Duchess of Cambridge wore her hair styled into a bouncy blow-dry.

Kate attended the gala dinner, which is to become an annual event, as the Patron of Action on Addiction. 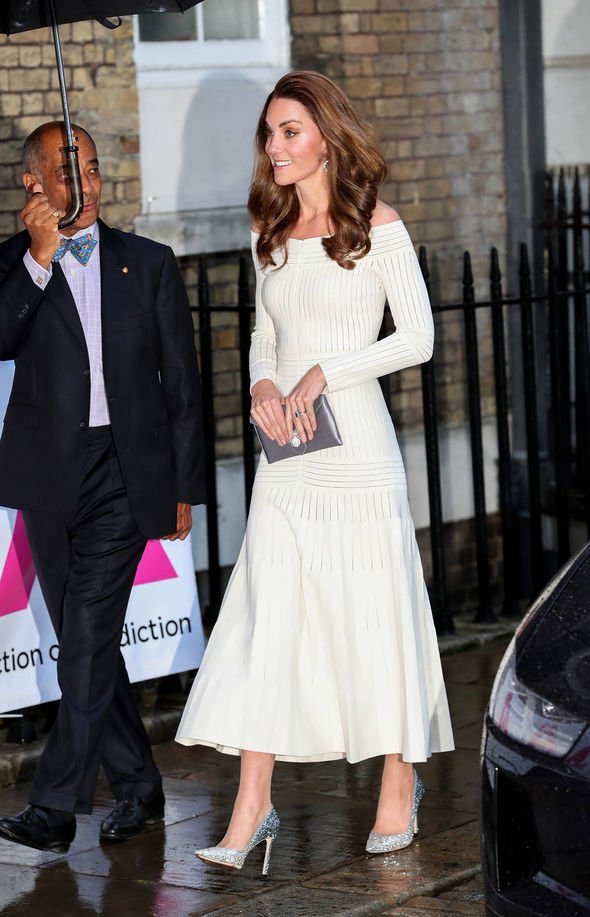 Last week, Kate joined many members of the Royal Family to attend Trooping the Colours at Buckingham Palace.

The Duchess stunned in a pale yellow dress by Alexander McQueen.

The summery design had a slight V-neck line and structured shoulders.

She has also recently been seen in London at the Beating Retreat military pageant at Horse Guards Parade.

For the occasion, Kate wore a pair of large pearl earrings, which cost £4000.

How did Kate Middleton become a royal?

Kate Middleton, or Catherine, Duchess of Cambridge, was born on 9 January 1982 at the Royal Berkshire Hospital, Reading, England.

She was born to Michael and Carole Middleton, a former flight dispatcher and air hostess. The couple founded a party supplies company, Party Pieces, in 1987 – now estimated to be worth £30 million.

Kate has a younger sister Pippa Matthews, 34, and a younger brother James Middleton, 31.

Kate and her family moved to Amman, Jordan, in 1984, where the future Duchess was educated at an English-speaking nursery school.

After moving back to Berkshire the family sent Kate to private school, St Andrews School. She went on to briefly study at Downe House before moving onto Marlborough College where she boarded.

For university the young Kate attended the University of St Andrews in Fife, Scotland. Here she was awarded an undergraduate MA (2:1 Hons) in history of art.

Kate met Prince William when they were both studying at St Andrews, and both living in St Salvator’s Hall. Famously, William reportedly took a fancy to Kate after she wore a see-through dress during a fashion show.

In 2003 the couple began dating and lived together during their second year of university.

The couple split in April 2007, however, in October they were back together.

Prince William proposed to Kate Middleton with his late mother Princess Diana’s engagement ring in October 2010. The couple were holidaying in Kenya at the time.

On 29 April 2011 they married at Westminster Abbey with a whopping 26 million watching the event live.

Kate wore an Alexander McQueen dress worth a reported £250,000 on the big day.