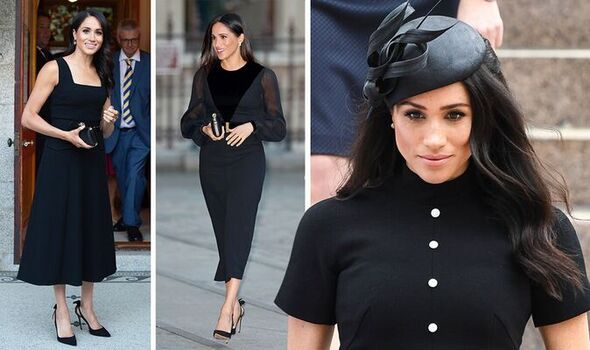 Royal etiquette states black clothing is reserved for periods of royal mourning, but when Meghan Markle was a senior working royal, it was a colour she wore often. Express.co.uk spoke to Tara Jackson, embodied business guide and colour mirrors practitioner about the meanings and feelings associated with the colour black.

When Queen Elizabeth II died, a prolonged period of royal mourning took place before and after her funeral.

Members of the Royal Family like the Princess of Wales, Countess of Wessex and Princesses Beatrice and Eugenie adhered to the strict dress code of wearing dark colours during this period.

Mourning dress has been part of European royal culture for centuries, and it reached its peak in the 19th century with the influence of Queen Victoria.

Widows and close family members were required to wear black, then either white or mauve, for at least three years before being able to return to richly coloured clothing.

While it’s not said to be strictly enforced, royal etiquette dictates black and dark-coloured clothing is reserved for mourning periods only, and most female royals avoid wearing black during official daytime engagements.

But, the Duchess of Sussex regularly chose this colour and varying dark shades when she was a senior working royal.

“It may also reveal fears around having power, being in power, or even claiming your own power.

“Black can also help people feel safe and protected. There may also be an element of not wanting to show your true colours, by wearing the colour black,” she added.

As for why Meghan chose black for many events, Tara reiterated: “There could be a number of reasons why she work black, from wanting to stay hidden, to feeling safe and protected or even perhaps feeling she can’t be her true self.”

A lot of black clothes Meghan wore are from well-known and expensive designers, Tara discussed whether the colour choice was a way of diminishing the brand: “It definitely could be, as well as revealing layers of what she might be feeling on the inside, including a loss of power and wanting to feel safe in clothing she is comfortable in.”

She also commented on whether wearing black is a way for a royal to not take attention away from the event/organisation/charity or speech they are giving: “Yes, absolutely it is a neutral (although powerful) colour which can stay hidden in the background of what is happening.

“There may also be an element of detachment, and wanting to retain sovereignty, in wearing it too.”

In January of that year, Meghan visited the Association of Commonwealth Universities in a black ensemble.

She wore a bespoke Givenchy black caplet coat which featured detail around the shoulder, a round neckline, and large single button on the front with concealed snap button placket.

Underneath she wore a custom Givenchy black dress designed by Clare Waight, that featured a knife-pleats with a tiered and asymmetrical hemline.

Earlier that month, she stepped out of a car in a black bodycon dress from Hatch.

The Eliza black stretch knit dress was designed for growing bodies during all states of pregnancies, and Meghan completed the look with a signature camel trench coat.

When she joined Prince Harry on Christmas Day in 2018, Meghan was pictured in a Victoria Beckham deep navy tailored slim coat, said to retail for £2,596 or $3,085.

A month earlier, Meghan arrived to open Oceania at the Royal Academy of Arts in a Givenchy black velvet-appliqued midi dress.