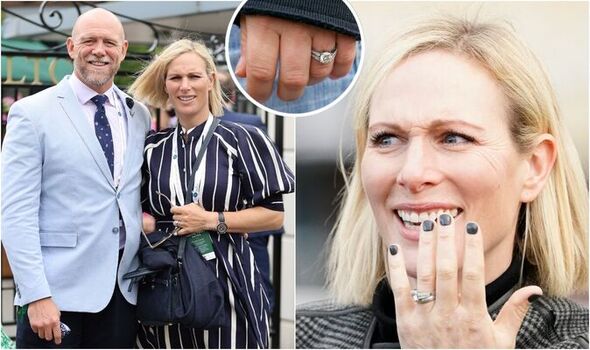 Former rugby union player Mike Tindall had practicality in mind when he was designing and purchasing his wife Zara Phillips’ engagement ring. This was unusual, as royal engagement rings tend to be more stunning and sentimental as opposed to practical, such as Kate Middleton’s rock that previously belonged to Princess Diana.

The I’m a Celebrity star proposed to Princess Anne’s daughter back in 2010 with a split platinum band featuring glittering pavé diamonds, which is estimated to be worth £140,000.

The pretty accessory features a single solitaire diamond that was thought to deliberately have a low profile setting, in order to accommodate Zara’s sporting career.

This meant Olympian Zara would not need to remove her precious gem while competing in equestrian events. In fact, she was spotted wearing it alongside her wedding band at the Land Rover Burghley Horse Trials in 2022, after removing her blue gloves.

Diamond expert, Maxwell Stone from UK retailer Steven Stone spoke to Express.co.uk about royal women who occasionally have to remove their engagement rings for specific reasons, but how Zara is an exception to this.

He said: “With the exception of Queen Letizia, who hasn’t been seen with her sophisticated engagement ring since 2012, it’s incredibly rare to see one of the royal ladies without their precious gem.

“A keen sportswoman, Kate Middleton has an active lifestyle, so it’s a shame that she has to remove her gorgeous sapphire to participate in events.

“Though sapphires are an extremely durable gemstone, Kate’s boasts both sentimental and monetary value, so she wouldn’t want to risk damaging it.

“Mike Tindall actually considered this when he designed Zara Tindall’s engagement ring, ensuring that it had a low profile setting, so she wouldn’t have to remove it when she competed in sporting events.”

She added: “When you’re as active as Zara Tindall, it’s important to have an engagement ring which can keep up.

“Her engagement ring featuring a low set round cut diamond is perfect for that. The minimalist design featuring pave set diamonds gives Zara a ring that perfectly suits her lifestyle.”

The couple tied the knot at Canongate Kirk in Edinburgh in July 2011 in front of senior members of the Royal Family.

On the day, Zara looked stunning in an ivory silk dress fashioned by designer Stewart Parvin.

This was one of her late grandmother, Queen Elizabeth II’s favourite couturiers. It had a fitted bodice, sheer straps and a full skirt.

Zara paired it with a precious Greek tiara that belonged to her mother, Princess Anne, and it consisted of a brilliant-cut diamond surrounded by a glittering wreath.

The late Queen subsequently passed it on to her daughter. Zara and Mike Tindall now have three children together, Mia, eight, Lena, three, and Lucas, one.

Mike and Zara tend to keep their relationship private, but Mike made an exception in an interview with The Times in 2021.

He said: “She’s always been my best friend. That doesn’t change.”