For Sarah Lockman and John Collins, the pivotal moment in their relationship occurred in a most unusual place: high atop the staircase of Mr. Collins’s new home in St. Michael, Md., where he and Ms. Lockman struggled for three hours to carry a futon down the stairs this past January.

“At one point, the futon got stuck on the staircase, and it became a very high-intensity situation,” said Ms. Lockman, 41, a state senator and senate majority whip in the Delaware General Assembly.

“But we were a really good team,” added Ms. Lockman, who is also a single parent raising a 17-year-old daughter in Wilmington, Del. “I felt like we kept each other calm and eventually got through it together.”

Mr. Collins, 35, a partner in FS Vector, a financial services advisory firm based in Washington, said that “despite the circumstances, no one got angry — that was very important.”

The two met in May 2018 at the Delaware Gridiron dinner, a political roast and benefit bringing local politicians and media together.

“She was drop-dead gorgeous and extremely funny,” said Mr. Collins, who graduated from the University of Delaware, from which he also received a master’s degree in public administration.

Ms. Lockman, who is known as “Tizzy,” was impressed with Mr. Collins. “He was really cute and very charming,” she said. “We spoke for about five minutes, and agreed to get coffee when we were less busy.”

They kept in touch, mostly via text messaging and got together one morning the following month for what they both referred to as a “breakfast meeting” in Wilmington, where they drank coffee and talked politics, albeit briefly.

“During that time, my main focus was getting through my primaries,” Ms. Lockman said. “I just didn’t have much time for anything else.”

By October 2018, Ms. Lockman, who graduated from N.Y.U. and received a master’s degree in urban affairs and public policy from the University of Delaware, proved true to her word about spending more time with Mr. Collins. And he impressed her more every time she saw him.

“One of the things I admired about John was his line of work, his job is fascinating,” she said. “But above everything else, he’s just a really well-rounded, hard-working, caring person.”

“Also, I have never seen anyone so beloved by his friends,” she said. “He has been around many of the same people for years, and watching those friendships grow has taught me a lot about the values of caring and sharing. Let’s just say I have some catching up to do in those areas.” 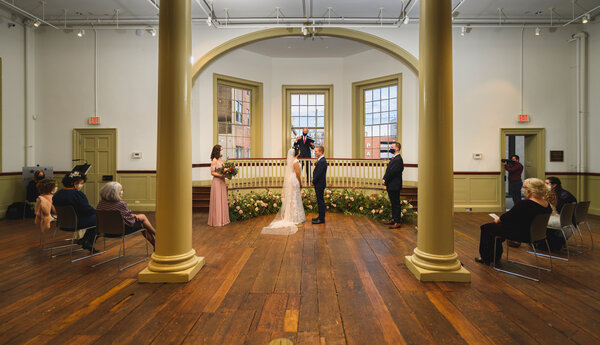 The couple were engaged Oct. 17 in Cape May, N.J., where Ms. Lockman grew up spending summer vacations with her family.

Mr. Collins had nary a doubt he found the right life partner. “I think Tizzy is easily the strongest person that I’ve ever met that also maintains an equal level of kindness,” he said.

Mr. Collins had nary a doubt he had found the right life partner.

“I think Tizzy is easily the strongest person that I’ve ever met that also maintains an equal level of kindness,” he said, adding that she is “just an amazing mother to her daughter.”

“All of that was a really good signal to me that she was capable of providing a kind of enormous love that I wanted to be a part of.”

The couple were married Dec. 12 in Wilmington’s Old Town Hall, which was built in 1798 and housed the Wilmington city government until 1916. The Rev. Canon Lloyd S. Casson, an Episcopal priest, performed the ceremony, with Senator Thomas R. Carper, Democrat of Delaware, taking part, as a celebrant. Sophie Lockman, the bride’s daughter, served as her mother’s maid of honor.

Because of the coronavirus pandemic, the wedding ceremony was witnessed by only immediate family.