A SAVVY mum-of-four has proved that you can completely revamp your kitchen, even if you only have a budget of £100.

Jo Honey, 43, from Northumberland, used inexpensive materials and spray paint to take her kitchen from drab to fab, and created a stylish green kitchen. 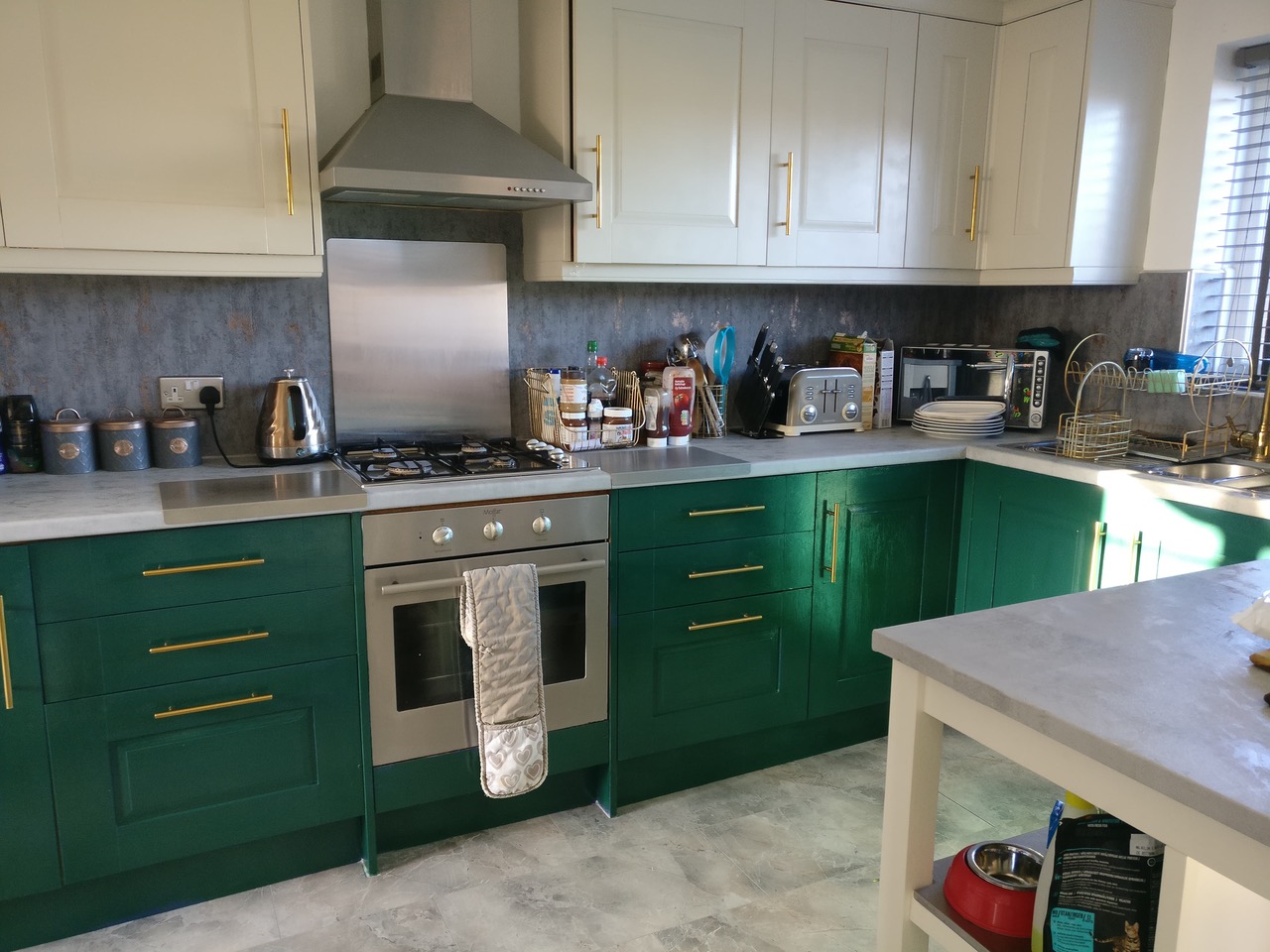 Jo told money-saving community LatestDeals.co.uk: "I got the idea of decorating my kitchen with two colours from watching TV makeover programmes.

"I didn't want to go all green as the kitchen is quite dark to begin with, plus we added a kitchen island that we bought from IKEA and the bottom of that was cream.

“We decided on the bottom half green and the top bit cream to interlink all the colours together without it being too overwhelming."

To learn how to undertake the transformation herself, Jo watched YouTube videos and sought advice on social media. 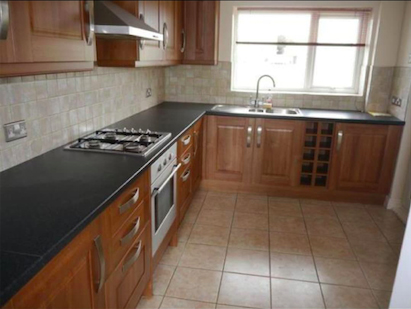 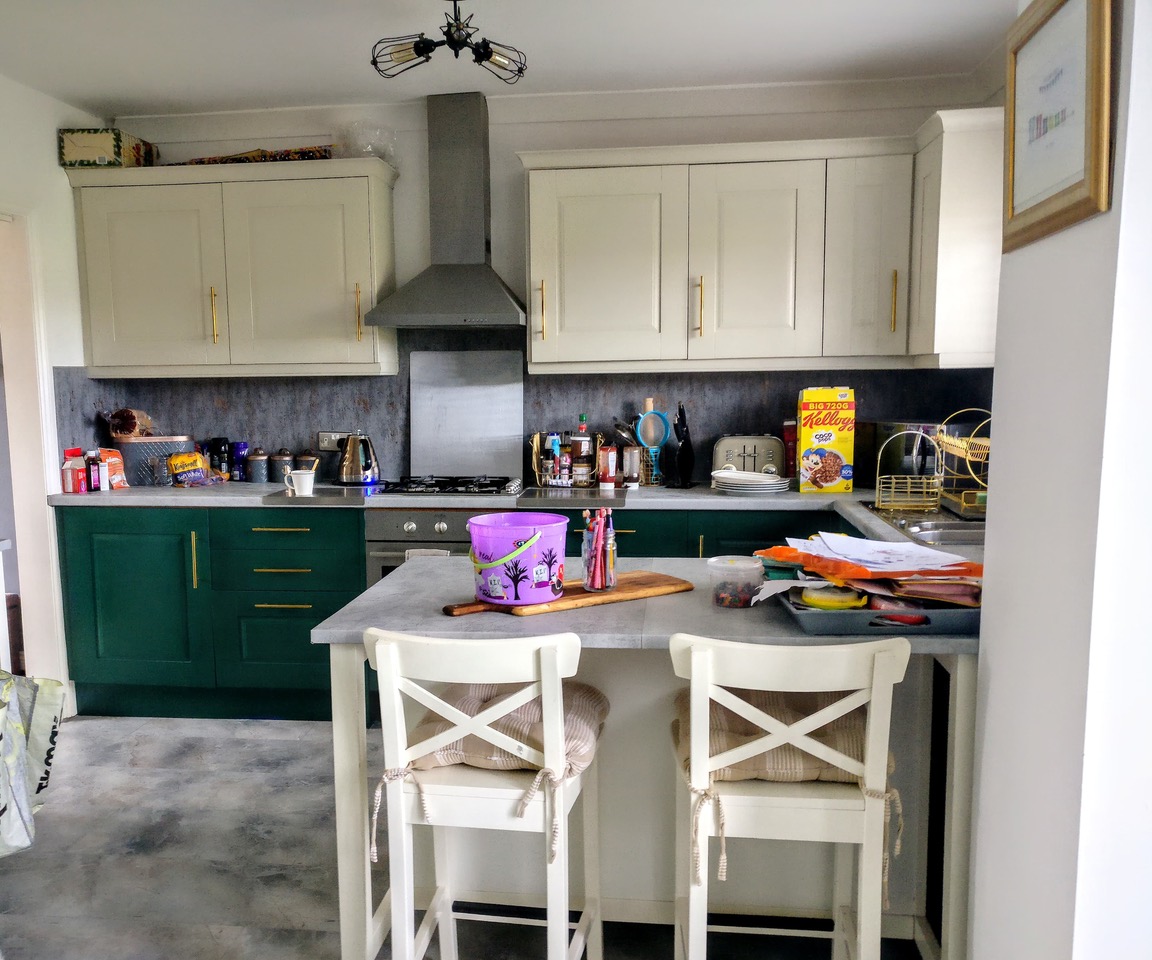 She added: “I joined DIY groups on Facebook and saw people using Fablon on their worktops, painting kitchen cupboards and changing handles.

"We recently had a house extension so when it was completed we couldn't afford a new kitchen.

“Instead, we used DC Fix Fablon in concrete grey from ebay (£35 for seven metres) for the worktops and use stainless steel chopping boards to protect the surface.

"I used V33 paint for the green cabinets and V33 cream paint for the top cabinets, and bought handles from eBay in gold to complete the look.” 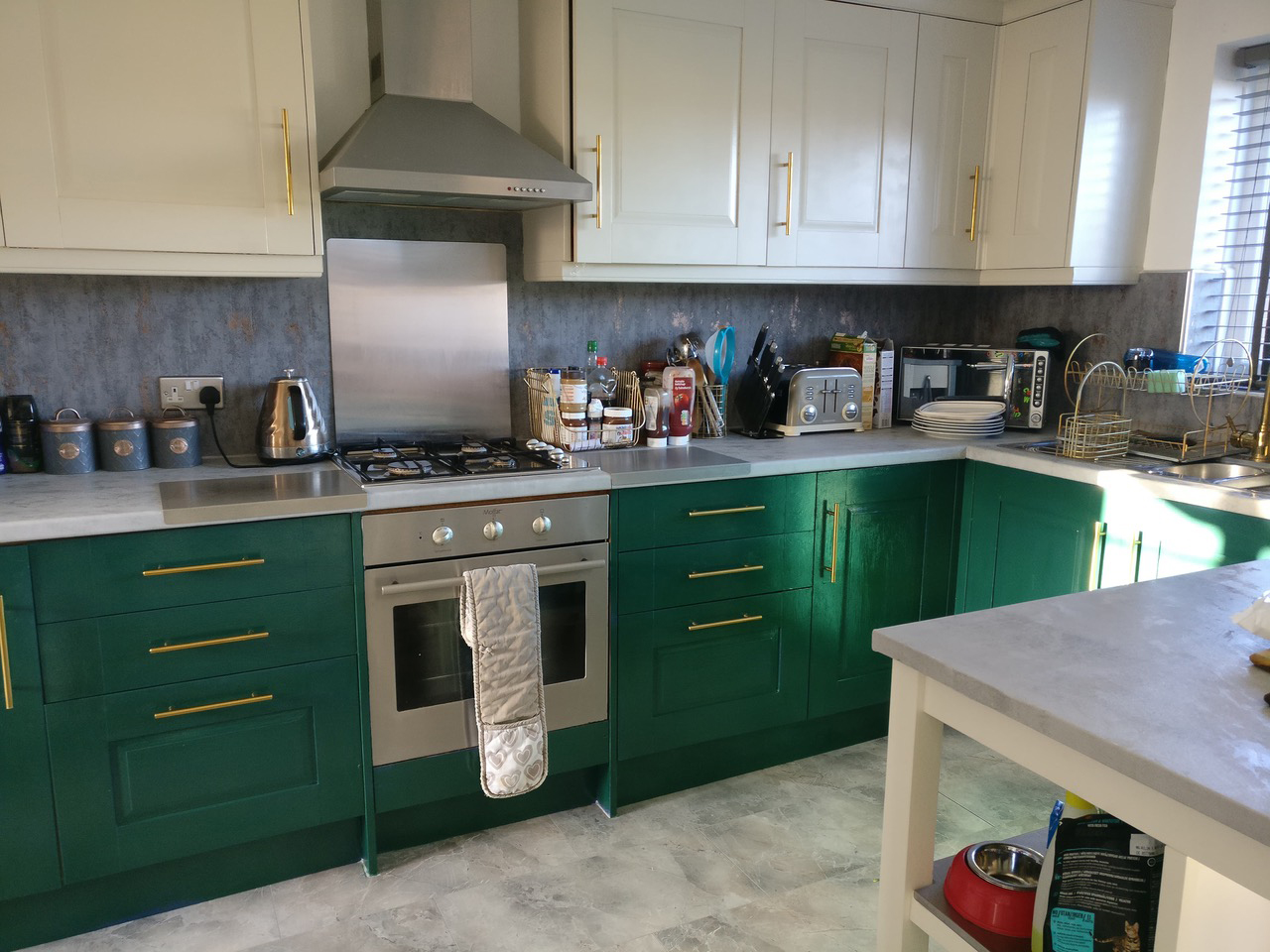 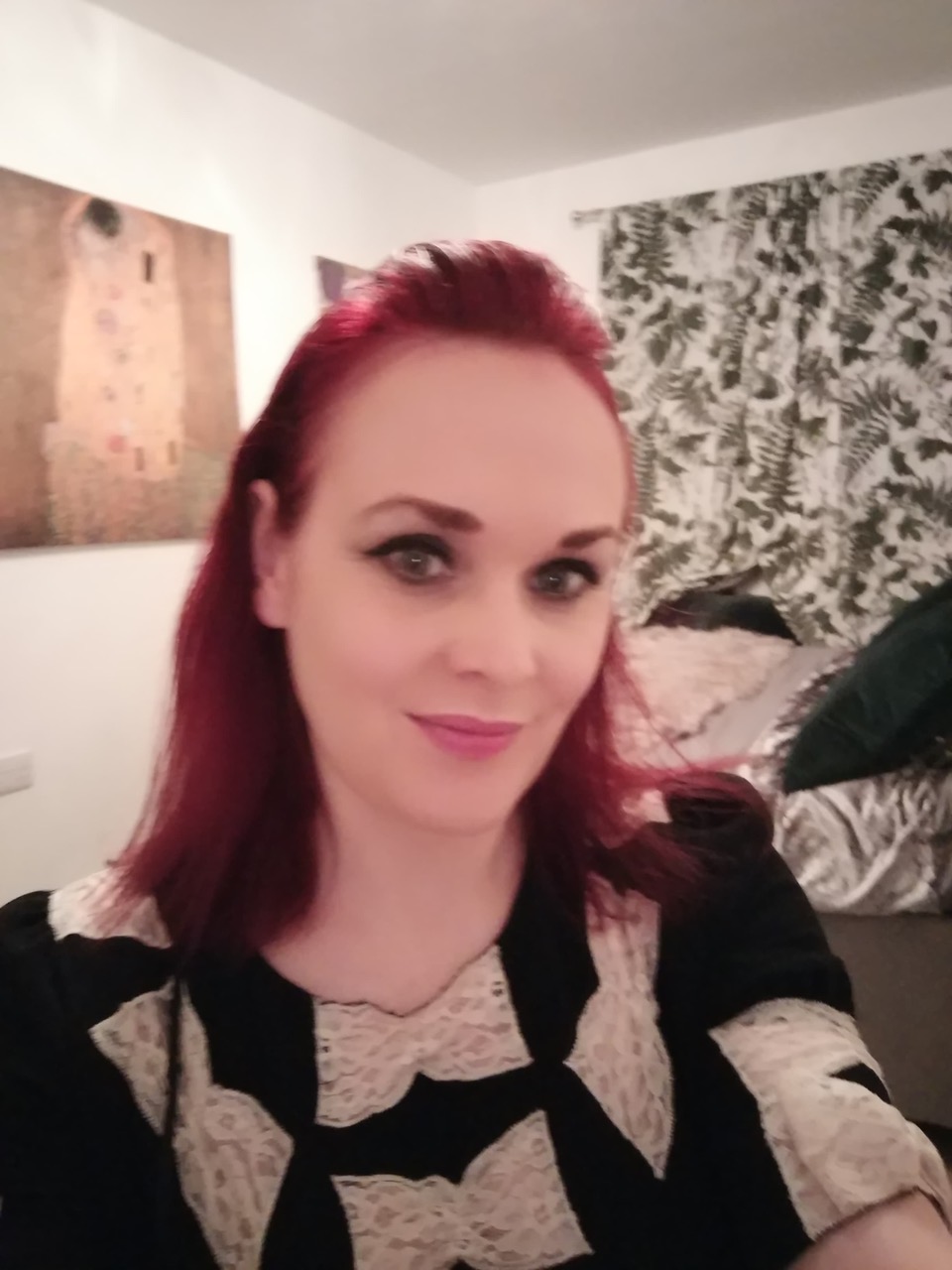 Jo revealed she used wallpaper over the tiles and it has proven to be very durable and has a good finish.

She added: "I also spray painted the dish rack and utensil containers in gold, the kitchen table was mahogany and was painted with grey furniture paint, and I bought chair covers from Amazon.

"I watched YouTube videos on applying the Fablon on the worktops and just read up on the best way to paint the kitchen units, taking off all the handles and doing one cupboard at a time.

“It took ages to actually finish – about two weeks as I could only paint on an evening when the kids were in bed and let it dry overnight."

Jo is delighted with how her new kitchen looks, not least because a new one would have been staggeringly expensive. 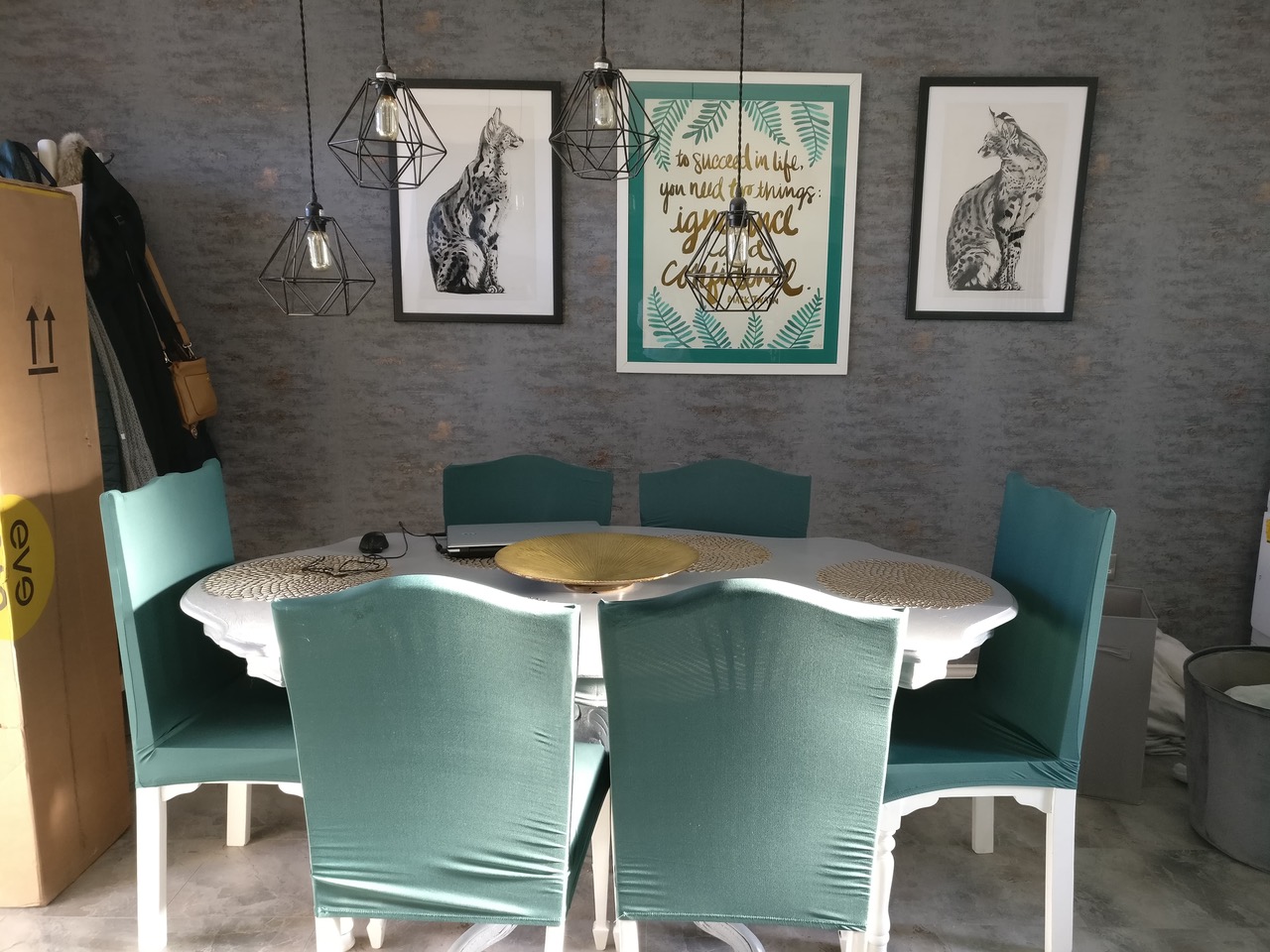 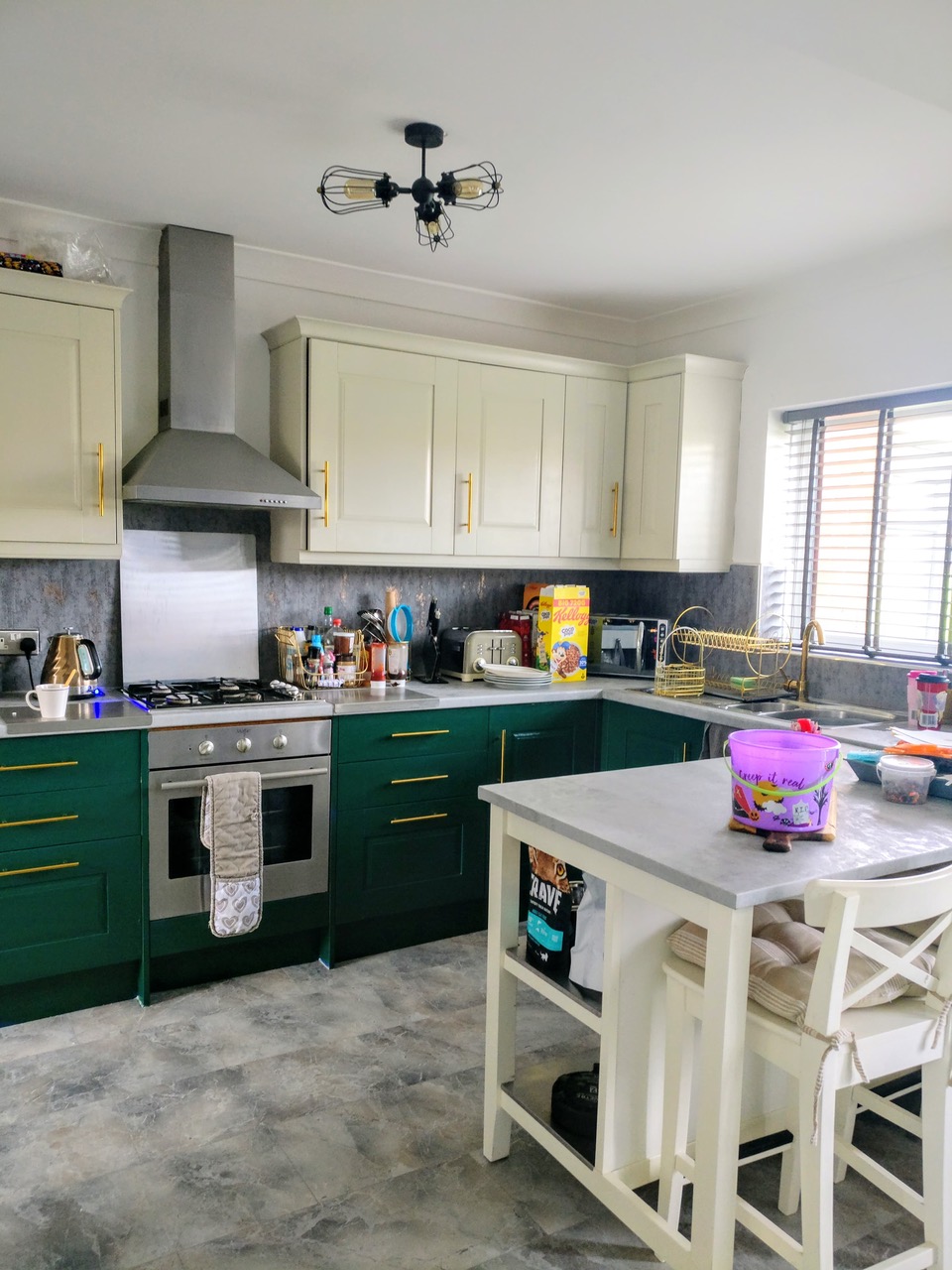 She’s now using her DIY prowess to transform the rest of her home.

Jo continued: "I think a whole new kitchen would have been around the £12,000 mark.

"I absolutely love the kitchen now! We still have to update a few bits like a new cooker and fridge freezer but I haven't seen anyone else with the same kind of look so I think it's unique.

“Eventually one day we might splash out on a new kitchen but so far I am pretty happy with the look of it and it saved thousands of pounds.

We shared how a mum transformed her dated, boring kitchen into a Mrs Hinch inspired space using B&Q paints.

n other DIY news, this mum transformed her son's bedroom into an incredible replica of a fire station.

We previously revealed how a mum made a magical Harry Potter bedroom for son with Gryffindor four poster bed after his older brother died.