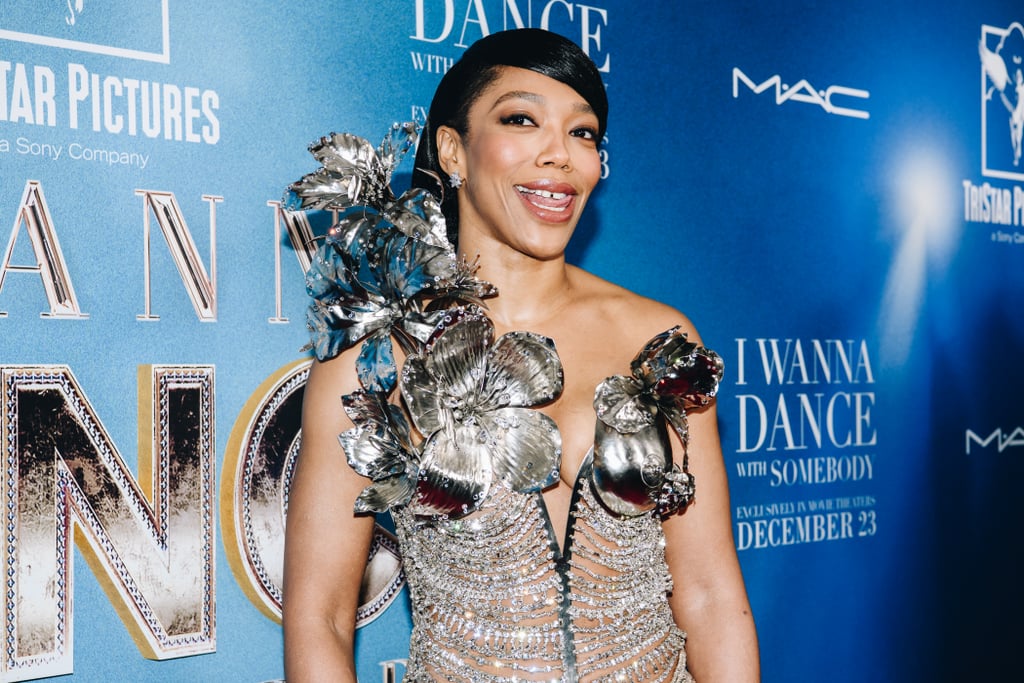 Naomi Ackie is ready to take center stage in Schiaparelli. Styled by Nicky Yates, the actor made a statement at the “I Wanna Dance With Somebody” premiere in New York on Dec. 13 in a crystal couture gown from the storied Parisian brand’s fall 2022 collection.

Schiaparelli is known for dramatic silhouettes and sculptural metallic detailing, and Ackie’s crystal plunge-neck gown took things up a notch. To construct the gown, designer and Creative Director Daniel Roseberry used over 21,950 Swarovski crystals and 212,500 silver glass bugle beads. In total, the piece took about 5,000 hours to complete, the brand wrote on Instagram.

The metal bodice featured a floral embellishment that stretched from her chest to the top of one of her shoulders, towering right beside her head. The spacing between the beading on the skirt created a sheer element to the dress and gave it some movement as Ackie mingled with her costars, including Stanley Tucci, Ashton Sanders, and Nafessa Williams.

In anticipation of the premiere, Ackie, who is the lead in the new Whitney Houston biopic, and her stylist spent months curating mood boards and inspiration. When the duo compared notes, they discovered they had both bookmarked the Schiaparelli dress. “I was talking to Nicky about the idea of liquid metal, because I was thinking about the ‘Queen of the Night’ look in ‘The Bodyguard,'” Ackie told Vogue. “It’s that balance of femininity and a kind of toughness too, especially with the flowers crafted from metal. It just felt very womanly and sexy, but also like being protected — a kind of armor.”

Protection is something that has come up a lot for Ackie while working on the upcoming film, both in protecting the legacy of Houston and protecting herself and her own talent so that she can do the part justice. The leading lady spoke up about placing metaphorical armor around the lofty role in an interview on “Live With Kelly and Ryan,” teasing the film’s nationwide release on Dec. 23.

Keep scrolling for a closer look at the dress with thousands of hours of hard work behind it.