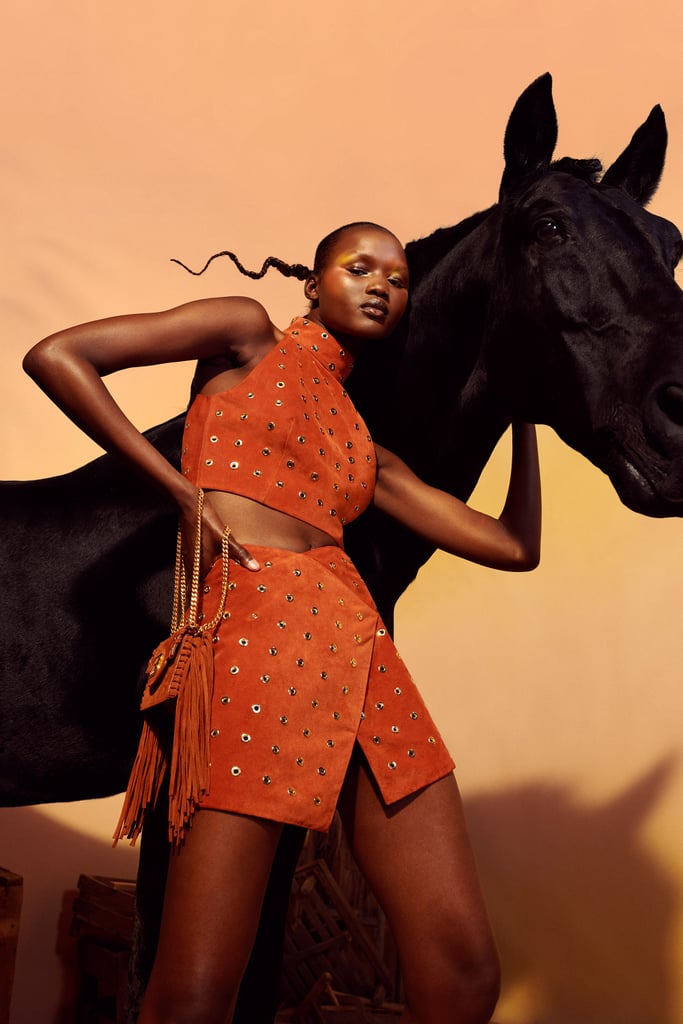 Someone call the sheriff, because our wallets are in extreme danger thanks to Balmain’s new The Harder They Fall capsule collection. Released on Nov. 3 to coincide with the film’s Netflix debut, the Western-inspired clothing and accessory line features upscale, ready-to-wear looks designed by Olivier Rousteing, including a scarf for $195 and an eyelet-detail, long-sleeved suede shift dress clocking in at a whopping $5,650. The prices may have our bank accounts shaking, but every look has us ready to hop on a horse and ride to the nearest saloon ASAP.

Can you imagine strutting up to the bar in that terracotta biker jacket or heading to the mall with that massive fringe maxi purse? The Old West aesthetic is alive and well, and we’re here for it. Our only question: do we pair everything with heels or cowboy boots?

Reflecting on his inspiration for the line, Olivier noted his lifelong love for Old Western films and called out the historical lack of representation in Western-inspired media. “[Western movies] focus on the same intriguing and universal messages, questions and themes that are found in the myths and stories that have been told all across the world, for thousands of years. That’s what’s behind their incredible, long-lasting power,” Olivier said. “Universal, yes, but at the same time, many of those famous movies were tragically limited by narrow-minded prejudices of the time . . . Those films, with their all-white casts, ignored an incredible history, where one third of American cowboys were Black — many of them newly freed slaves who had headed west in hopes of a better life.”

Channeling the same intensity and tenacious energy as the cast of The Harder They Fall, Olivier took his love for Western films and turned it into a collection that embodies the same power as some of the movie’s most badass characters. “I think that this capsule collection’s fringe-and-suede spirit will look just as at home when worn by Balmain Army members on the avenues of Paris as it would on Nat Love, Rufus Buck, Stagecoach Mary, and Trudy Smith in the beautiful open spaces of the American West,” he said.

Take a closer look at the limited-edition collection — including a sexy suede crop top and miniskirt set — ahead, and shop the full line on Balmain’s website, Farfetch, and the Netflix shop.