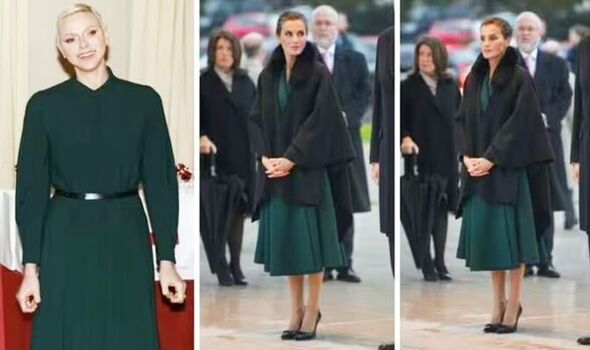 Queen Letizia and Princess Charlene are both huge royal style icons, and this week they seemed to have taken a leaf out of each other’s book when it comes to fashion. Both European royals stepped out on Wednesday – at different events – in uncannily similar outfits.

On November 16, Queen Letizia stepped out in Croatia for an official visit.

She opted for a flattering green coat dress – a common wardrobe staple for royal women – and a pair of black pumps.

The Spanish monarch has been spotted wearing the emerald piece before, having donned it for the Service Of Thanksgiving for Prince Philip’s memorial service in March.

The stunning dress is extremely flattering, with structured shoulders, a V-neckline and a cinched-in waist to create an hourglass illusion.

A velvet belt in a slightly darker shade of green further accentuates the waist and breaks up the emerald colour.

She held in her other hand a huge black umbrella, and draped a black cape over her shoulders.

This was the chic yet dramatic Fur-Trimmed Cape in Black by Carolina Herrera.

As for jewellery, the Queen kept this simple with a pair of elegant studs, the Jardin de aire Earrings by Gold & Roses Joyas.

This features both diamonds and emeralds, the latter which complemented Letizia’s coat dress perfectly.

But Queen Letizia was not the only royal who rocked an emerald gown this week.

For this festive occasion she opted for a Wool Mousseline Maxi Dress in Gallus Green from Akris.

It is described as follows: “This Akris maxi dress is crafted in light wool mousseline with stitched front pleats that flow into fringes.

“It features a shirt collar, covered button placket, and long sleeves for an elegant look that is perfect for the colder days of the year.”

The dress is a straight cut and doesn’t show off the figure, however the royal added a small black belt which nipped in her waist.

This accessory was the Leather Hip Belt in Black, also by Akris.

Interestingly, the dress featured lots of tassels which added dimension and texture to an otherwise simple garment.

Royal fans were unsurprisingly impressed by both royals’ choice of look.

Speaking about Princess Charlene, @plbatch56 stated: “Love everything about this dress, the boots are fabulous!” Fellow royal fan ale_campos_gua called Queen Letizia was “so regal!!!”.