The trends are clear on the runway at Afterpay Australian Fashion Week Australian because they’re the same ones we have seen in recent seasons, internationally and locally, some borrowed from The Row and Saint Laurent. 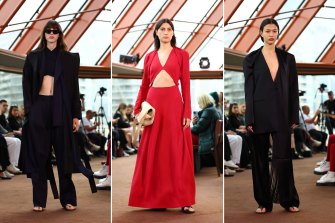 Oversized tailoring and cut outs. Classics with a twist and midriff from Charlotte Hicks, designer for Esse Studios at the Sydney Opera House.Credit:Getty

“It’s been a pretty good week so far, but it’s not revolutionary,” confirms Bridget Veals, David Jones general manager of womenswear. “One of the trends we have seen that is getting stronger is relaxed oversized tailoring, which is a commercial trend and great for us.”

“I think there’s a nod to classicism,” Hicks said backstage. “To me, it’s mixed with a true modernity – I think it is old and new.

Baby’s got back. Dresses with cut-outs at the front and back are shifting attention to a rearview at Esse Studios.Credit:Getty

“Ultimately it’s knowing who is going to wear it. If there’s a woman who wants to push it that little bit further, I can give it to her. If she wants it classic, we can do it. But perhaps she’s the same woman. Finding that sweet spot of subtle sophistication, playing with the shapes in interesting and subtle ways to create newness is the challenge.”

Hicks pushed her ladylike sensibilities further with a generous expanse of midriff beneath a halter-neck bandeau top and dresses scooped increasingly low at the back.

“The bare back has replaced the midriff,” Veals says, having appreciated Michael Lo Sordo’s bejewelled approach yesterday and preparing to bring his label into the David Jones stable, alongside Beare Park.

Red carpet veteran Mariam Seddiq, managed to tick almost every international trend off her long list in a comprehensive show that offered a unique take on Valentino’s pink suit, Saint Laurent’s Le Smoking and a crumpled approach to Loewe’s gold breastplate. At times the execution had trouble keeping up with the torrent of ideas but Seddiq struck nuggets of gold by casting her net wide.

Exposed backs, cut-outs, midriffs, puffy sleeves and sequinned mini-skirts were all part of Aje’s extensive repertoire, shown at the Museum of Contemporary Art. Everything was familiar, with some pieces having been revived from the labels’ archives, but they reemerged more polished than front row guest Julie Bishop’s dazzling Margot McKinney coloured stone earrings. 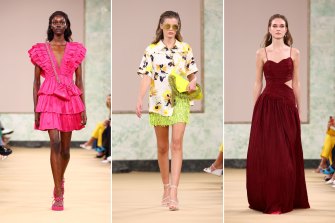 “We were conscious that we are known for such signature things, but you have to be known for more than one,” label co-creative director Adrian Norris said after the show. “We were looking at different ways to interpret Aje volume through examples of sculpture. There’s always a move on, so we introduced draping and brought back heritage pieces, such as the mini-skirt, which we sold a million of when we first launched about 15 years ago.”

Despite the greatest hits approach to keep fans happy, with a few new singles ready to rocket to the top of the checkout, the old classics were played with a more professional approach to fabrication with flawless sequin details and perfectly proportioned prints.

Along with bared backs, the pelvic bone continues to challenge clavicles and cleavage for attention, having jutted forth at Bec & Bridge, Aaizel and Karla Spetic.

“I think it’s a different kind of sexy,” said Matteau designer Ilona Hamer. Model and influencer Christian Wilkins sees it as a fresh expression of the ’90s and ’00s for those who didn’t experience it the first time. “A lot of it was originally worn by celebrities who didn’t eat, so hopefully we have moved forward enough to approach it with some body positivity, which is very much a part of today’s fashion landscape.”

For Bec & Bridge designers Becky Cooper and Bridget Yorston it’s something for the woman.

“It’s definitely coming back,” Cooper said of the bare hip. “We’ve done high-waisted for so long that it’s time for a change.” 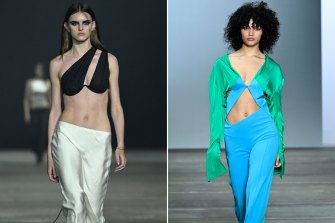 “This is grungy and effortless,” Yorston said, “You have those contradictions with the toughness and sensuality.”

Just think of all the effort you will save from having to pick out underwear.