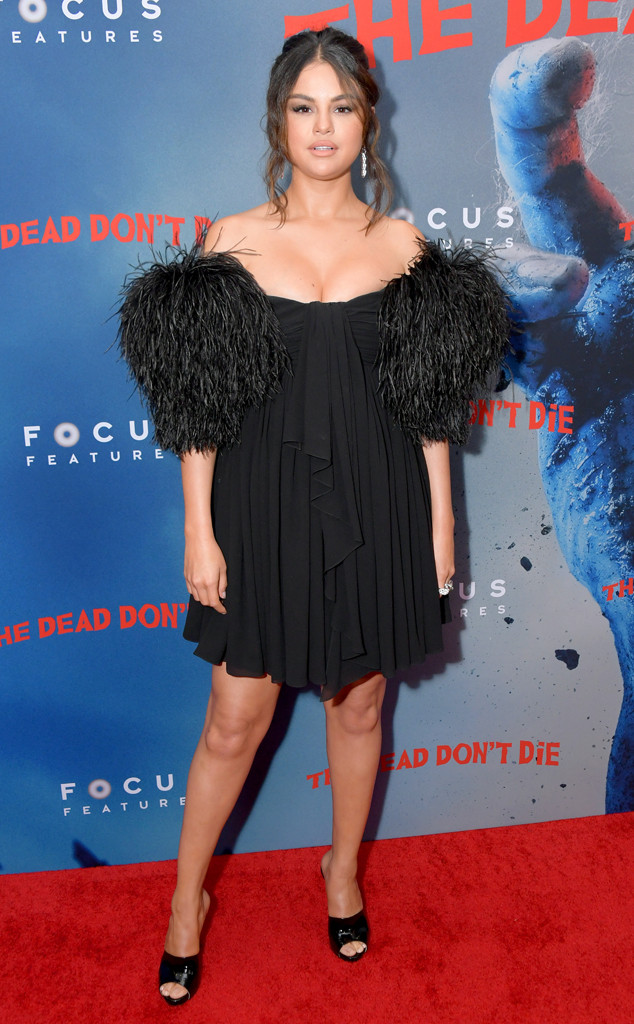 Selena Gomez is taking on the Big Apple, and with major style!

Attending the New York City premiere of her latest movie, The Dead Don’t Die, the 26-year-old star is bringing the glitz and the glamour to the star-studded event. Sashaying along the red carpet with her co-stars Adam Driver and Chloe Sevigny, the brunette beauty showed off her larger-than-life ensemble. Wearing a $16,000 Celine mini dress, which featured billowing feather straps, Gomez was ready to shimmy the night away.

In fact, that’s what she did right before the star-studded event.

From her glam team’s Instagram videos, the “Fetish” singer showed off her feathery dress with a cute little shimmy. “I’m going to my movie premiere,” she said with a little laugh. When it came to styling, the 26-year-old actress enlisted none other than Kate Young, who recently dressed her during the 2019 Cannes Film Festival,  We Day and The Hollywood Reporter‘s Empowerment in Entertainment.

Marissa Marino is the mastermind behind Sel’s loose wave updo, while Tom Bachik painted her claws a sheer nude. All in all, the focus was on her little black dress.

As of late, the brunette beauty has been appearing at more events after taking year-long a break from the spotlight due to mental and physical health issues. But despite her recent outings, she’s still cautious and picky about what she shares online.

“I would say for my generation, specifically, social media has really been terrible,” she said during a press conference at this year’s Cannes Film Festival, per Variety. “It does scare me when you see how exposed these young boys and young girls are. They are not aware of the news. I think it’s dangerous for sure. I don’t think people are getting the right information sometimes.”

When it comes to what she posts on social media, she said she wants “to be intentional with it.”

“It just scares me. I’ll see these young girls at meet and greets. They are devastated, dealing with bullying and not being able to have their own voice. It can be great in moments. I would be careful and allow yourself some time limits of when you should use it.”

It’s good to see the “Same Old Love” star back in the limelight… with attitude, style and purpose, no less!