Men are often the silent victims of ageism in fashion but with his red carpet Grammys outfit musician Lenny Kravitz spoke up, offering an alternative to tucking your Seniors Card into a puffy vest, worn over a navy jumper, check shirt and corduroy trousers.

In skintight Saint Laurent leather pants and a chain mail top from designer Natalia Fedner, who has dressed Beyonce, Shakira and Doja Cat, the 57-year-old exuded greater sex appeal than the combined forces of 28-year-old Justin Bieber in an oversized Balenciaga suit and 25-year-old BTS member V in a Louis Vuitton suit with cascading corsage. 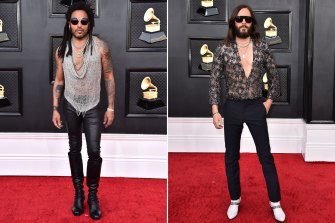 Are you going to go their way? Lenny Kravitz (57) and Jared Leto (50) bring sex to seniors dressing at the Grammys.Credit:AP

Equally at ease with showing moisturised skin on the red carpet was 50-year-old House Of Gucci actor Jared Leto, wearing an embellished metallic top from Gucci with a plunging neckline, showcasing a toned chest and layered necklaces.

Like their female equivalents Helen Mirren, 76, Jane Fonda, 84, and Sandra Bullock, 57, both celebrities are gifted with trim figures that can accommodate sample-sized requests from stylists but Nicholas Huxley, the 67-year-old former head of the TAFE NSW Fashion Design Studio, says dressing up on the other side of 50 is as much about attitude as a commitment to aerobics.

“I can never understand why men of a certain age feel as though they have to look conservative and businesslike,” Huxley says. “I’m convinced that they’re worried about being thought of as mutton dressed up as SPAM but to me, they’re missing out on all the fun of fashion.” 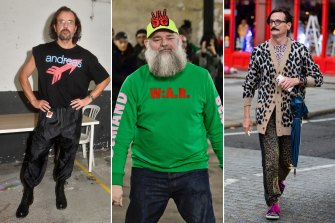 “I’m not doing it to try and generate comment, like men in dresses for shock value or Justin Bieber in his oversized suit. I’m dressing to express my attitude. For me, it’s about feeling confident, expressing yourself and not being afraid of what people think. I’m getting ready to turn 68, so I want to dress the way that I want.”

The fashion world is filled with inspiration for men who prefer to flaunt, rather than hide dad – and grandad-bods. Vivienne Westwood’s husband Andreas Kronthaler, 56, is the creative director of her sex-infused label, and looks at ease in ripped T-shirts, parachute pants and combat boots.

Kronthaler appreciates the power of a conservative pinstriped suit, but his approach to corporate dressing offers inspiration for those wishing to stand out in bland boardrooms. 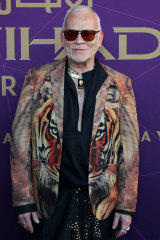 “If I wear a suit, I like to wear it the way I like to wear it,” he told British GQ. “Of course, I can wear it very strict and very formal, but I’m not so interested in that because I think it’s a bit like a uniform. I like to break it up. If I take a navy-blue jacket, I take another pair of navy-blue trousers from a different suit.”

“If you only make things in black, and you only go for ‘serious’ clothes, you’re much easier understood,” Van Beirendock said in an interview. “And of course, that’s a skill. But humour is also a skill.”

Huxley sees dressing with personal flair as a way to combat the invisibility that can come with ageing in a youth-obsessed industry.

“People can get paranoid as they get older and their way of dressing shows a lack of confidence,” Huxley says. “They wear black so that they don’t stand out or dress in outfits that say ‘I don’t want to be looked out.’ They should just take a look at Lenny Kravitz. We all have an inner rock star.”