Ann Becnel, a dog trainer in New Orleans, is busier than ever these days.

“I am getting so many requests for training that I can barely keep up,” said Ms. Becnel, who got into the business 35 years ago. “It’s overwhelming.”

April Chillari, the owner of Core Canine in Northern Virginia, is in a similar position. “Prior to the pandemic I would book up three to five weeks in advance,” she said. “Now I have a 10-week waiting list.”

Dog trainers are in high demand, thanks to a boom in adoptions from shelters and sales from breeders, spurred last spring by widespread work-from-home policies and profound social isolation. Approximately 12.6 million households took in pets between March and December, according to the American Pet Products Association.

In just the first month of the pandemic, Petfinder.com saw more than twice as many adoption inquiries as in the previous four weeks, and anyone who tried to foster a dog in the spring or summer knows how competitive it was.

Many new dog owners and foster caretakers have found that the pets complement their homebound lifestyles. Before the pandemic, they would have needed to hire daytime walkers or find pet-friendly workplaces. Under current circumstances, they are getting time to bond, and the dogs are helping to ensure that their humans get outside at least a few times a day.

Of course, the relationship is not always so symbiotic. Training a dog takes work — more work than most people expect. Which is why many of them are calling in the professionals for help. 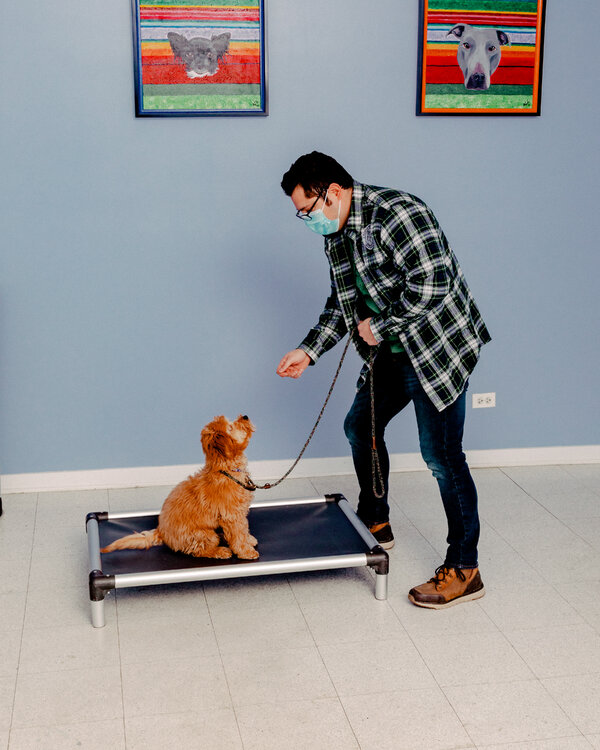 Danene Brown and Darryl Powell thought adding a third dog to their home in Richmond, Va., would be easy; the first two were a cinch to train. But when the couple picked up Hopper, a French bulldog puppy, last February, that assumption was almost immediately challenged.

“The pandemic made it nearly impossible to socialize him,” said Ms. Brown, a physical therapist, and Hopper developed a “Napoleon complex.” “Any time that we would try to introduce him to another dog on a walk, he was aggressive and protective of us and didn’t know how to play well with others,” she said.

Ms. Brown and Mr. Powell met with Melanie Benware, a local trainer and the president of the International Association of Canine Professionals. “People are going out less,” Ms. Benware said, “therefore their dogs are not being exposed to as many people, dogs, sights and sounds.” She taught the couple how to train Hopper to respond calmly to other dogs. “He’s gotten better, but he’s still a work in progress,” Ms. Brown said.

The issue of limited social interaction is pervasive right now. “I find that my clients are struggling to find socialization opportunities for their puppies,” said Kim Roche, a dog trainer and behavioral consultant in Austin, Texas. “The length of a standard leash is exactly six feet, and this discourages Covid-cautious people from allowing their puppies to greet strangers in public places.” Ms. Benware recommends buying a 20-foot leash for this very purpose.

Other puppy-specific problems have emerged. “It’s difficult to pay attention to a Zoom meeting when there is a puppy trying to climb into one’s lap,” Ms. Roche said. She teaches puppies to retreat to a designated place on command — say, an exercise pen, a mat or a bed — where they can settle down with a toy.

Crate training is key, too, said Jesus San Miguel, the owner of Canine Perspective, Inc., in Chicago. “Owners are not utilizing a kennel, thinking since they’re home all the time it’s not needed, but it is critical to both the potty training process and for the puppy to have a safe space when left unattended,” he said.

Finally, it’s important to make sure puppies get enough sleep: 18 to 20 hours, according to Ms. Chillari. “Puppies get grumpier when they’re tired, just like children, and I think people assume the training isn’t working because the puppies really just need to sleep,” she said.

The Downside of All That Bonding Time

It’s not just puppies, though. Pets of all ages have become far more aware of their owners’ presence — and absence — these days. Mark Forrest Patrick, a dog trainer in Rochester, N.Y., said he’s seen a number of dogs who joined homes at the beginning of the pandemic and have since developed separation anxiety. They have become so attached to their owners that they show distress and anxiety when left alone.

“Because people are at home more, they’re not leaving their dogs alone, and dogs aren’t learning how to be independent,” Ms. Chillari said. “That’s a problem, because the reality is when life gets back to normal, you’re going to be spending time away from your dog, and your dog needs to learn that you aren’t going to be there all the time.”

There are steps that owners can take to address and even prevent separation anxiety. Ms. Roche, a trainer who specializes in separation anxiety, recommends gradual exposure therapy. “You don’t want to start off by leaving your puppy alone for two hours,” she said. “You could start with leaving your dog alone for 30 seconds, and then increase the interval based on how well your dog is doing.”

Monitoring the dog’s behavior during these times is crucial, Ms. Roche said, especially if one has already observed signs of separation anxiety. She suggests setting up a camera that feeds video to a smartphone app, the way modern baby monitors do.

“My business has changed drastically,” Ms. Roche said. “I used to do a lot of group classes, and now I’ve discontinued those completely.”

Being able to train dogs over Zoom has enabled some trainers to expand their business. “It’s amazing that I now have clients in California, Florida and Kansas City, who just found me online,” said Mr. Patrick, who is also the board chair for the Association of Professional Dog Trainers.

Ms. Chillari also charges less for virtual training, but she said she prefers doing in-person sessions. “When I meet with dog owners, I teach them how to make adjustments to their behavior, and that’s harder to do over Zoom,” she said.

Many dog trainers have resumed in-person sessions but have modified their routines. Some offer no-contact training, where they give the dog owners instructions while wearing masks and staying six feet apart — allowing owners to take a more hands-on role in training their pet.

That’s how Melissa and Drew Herman trained Nash, their 4-year-old, 70-pound Aussimo (an Australian cattle dog and American Eskimo mix), when the couple met last April with Mr. San Miguel in Chicago. “Nash had broken my husband’s shoulder when he yanked hard on his leash while on a walk,” said Ms. Herman, an executive assistant at a management consulting firm in Chicago.

In a six-week obedience training course with Mr. San Miguel, Nash learned how to walk calmly on a leash and follow basic commands. “It’s changed our lives,” Ms. Herman said. “We can even let Nash off his leash when we’re at the dog park, and other owners have complimented us on how well trained he is.”