Perhaps no other motif in fashion is as divisive as the bow. Some bows suggest saccharine girlishness, some prim prep style, but regardless of the implications, the bow is a silhouette that carries reams of symbolism and always inspires a strong reaction.

But why has the spring 2022 runway season embraced the humble bow? As some might say, unusual times call for bold fashion, and our uncertain times have us craving the comfort of familiarity. Giambattista Valli, Moschino, Rochas, Batsheva, Comme des Garçons, Richard Quinn, and many more designers showcased the bow for the upcoming season, all in different iterations. And emerging brands have been welcoming the bow with open arms too. 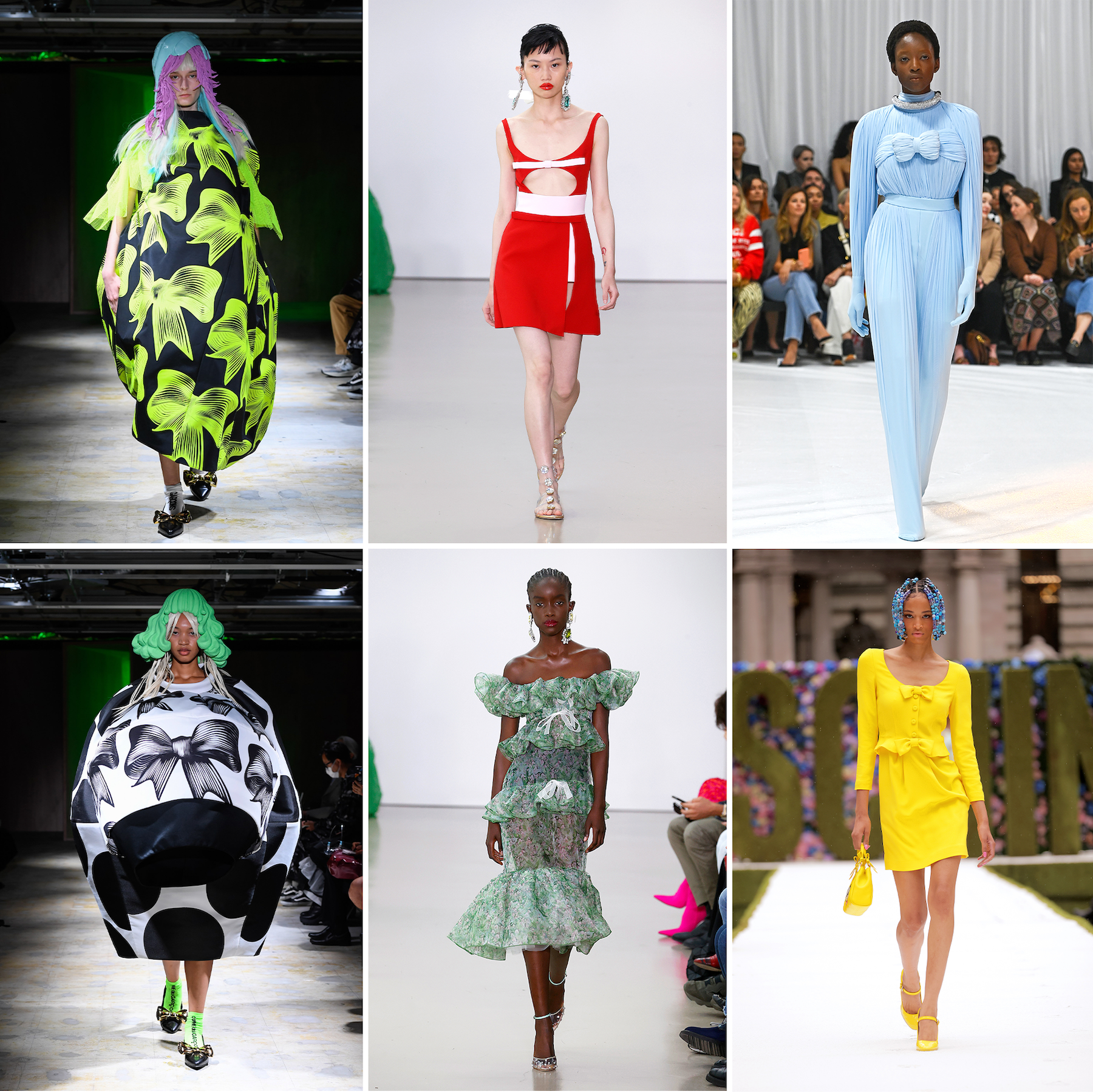 “​​Ribbons and bows make me think of the main characters from books and movies that I always loved growing up,” Shelly Horst, the designer behind the Philadelphia-based accessories brand Room Shop, explains. The label recently launched supersized ribbons that tie into bows, and Horst has been styling them ever so dramatically in low ponytails and buns. “In stories like Anne of Green Gables or Little House on the Prairie, a hair ribbon was always a very special and expensive accessory, often made of the finest silk and in the most beautiful colors. I love how a bow can be used to pull an outfit together.”

Likewise, Shanghai-based womenswear label Shushu/Tong has made the bow a major part of its brand identity, with bow-embellished dresses, bow bandeau tops that stand on their own, and even strapless dresses with enormous bows in the back. Designers Liushu Lei and Yutong Jiang take inspiration “from Japanese animation,” Lei says, adding, “The bow is powerful.” Powerhouse brands like Miu Miu and Chanel place bows over and over again on shoes, in hair accessories, through jewelry, and on glitzy dresses, making it modern to wear the bow.

The bow itself dates all the way back to ancient times. A set of Sumerian hair ribbons made of gold from 2600 to 2500 BC can be found at The Metropolitan Museum of Art. But “bows as we think of them today came around the Middle Ages with the introduction of the ribbon, made possible with the invention of the horizontal loom,” Sarah Collins, a professor of fashion at Savannah College of Art and Design, explains.

In the 16th and 17th centuries, the bow as we’re more familiar with it, became popular for all genders, worn in the hair. “Wearing a bow tied to a long lock of hair was called a ‘love lock’; the lock of hair was usually grown out longer than the remainder of the hair, then braided and laid upon the chest, and tied with a bow,” Collins adds. The bow in turn represented romance, since it was close to the heart. 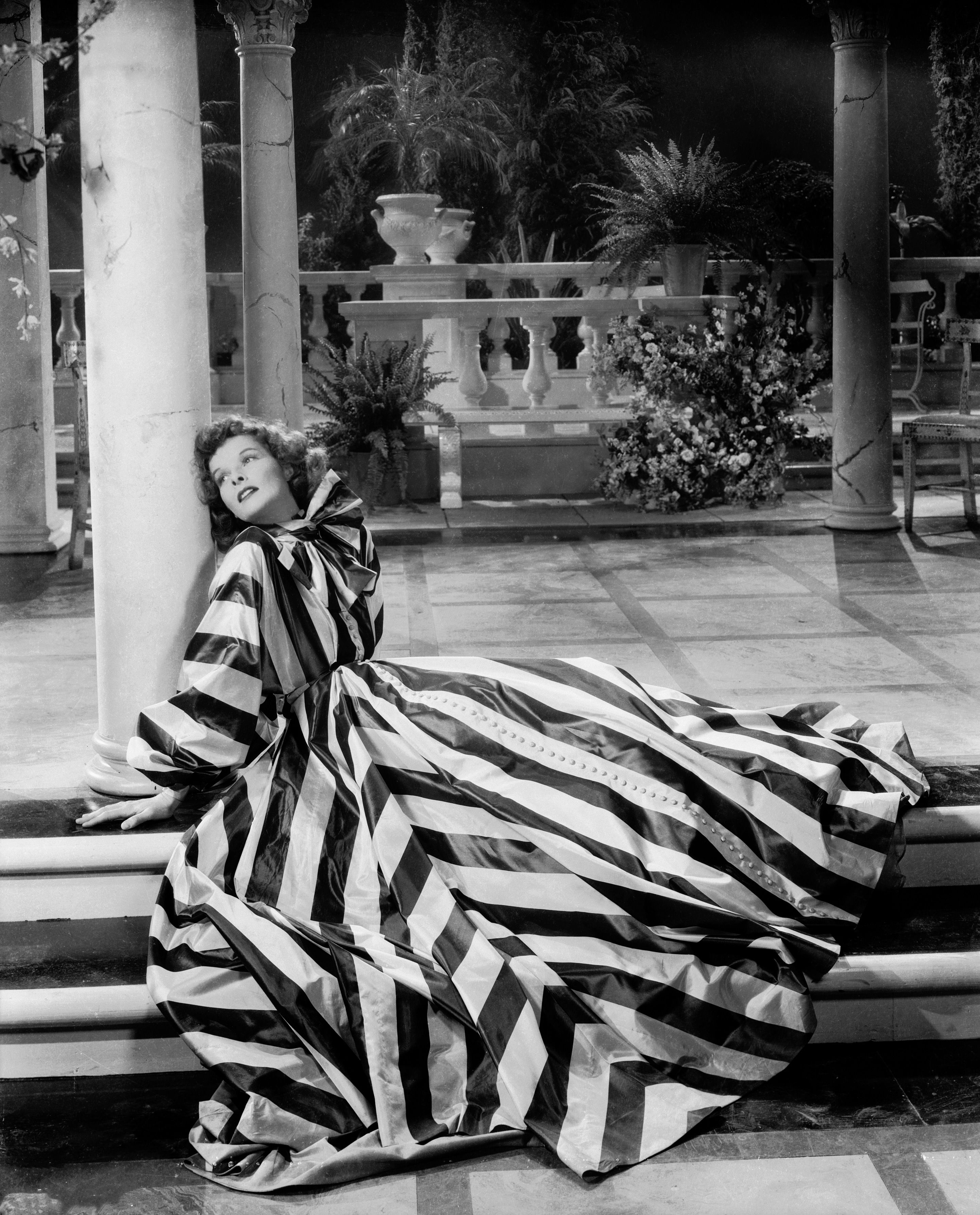 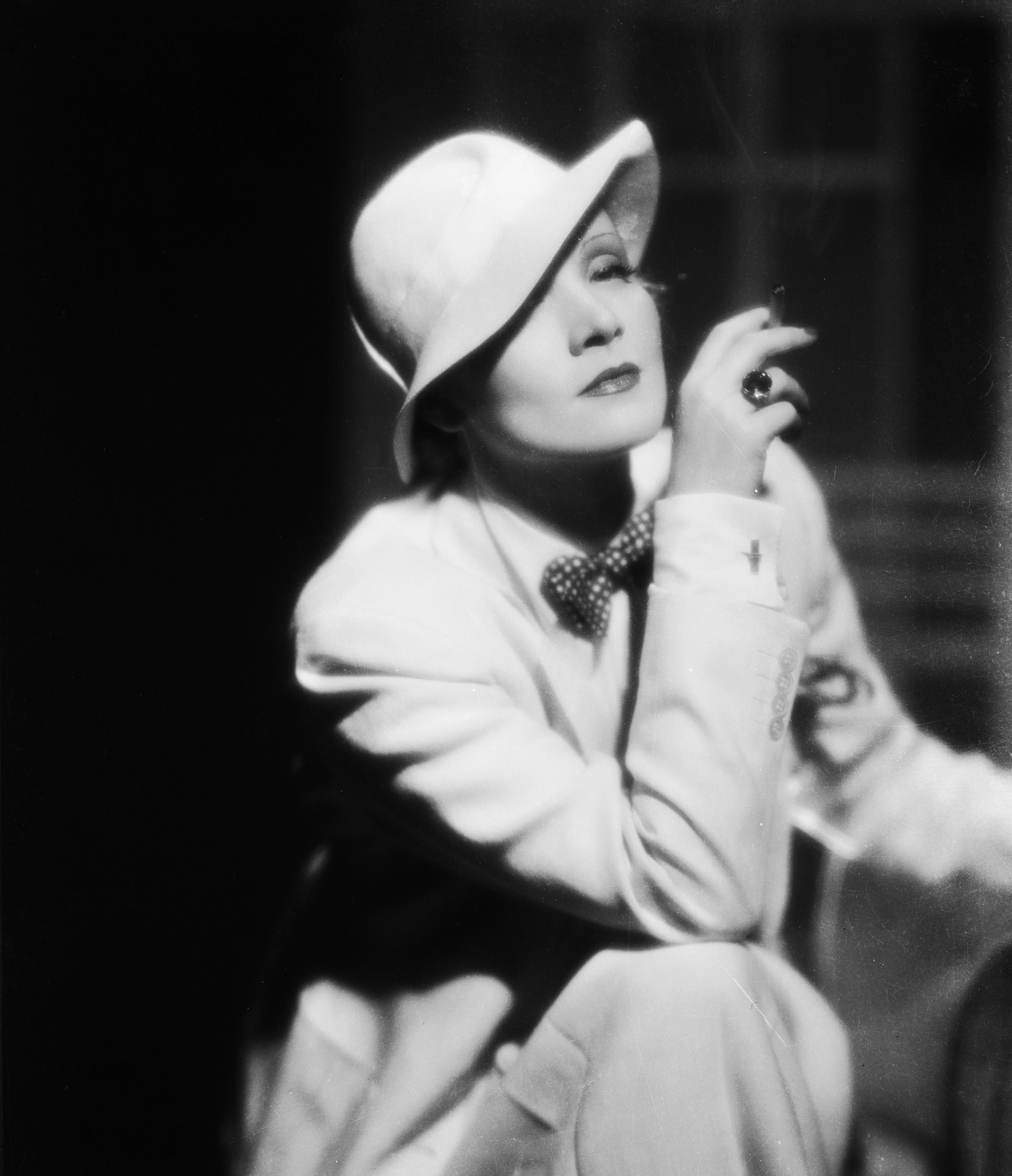 But even today, the bow has a major presence on all genders. Take, for example, the bow tie, which most people accredit to Pierre Lorillard. In 1886, he designed the modern tuxedo and bow as we know it, with a black bow tie. Since then, men have been wearing the style in a multitude of iterations. The bow tie itself even crossed over to womenswear for a brief moment in the 1920s and 1930s, courtesy of Katharine Hepburn and Marlene Dietrich. When the famed designer Elsa Schiaparelli launched her knitwear collection in 1927, she celebrated the bow with a trompe l’oeil re-creation of it knitted into the neckline of a sweater.

Likewise, the bow was used as a hair accessory among the French aristocracy of the 18th century. Rumor has it, the Marquise de Fontange, a mistress of Louis XIV, started the trend. She reportedly lost her hat while riding a horse. Since it was considered risqué to have loose hair, she pulled a ribbon off her dress to tie up her locks. From there, the trend took off. Marie Antoinette’s hairdresser, for example, allegedly spent roughly 20,000 francs on her hair ribbons. 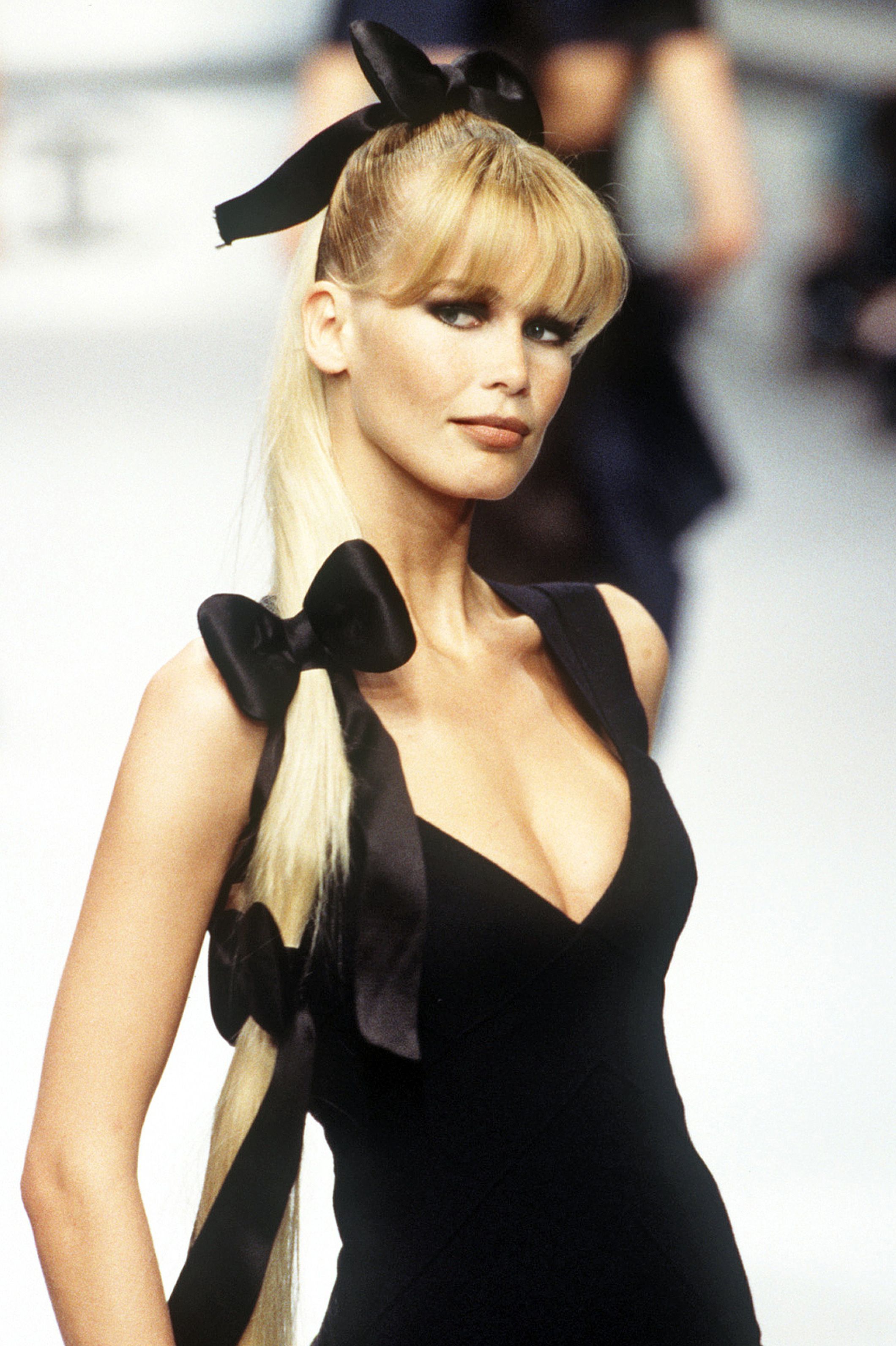 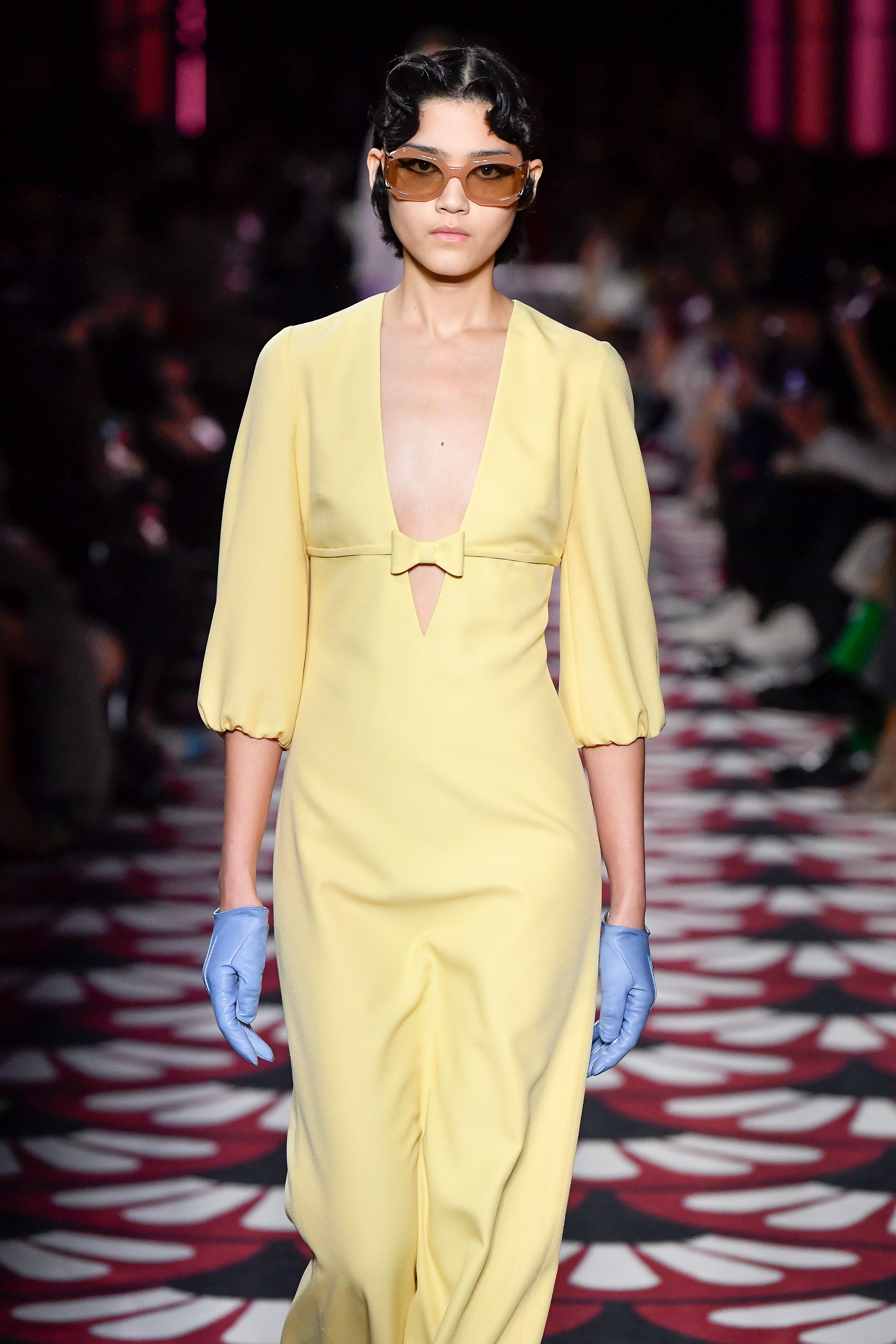 With the cottagecore subculture taking over TikTok last year and royalcore and lovecore aesthetics thriving today, it’s no wonder designers are taking inspiration from the Marie Antoinette look. Take, for instance, Instagram sensation Selkie, which recently launched its Petit Trianon collection replete with bows everywhere, including on the arms of the garments and at the centers of low-plunging necklines, inspired by Antoinette’s billowing gowns. 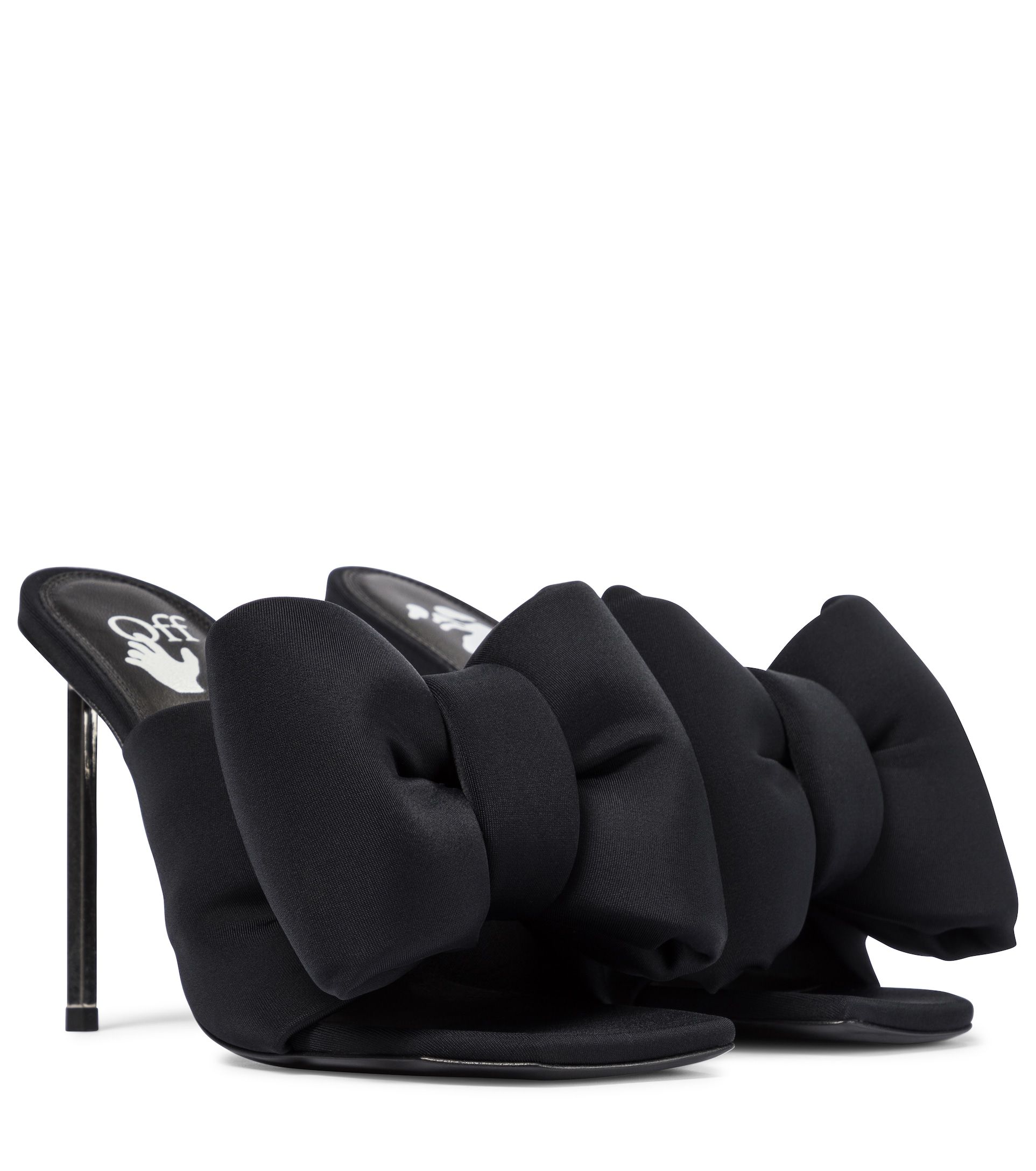 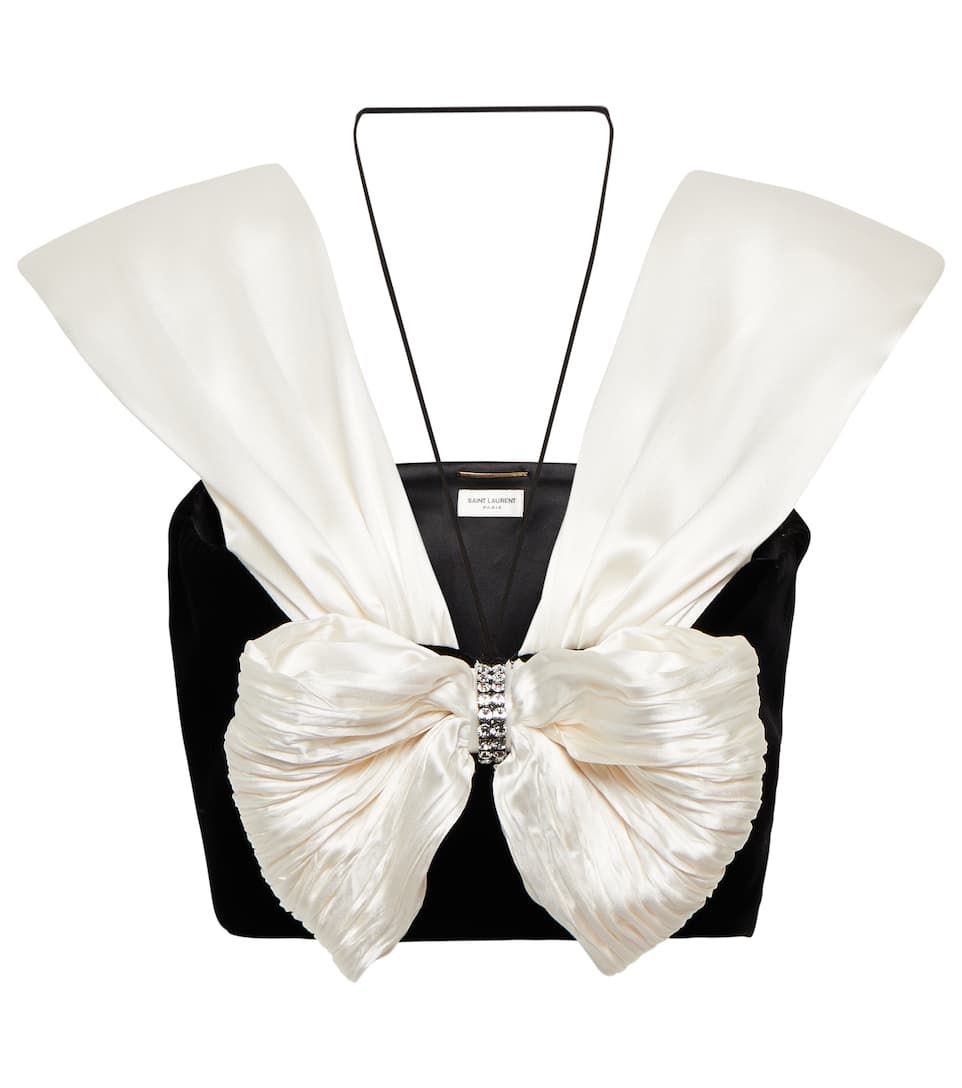 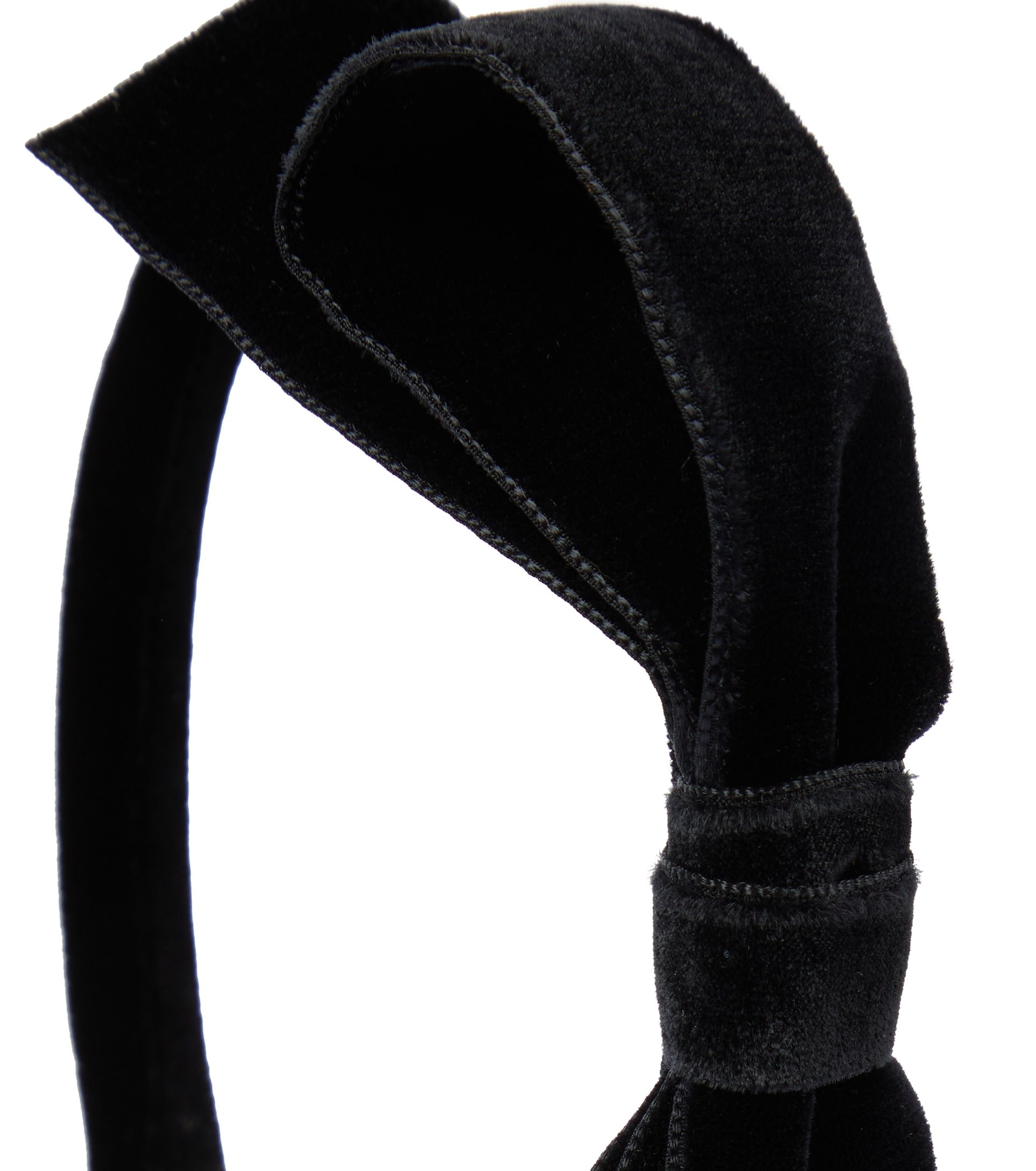 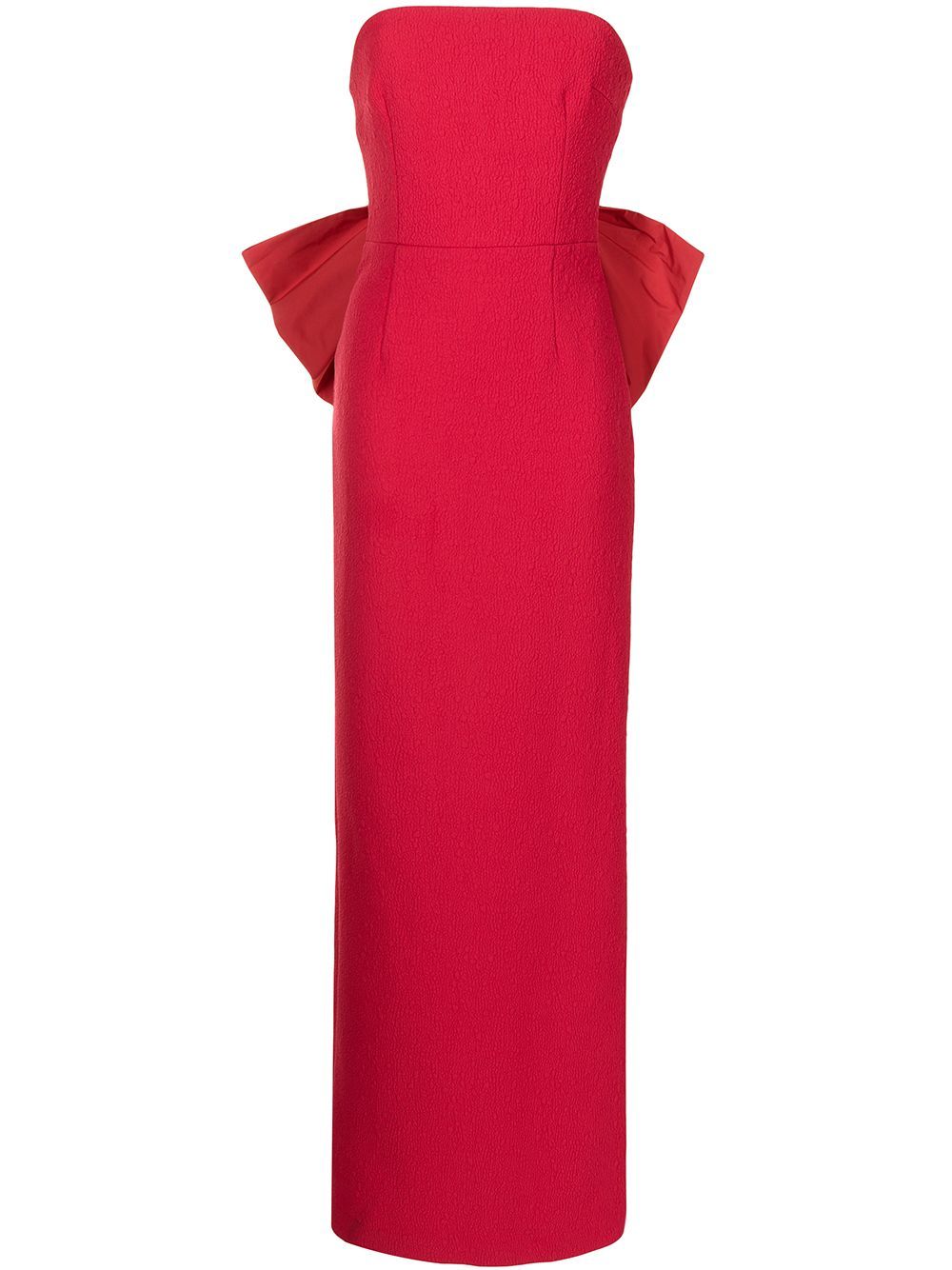 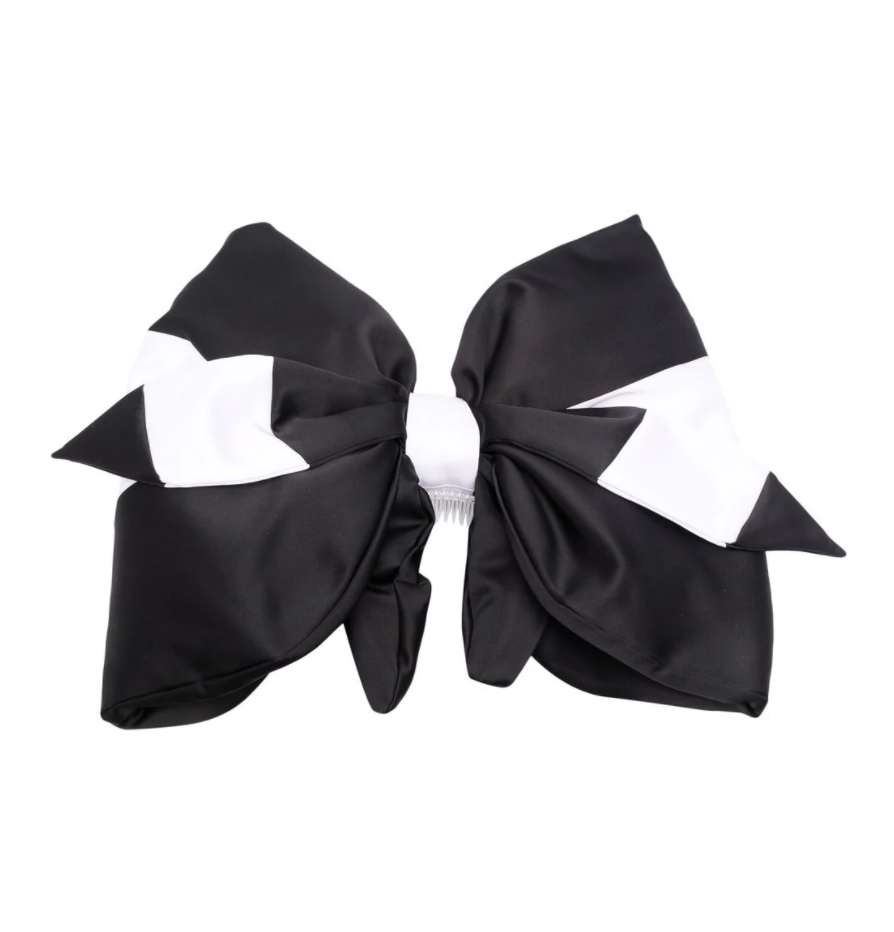 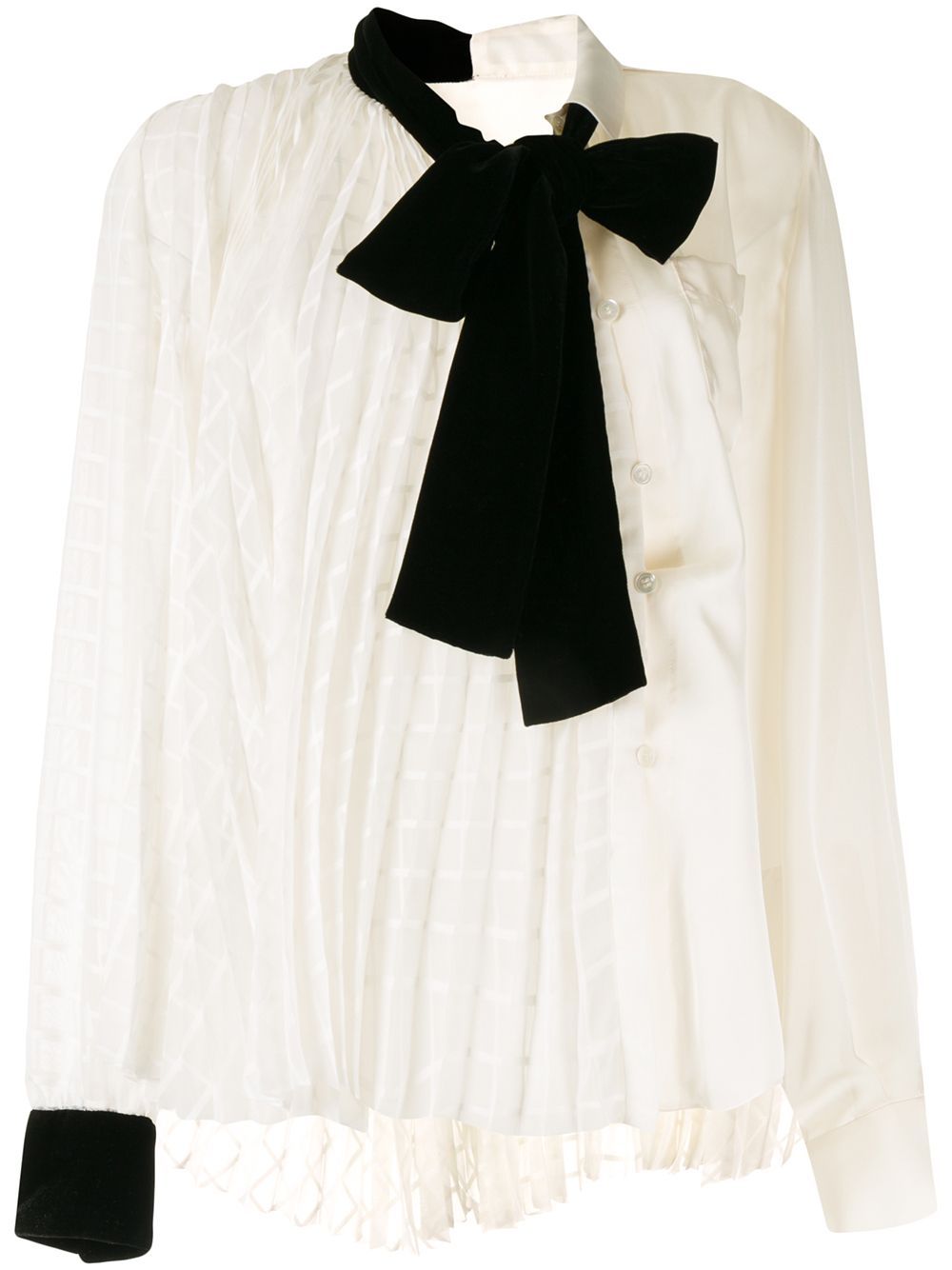 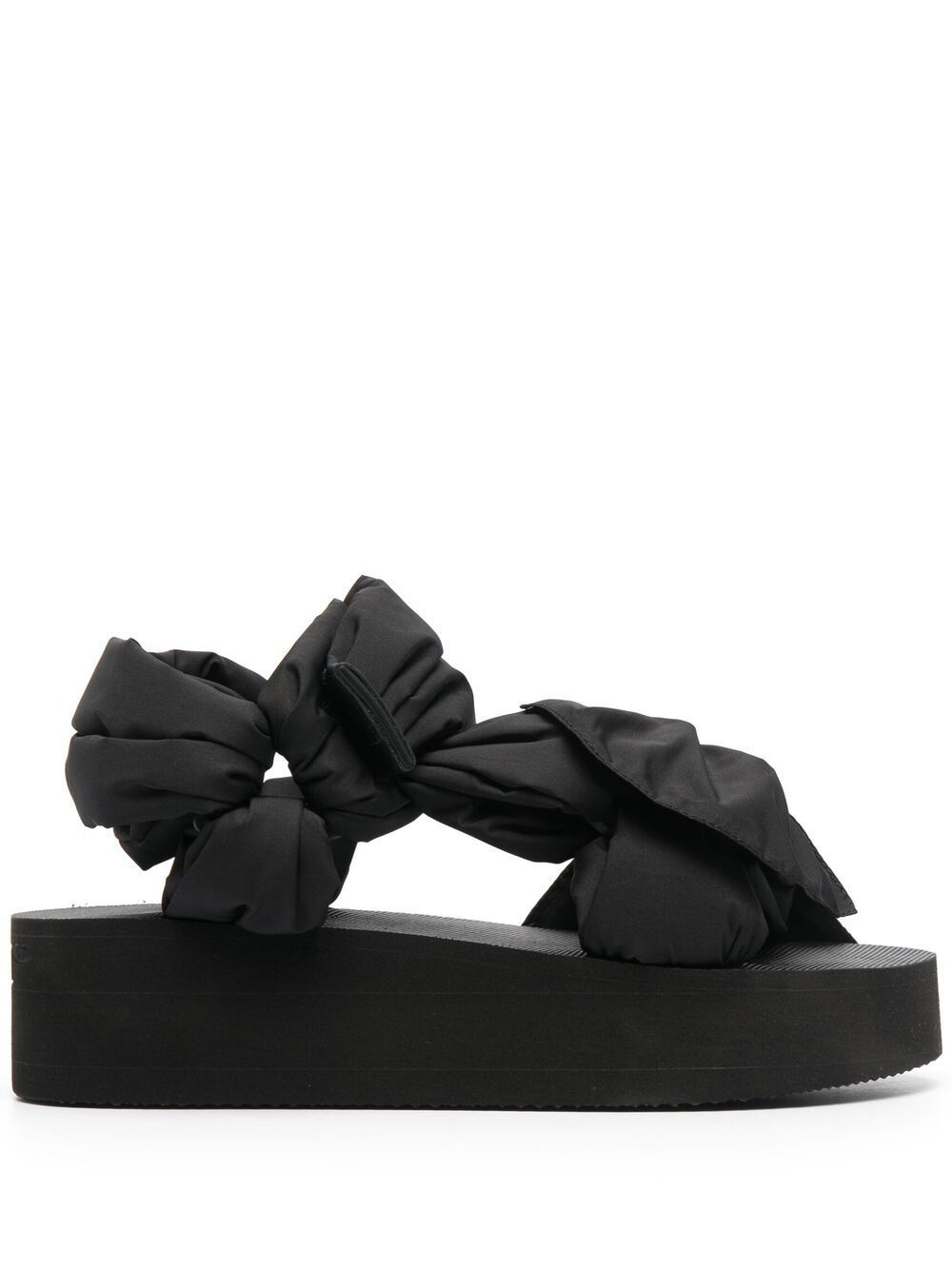 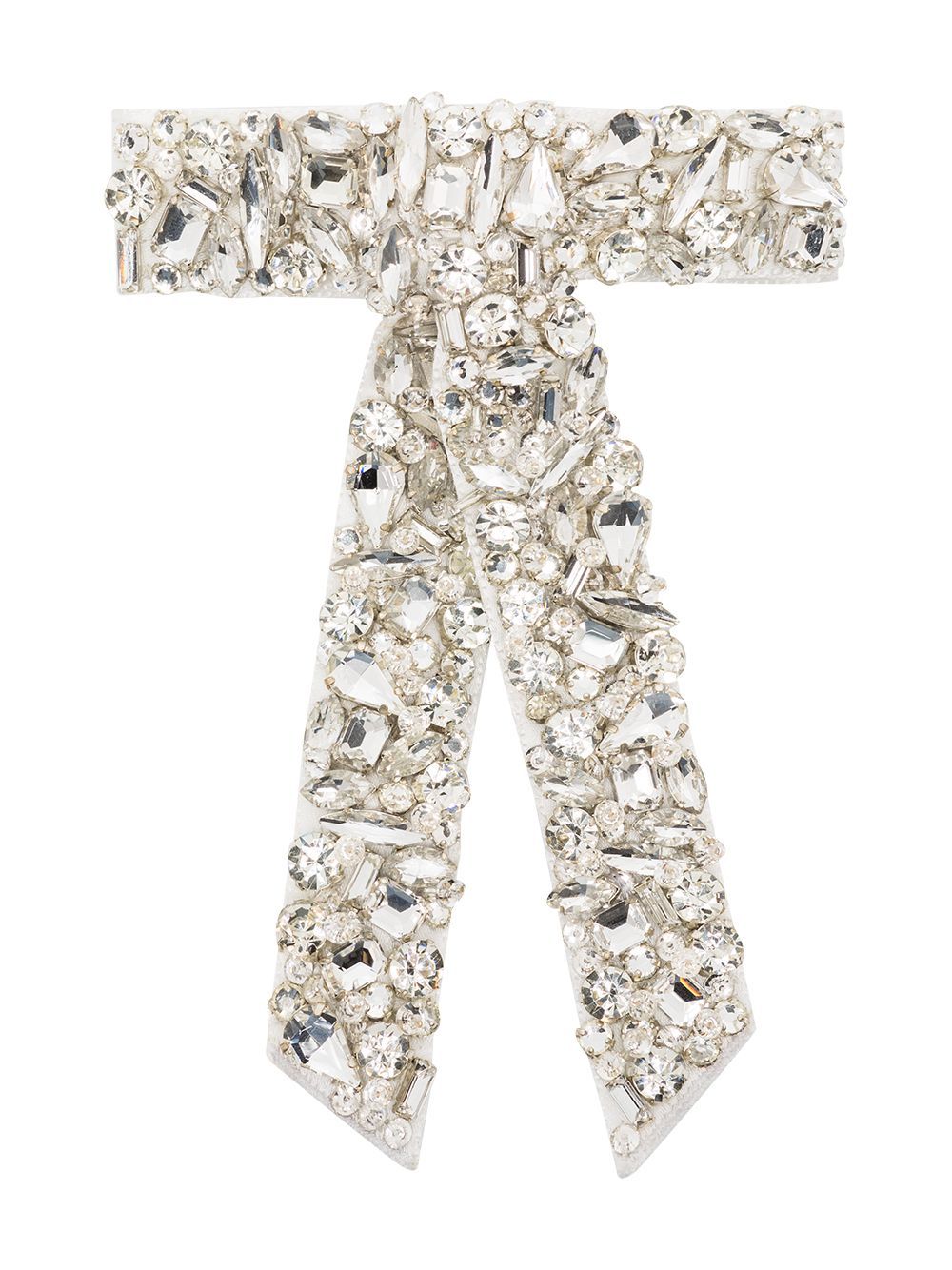 At the same time, bows have so much range that they’ve also been used as a mark of resistance. Bows were worn as ribbon cockades in the French Revolution, and on hats as a sign of defiance against Hitler during World War II. “French women would adorn their hats and later their turbans with ribbons and other scraps of fabric they scrounged in defiance of the German’s rules against extravagance,” Collins explains. And they’re common in schoolgirl uniforms around the world, from Asia and Russia to right here in the United States, where ribbons are worn in the hair and bows decorate the collar and embellish other parts of the outfit. The fact that bows can symbolize so many different things—from royalty to revolution to girlishness—is perhaps one of the biggest reasons that they feel so right in 2021.

Fast-forward to the 1960s and 1970s, when the bow became a symbol of women’s workplace empowerment in the form of the pussy bow top, which appeared on runways from Yves Saint Laurent to Halston. (Since then, it’s been re-created everywhere from Gucci to Balmain.) In the ’80s—an era that contemporary fashion has been mining lately—wearing a bold bow was a way to harness the intrinsic glamour of standing out from the crowd. In their own ways, both Madonna and Princess Diana (whose style is experiencing a fashion renaissance thanks in part to the release of the film Spencer) showcased the power of an ’80s bow. 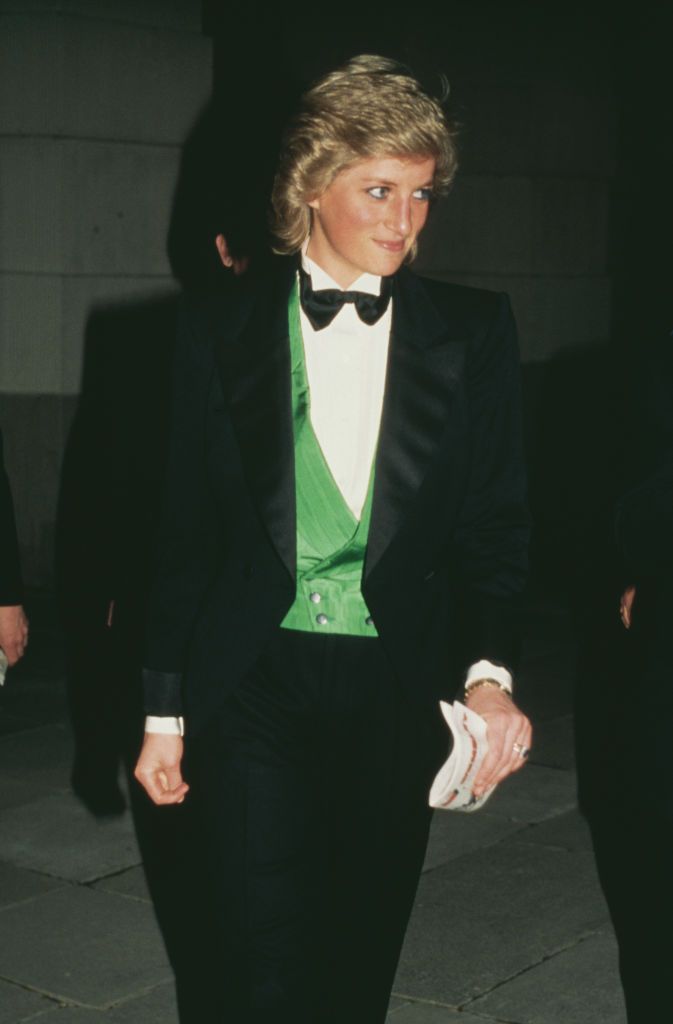 The bows of spring 2022 draw on all these references, but add elements of individualism. Look at Comme des Garçons’ massive sculpture-like structures covered in chunky bow prints (Rei Kawakubo essentially said the collection was about getting rid of the conventions of fashion). Or Richard Quinn’s neat and plump bows, which are placed atop otherworldly catsuits and tied under the chin from babushka-like scarves. These bows are about personal style, strength, and power. “To me, ribbons and bows represent femininity and innocence,” Horst adds. “I love that they are a whimsical and dreamy outfit-completer that is not necessarily meant for the male gaze.”

To me, wearing a bow as a woman in 2021 feels more like a statement of power than anything else. Instead of being about satisfying a rule like uniform guidelines or pulling one’s hair back to be more conventionally presentable, wearing a bow is firmly about dressing for oneself.