"Yeah, I guess. Twenty-something? Wait – let me get a calculator." 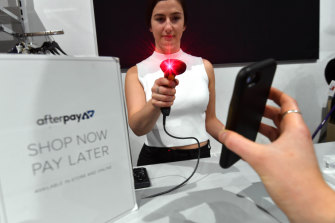 It's around 5pm on a Tuesday at the Topshop on George St in Sydney. The sale signs are out the front and the place is packed with women who weren't born when the city won its Olympic bid (although some might just be old enough to have vague memories of attending an obscure sport – walking, archery – in a stroller when it came to town). In front of rows of jeans, a group of women with uni course readers in hand are performing a mathematical calculation that is becoming more and more common: what's the Afterpay price for this?

At Topshop, the Afterpay logo appears under the store's name on signage, reminding teenagers walking through with their backpacks (there's even a weekly student discount) they should only be thinking about 25 per cent of the price tag they see on that pair of Alexas.

It's far from alone. The Supré website, selling "new styles from $15", instructs its young visitors to "shop the latest trends with Afterpay". When logged into your Afterpay account, you can browse through offerings from Dotti, Bardot and General Pants. Throughout the Spring Racing Carnival this year, lifestyle Instagram influencer and stylist Jules Sebastian appeared on morning television billed as an "Afterpay stylist".

In two short years, Afterpay has managed to sew itself seamlessly into Australian fashion retail. Based on the premise of paying a quarter of the price of an item now, followed by three more 25 per cent fortnightly instalments, Afterpay is the payday loan for people who never thought they'd use a payday loan because, as its marketing points out: you "pay nothing extra when you pay on time".

This is, of course, completely fine because everyone knows there's a direct correlation between the demographic which shops at Supré and a stable income to service multiple personal loans! If there's one thing we know about younger women, it's that they're incredibly financially secure. Right?

Oh, wait. Actually, according to the 2017 Universities Australia Student Finances Survey, 58 per cent of domestic university students say their financial situation is "often a source of worry" for them and 34 per cent report their expenses often exceeding their income.

In their defence, Afterpay does have procedures to stop people from borrowing too much and, since mid-last year, a cap on its fees (for a spend between $40 and $272, the possible late fee is capped at 25 per cent of your order value; $10 for the initial transgression, an extra $7 if it's a week late, and it goes up from there to the cap). You can only have an Afterpay account if you are an adult and they make the bulk of their money from charging retailers for signing up, not from debt collection.

But it's interesting that at a time when the fashion industry is pushing sustainability hard, so many brands have become buddies with a service designed for instant gratification; for buying now and paying later. Buy a dress for the races now and you'll be able to finish paying it off throughout December: a time of year notorious for measured spending!

I think it is also interesting that, at a time when Generation Z seems to be at the forefront of this push (a climate striker can op shop like no one else), the brands which cater to them are providing this instead.

Afterpay's marketing says it exists to "empower" customers. But, when that woman in Topshop was being told to think about 25 per cent of her price tag despite really putting herself up for a possible additional 25 per cent (and already having a pair of jeans on her legs), was she empowered? I don't know.

Melissa Singer is on leave.